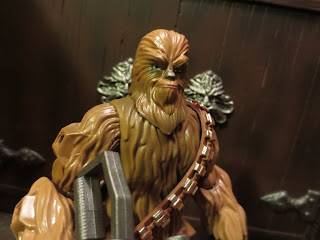 Can you believe it? We're only a couple of days away from the release of Star Wars: The Force Awakens! Today I'm looking at a character from the Original Trilogy who made appearances in one of the prequels (Revenge of the Sith) and in Clone Wars and who will return for The Force Awakens: The mighty Chewbacca! My little two-year old loves Star Wars Hero Mashers and she loves Chewbacca (her Chewbacca impression is incredible) so this figure has been a huge hit. I managed to steal Chewbacca away from playtime long enough to review him here. Ready for a closer look at everyone's favorite Wookie? Then join me after the break... 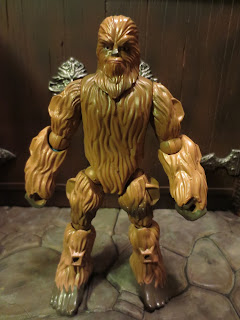 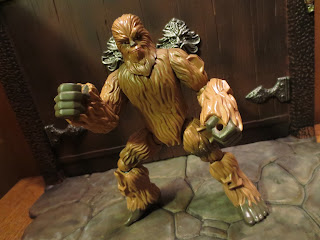 *Having reviewed so many of these Hero Mashers over the past few months, I'm largely repeating myself here: These figures are fun, durable, and the ability to mix and match the head and limbs with other figures is pretty cool. I also like that Chewbacca is taller than most other figures. This isn't a line that slaves over accuracy and such but I'm glad that Hasbro kept that little detail. 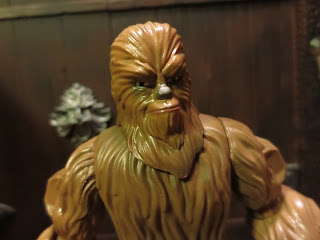 * It's funny to see a character like Chewbacca in this style. He's definitely recognizable although there is definitely something comical about his appearance. I like that Hasbro didn't just go with a solid brown paint job, opting to mix in some darker colors into his fur. It makes for a nice, fun Chewbacca for the younglings. 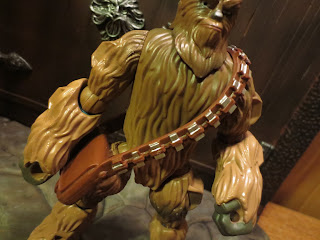 * I really like that Chewbacca's satchel and bandolier are a separate piece from the main torso. Not only does this help give you more options in mashing these figures up but it also just makes for a cooler looking figure. 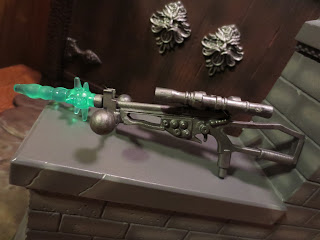 * I friggin' love this Bowcaster! It's really well detailed, pretty authentic, and it features a green bolt of energy flying out of the barrel. Chewbacca looks great wielding this against his enemies. Seriously, I think this is even a bit cooler than the Bowcaster that comes with the Black Series Chewbacca. It's large and impressive, just as it should be. 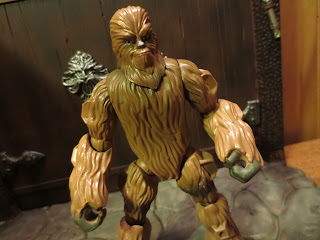 * I have to admit that I'm not sold on the body of Chewbacca. He looks kind of odd. The arms and legs look fine but the torso itself just has a bizarre appearance to it that I can't quite put a finger on. While Chewbacca is tall and muscular, he's really not that thick but this figure makes Chewie look like he's been snacking on too many Jawas. 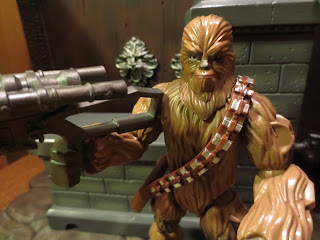 I'm going to cut to the chase here and say that I really like this figure. The body shape throws me off a bit but once you've got him wielding his Bowcaster and wearing his satchel it becomes less of a problem. This is a Great figure in this series and this series has turned out to be a really fun Star Wars line for kids and collectors who want something a bit different. These figures are pretty easy to find and stores seem to actually be restocking them, unlike the 6 inch and 1/18th scale figures. If you're a fan of Chewie, head on out and track him down. He's quite fun and should bring a smile to any Star Wars fan's face!

If you're a big fan of Chewie then you'll want to check out my review of Chewbacca from The Black Series Phase II!