Action Figure Review: Prince Adam (Laughing) from He-Man and the Masters of the Universe by Super7 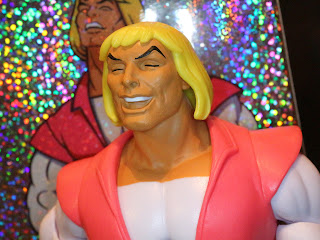 While my wife no longer thinks it's funny, I still find the Fabulous Secret Powers/ "HEYYEYAAEYAAAEYAEYAA" video hilarious, especially the part that features the cover of 4 Non Blondes' "What's Up?" Super7 still thinks it's funny too and that's why they releases this action figure of Prince Adam laughing/ singing as a 2018 SDCC exclusive in the He-Man and the Masters of the Universe line. While I've not been a huge collector of the more Filmation focused line (I love the Filmation cartoons but I'm most interested in figures that mesh well with Masters of the Universe Classics) this was one I couldn't pass up. Let's check out this rocking version of Prince Adam after the break... 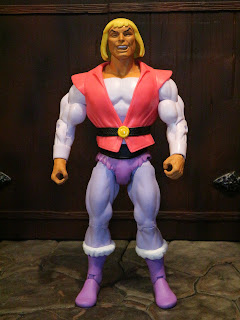 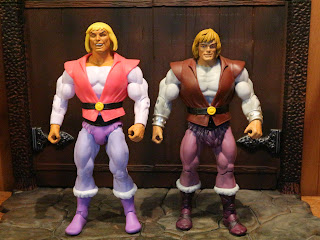 
* Here's a quick comparison of the MOTUC Prince Adam (on the right) and the Laughing Filmation styled Prince Adam (on the left). They share a lot of parts but the portraits are unique (the laughing Adam's head sits up way higher) as are the loin cloths, lower arms, hands, and the boots. 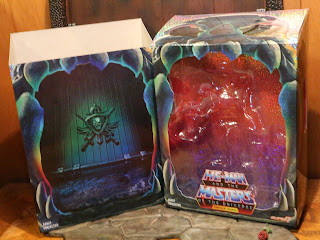 * I really do like the packaging on the He-Man and the Masters of the Universe line but I rarely talk about packaging. This figure's packaging fits perfectly with the figure, however, as it features a sparkly, glittery, rainbow motif in the background. Perfect for some singing, right? 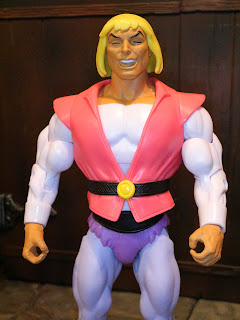 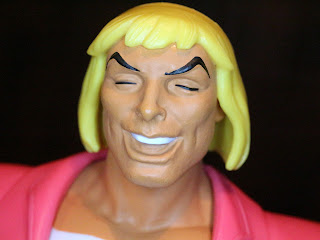 * I'm going to discuss some problems I have with this headsculpt in a moment but I do love the look of the laughing face. It perfectly captures the over the top craziness of the viral video and the lovable silliness of the Filmation series. I wish it were more easily removable so other He-Man figures could use it! 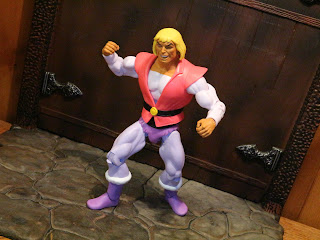 * The articulation is as good as nearly any other MOTUC or He-Man figure and even a bit better thanks to the swivel/hinge ankles and wrists Super7 has given the figures. It's pretty fun to pose this guy in all sorts of strange and fabulous dancing poses! 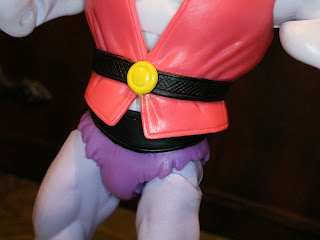 * To stay true to the look of the Filmation series, Super7 has given Adam a shorter, less detailed loincloth with a simpler belt. 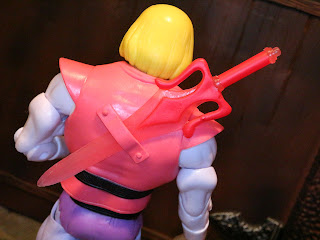 * The back of Adam's vest features a strap to hold the Power sword in place. The MOTUC Prince Adam was supposed to have this feature too but apparently it was missed during production. 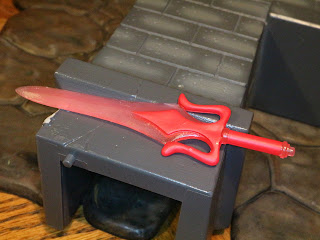 * Adam features the Power Sword molded in translucent pink with a bright pink hilt. I like it as it adds something unique to the figure and matches the funky, colorful vibe of the video. 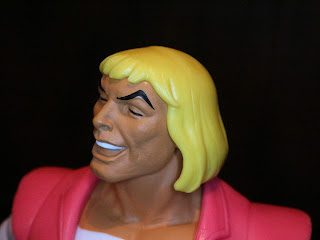 * I don't think the colors are right on this. Adam's skin is really, really tan. Too tan! And his hair is a very standard yellow rather than the darker yellow of the cartoon. Considering how Super7 has really cut out the detailing on these figures to be super faithful to the animation style, you think the colors would be right. 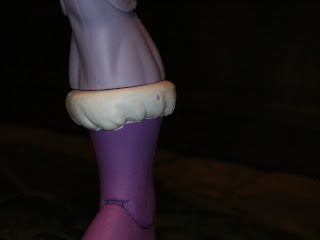 * Adam's boots are stylish but there is quite a bit of paint slop here. There's purple on the white fur cuff and white on the purple boots. 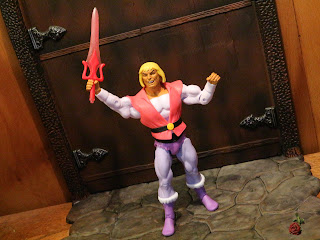 This laughing Prince Adam is absolutely a joke figure. He's based on a viral video and is just completely silly and fun. He's as far as a figure can possibly be from the classical barbarian-fantasy figures like the original 8 figures, Vikor, Demo-Man, and others. Still, he's really fun. Of course, at 35 bucks and with the odd color choices for Adam's hair and skin this figure definitely has a few issues. He's still Good and a fun addition to an ever expanding line, but he could have been absolutely amazing. Having Mr. Cringer-pants included would have been a real bonus, too!


He-Man/ Prince Adam is one of my favorite characters and I've reviewed quite a few toys of him: The Series 3, Series 2 and Series 1 M.U.S.C.L.E. He-Man and Prince Adam minifigures, plus the Masters of the Universe Classics Galactic Protector He-Man, the future King He-Man, Laser Power He-Man, Snake Armor He-Man, and Flying Fists He-Man, and the Funko VYNL Prince Adam + Cringer set.


For more He-Man and the Masters of the Universe reviews, check out the following: