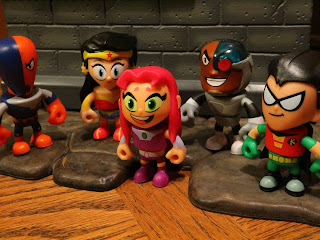 A little over three weeks ago I reviewed the first of two 5-packs of Teen Titans Go! The Movies minifigures from Mattel. Released alongside the movie this summer, most folks probably never saw these because they were probably intended for distribution at Toys R Us, the only store that seemed to ever consistently carry Teen Titans Go! merchandise. Fortunately 5 Below was carrying these at the end of last year which made these an attractive pickup. Teen Titans Go! To The Movies was a great superhero flick and I really enjoyed it. These figures are fun, too. Plus, you get a minifigure of "DC Comics Slade." Yup. That's exactly what the packaging calls Deathstroke. DC Comics Slade. This is clearly one of those "we don't want to use the name Deathstroke on the packaging of a kids toys but Slade is just too generic so we gotta identify him" scenarios. Anyways, let's check out this set that gives us three more Teen Titans, another key member of the Justice League, and a villain after the break... 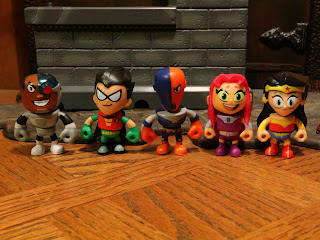 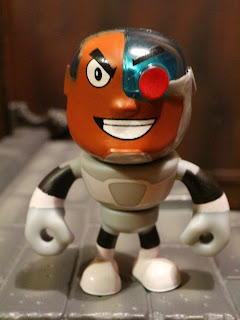 * Cyborg is definitely in the running for my favorite member of the Teen Titans Go! cast. He's just so gleefully awesome and obsessed with fun. Whether it's a meatball party or declaring his love for pie, Cyborg is just a great big mechanical ball of energy. The figure is cool, too. 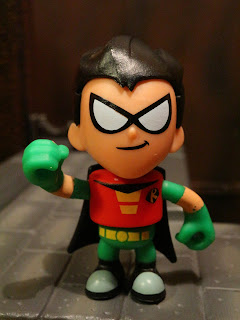 * Robin's kind of the star of Teen Titans Go! and his is a nice standard version of him. The face printing is sharp, there's a nice bit of detail on the body (the bodies are all pretty standard with printed details), and the hair is perfect. I wish he came with his staff, though. Without it, he can't conduct staff meetings. 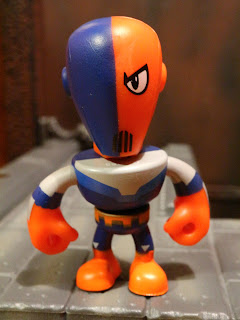 * OK, I made fun of it earlier but they really do call Deathstroke by his first name of Slade in the film. It's not just a toy thing. This is a pretty traditional, although a bit plain, looking version of Deathstroke. You know who voices him in the film though? Will Arnett. So the guy who voices Batman in the Lego movies now voices one of his adversaries. Pretty crazy, right? 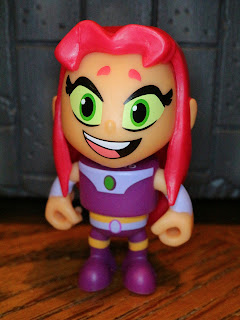 * Just look at Starfire's face! Can't you just hear Hynden Walch's voice? This is a great likeness of the character and a really fun toy that captures Starfire's bubbly, outgoing personality. I love it! It's bright, colorful, and fun. Just like Koriand'r! 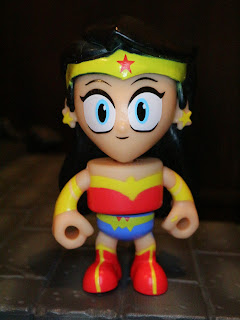 * Last, and never least, is Wonder Woman! Wonder Woman looks very stylized, perhaps even more so than some of the other characters. She played a big part in the marketing of the film and it's nice to have her so that we can have DC's big three in this line, too. 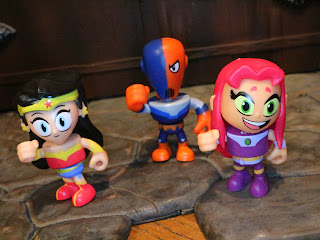 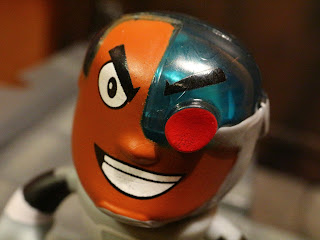 * I really like that Cyborg's head is translucent. It's molded in a see through blue plastic and it just makes the figure that much cooler! 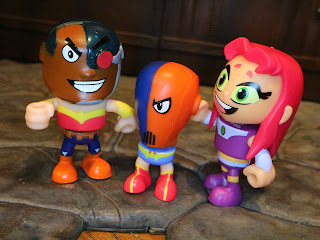 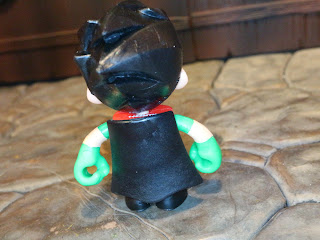 * Robin has a removable cape. All of the figures have holes on their backs to hold capes so you can swap the cape around if you like. 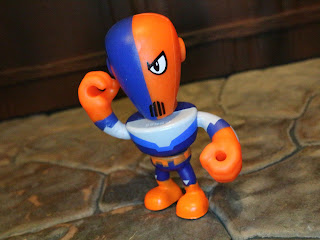 
* The figures all feel a bit rubbery. I actually purchased one of the blind bagged Teen Titans Go! figures over the summer and I felt the same way. I wish the plastic was a bit firmer and less wiggly feeling, especially at the joints. 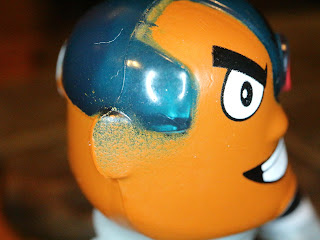 * The paint around Cyborg's head is kind of rough. The transition between the translucent skull and his skin is just not pulled off well at all. 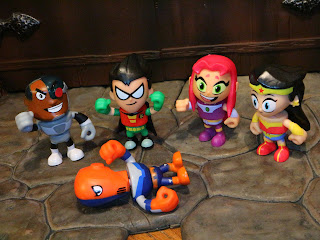 I enjoyed the first set of these I reviewed but I actually like this one even more. The characters are all winners and some of the figures are just so, so good (especially Starfire and Cyborg). They stand up better, too, and have less warping going on. Even had these been available at their normal retail price they would have been a Great set but getting these for less than $5 bucks is a steal. If you haven't already, shop around for these. They're cool little minifigures for DC fans, especially if you enjoy the over the top goofiness of Teen Titans Go! Check out the movie, too.It's great. Plus, it's the only DC movie that Stan Lee is in.

I've reviewed a few other Robin figures based on the various characters who have worn the costume. I've looked at the Lego Arkham Asylum Breakout which included a Tim Drake Robin as well as the Multiverse Damian Wayne Robin, DKR Carrie Kelly Robin, and Duke Thomas in his "We Are Robin" gear, as well as the Nano Metalfigs Robin that comes with the Batcave playset and the DC56 Robin- Tim Drake and the DC 102 Robin from the second 20 pack. If you're looking for more reviews of Dick Grayson/ Nightwing stuff, I've also looked at the Lego Batman: Man-Bat Attack which includes Nightwing, the Kenner Legends of Batman Nightwing, the DC Icons Hush Nightwing, and the New 52 Nightwing.

For more of, Starfire I've reviewed the DC Collectibles Starfire from the Red Hood and the Outlaws line and the DC Super Hero Girls Starfire.

For more figures from Mattel's Teen Titans Go! To the Movies, check out the other set:
Batman, Jade Wilson, Beast Boy, Superman, and Raven 5-Pack
Posted by Barbecue17 at 1/22/2019