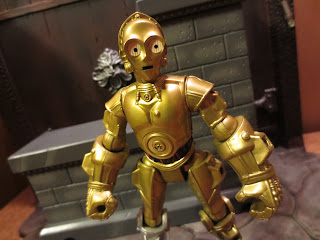 Today I'm taking a look at a figure in Hasbro's Star Wars Hero Mashers based on a character from the classic Star Wars trilogy who appears both in the prequel trilogy and the upcoming The Force Awakens: C-3PO! It's great to have a classic character such as C-3PO in the Star Wars Hero Mashers line. If you've been reading my reviews of these, you know that I'm really collecting this line because my little 2 year old loves them. She's crazy about these toys now and is really embracing the characters, too! While I'm waiting for a C-3PO to show up in the Black Series, Hasbro has still given us a pretty cool version in the Hero Mashers assortment, part of the 2nd wave of figures. Ready for a closer look? Then join me after the break... 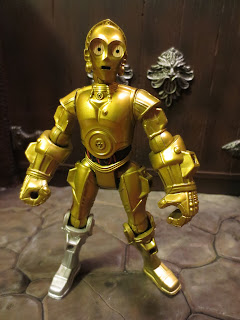 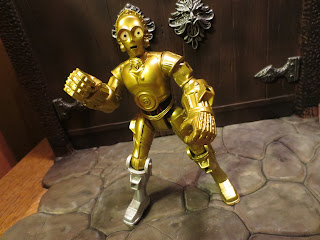 *C-3PO doesn't need that much articulation to do what he needs to do but Hasbro threw it in anyways. He's a solid and durable toy that I've enjoyed posing and my 2 year old daughter likes to play with. Hard to beat that. These are quality products that are really a blast. 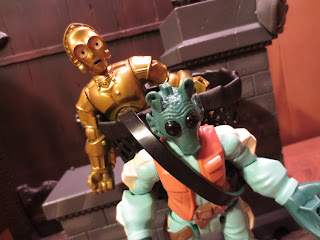 * The main gimmick of these toys is that you can combine the pieces of the figure with other figures. Want to give someone a robotic arm or leg? Give them one of Threepio's. Of course, the best thing you can do with this figure is remove his parts like when he was dismembered on Bespin. That's a fun, film accurate action feature for this guy. He even comes with a backpack to carry him in. If a battle droid ever comes out, you could swap his head with C-3PO's, too. Lots of options here. 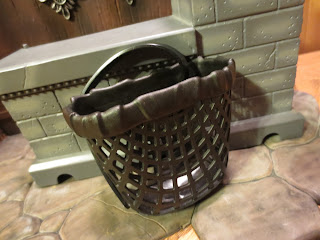 * Here's a better picture of the backpack. It's made from a somewhat flexible plastic and is definitely intended for Chewbacca (the only series 2 basic figure I didn't find the day I picked up everyone else) to carry Threepio around in. It has a shoulder strap but it also plugs into the port holes in a figures pack for extra stability. 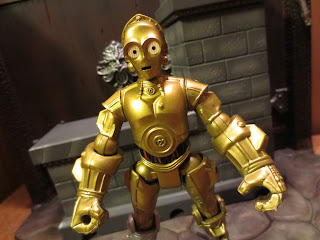 * This is a beautiful, beautiful C-3PO sculpt. It captures the elegance of the protocol droid's design while also embracing the design aesthetic of the Hero Mashers line. C-3PO just looks absolutely amazing. I love the paint work here! The gold color is beautiful and I'd much prefer this on any future C-3PO figures than vac-metal (which always looks cheap and cheesy to me). Threepio's eyes are incredible looking, too! Seriously, I'm impressed by this one. 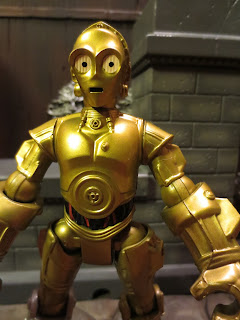 
* To be honest, I don't have any. I really think this is one of the best C-3PO figures I've owned. Sure, it's not designed to fit in with one of the more traditional collector oriented lines or anything but it's still just incredible. The paint work, the sculpt, and the overall look of he figure just wow me. C-3PO's essence and personality really shine through in this little 6-inch plastic fellow. Now let's just hope that we get an R2-D2 in this line. 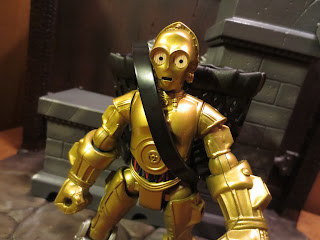 I really like this figure! He makes me very eager to see Hasbro complete the original cast of characters from A New Hope in this style (we still don't have anyone else yet). Heck, we need many of those characters in the Black Series too. I'm really surprised that Hasbro hasn't released any named The Force Awakens in this series (the only two figures are a Resistance Pilot and a First Order Tie Fighter Pilot with the two larger vehicles) but at least C-3PO is a character that toy buying tykes will see in the movie and recognize. This guy, to me, is an Epic rendition of C-3PO. He's really just a beautiful toy!

I haven't reviewed any other C-3PO figures yet on here though I have reviewed plenty of other Star Wars Hero Mashers, including: