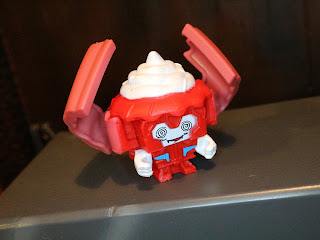 I've never been much of a Transformers fan. I remember having a few G1 and G2 Transformers as a kid, obtained from random places, and I had a couple from the first Michael Bay film, but that's about it. I have a couple of Optimus Prime items, such as a Christmas ornament and a Mighty Muggs figure, but mostly it's a property I've just never been drawn too. Of course, when I heard about Transformers BotBots, a kind of hybrid Transformers/ Shopkins minifigure line, I was pretty interested. The fact that these are disguised as little random household objects definitely appealed to me so I began hunting these down. They're available in mulipacks (5 and 8 packs) and in little blind boxed single packs. I pulled the subject of today's review, Frostferatu, out of a single pack from a Wal-Mart. Wal-Mart hasn't been stocking these with the other Transformrs or with the Shopkins styled toys. Instead, they're hanging out in the stocking stuffer bins that have been near toys. Those will probably go away soon, so who knows where these will end up after that? Let's check out the first figure I picked up, Frostferatu: The Mystical Cupcake Vampire! 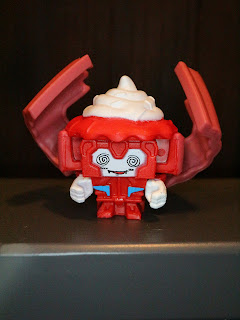 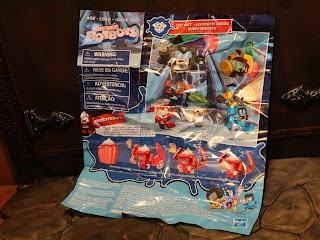 * One thing I really like about these is that every one of the blind bagged figures come with an instruction guide that gives the character's name, their team affiliation, and shows to how transform them. Frostferatu is one of the Lost Bots although he seems like a shoe in for the Sugar Shocks. 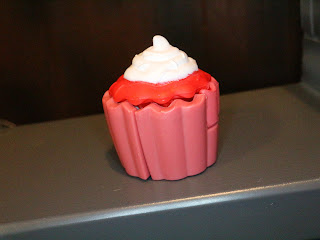 * Frostferatu's disguised form is a cupcake. Yup. A pinkish-red cupcake iced with vanilla frosting. Delicious! Seriously, looking at this guy in his disguised from definitely makes him appear more like a Shopkin or Num Nom. Little does an unsuspecting onlooker realize the deliciously evil presence trapped inside of Frostferatu's wrapper... 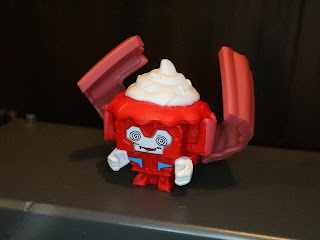 * Muahahahaha! Yes, the sides of Frostferatu's wrapper fold up to look like an extended cape, revealing the vampire inside. His hideous visage features sharp fangs and terrifyingly hypnotic eyes! His arms swivel as well, which is kind of cool. Bleh bleh! 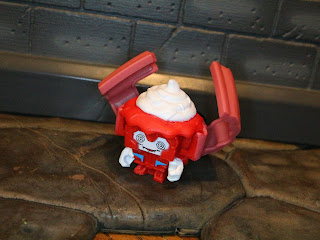 While I've never been a huge Transformers fan, I've always been fascinated by toys that transforms into random objects stuff like Computer Warriors or Army Gear. That's probably why these are such a hit for me. While they're not the best robots nor the best disguised objects (no one is going to believe this is an actual cupcake in the same way that the Computer Warriors Pepsi can looked pretty legit) but the fact that they're minifigures and they're pretty fun designs is cool. Frostferatu is a Great little minifigure/ Transformer and I think he's a big hit. He's much cooler than a lot of the other blind bagged stuff on the market right now for sure.