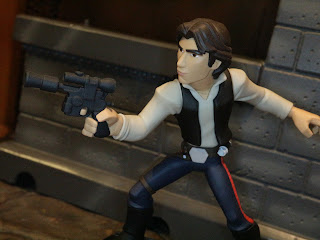 Today is the last Saturday in March and this is the last review in my miniseries of reviews focusing on random Han Solo toys I have sitting around. The action figures for Solo: A Star Wars Story should be hitting stores quite soon (some lucky nerf-herders are already finding them) so there will be plenty of Han Solo reviews coming next month. Today, however, I'm wrapping things up with a review of the Disney Infinity Han Solo from series 3.0. While Disney Infinity was officially cancelled in 2016, it did leave behind a very cool style of figure that Disney is still using in a series of Disney Store exclusive action figures. The concept of Disney Infinity is that these are action figures which come to life so there already is a very toyetic quality to each figure in the line. I actually won this as part of a prize package for a Star Wars Reads Day contest at my local public library (my daughter's package has Kanan Jarrus in it), making it one of the only two Star Wars Disney Infinity figures I own. Let's take a closer look at this very cool, very classic Han Solo after the break... 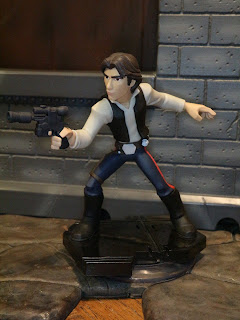 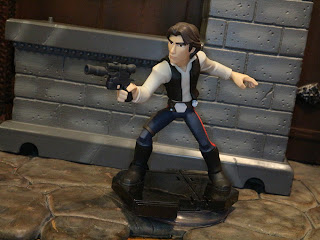 * While these were originally game pieces for a Skylanders like video game that was just so-so, when you remove the electronic aspect they're just good old non articulated figures. Maybe too large to be called minifigures but the concept is pretty similar. When you're dealing with a static figure the pose is significant and Han's is great. He's posed in a great blaster dueling pose! 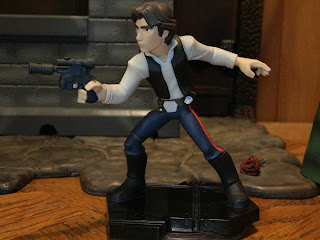 * The paint work is excellent on this figure. The Disney Infinity figures have very clean but very simple paint jobs. Han's outfit is so classic and instantly recognizable. 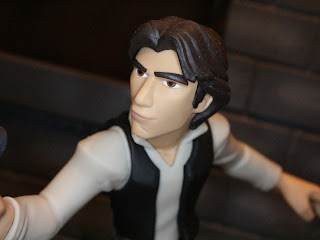 * Time and time again it has been said that Harrison Ford has a likeness that is just insanely difficult to capture. Here, though, Disney went with a caricatured appearance and it works really well. It's definitely Han Solo even though it's not Harrison Ford as Han Solo. Seeing this likeness definitely causes me to lament the fact that Indiana Jones never got a go in the Disney Infinity universe. 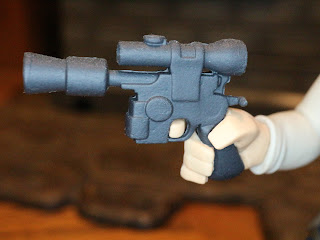 * Han's BlasTech DL-44 looks really cool here. It also is stylized and looks kind of like an updated version of the vintage Kenner version of the pistol rather than a film accurate version. That's a cool detail that fits with the game's "action figures brought to life" aesthetic. 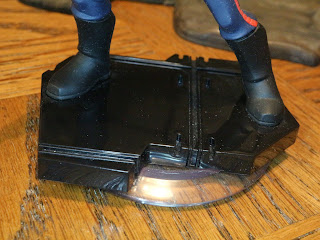 * While the base is necessary for the video game to function (the figure unlocks the character in Disney Infinity 3.0 and serves as a memory card of sorts for the character's level), it also just looks really neat. I'm a sucker for any figure with a base, even if they're non articulated. 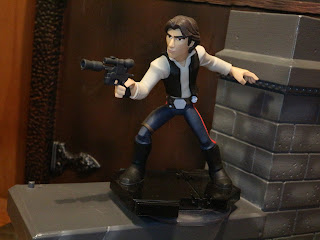 At this point this line is now completely defunct and the trend of video game/ toy hybrids definitely seems to be a dying trend, too. Lego Dimensions and Disney Infinity are gone while even Skyrim and Nintendo amiibo seem to be waning. Still, it was a cool experiment that produced a few neat toys with the Disney Infinity figures seeming to be some of the best. Han Solo is a Great figure with excellent sculpting and a fantastic aesthetic. To be honest, I wouldn't mind tracking some more of these down in the future just because of how cool they look.

For more Disney Infinity, check out the following: