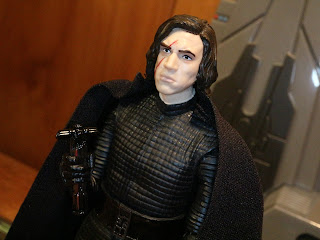 Today, by reviewing the deluxe Wal-Mart exclusive Kylo Ren (Throne Room) figure, I will have reviewed every Star Wars: The Black Series figure that was revealed on Force Friday 2017 (DJ and Rey (Island Journey were revealed a bit later). This is the fourth of these deluxe releases to be put out for The Last Jedi. I like getting deluxe figures with more stuff and display pieces but I kind of wish Hasbro would plan these out a bit better to give us the characters in truly different outfits. Still, this version of Ben Solo is definitely an improvement over the standard figure (which was a pretty good figure already) so it's worth checking out. More after the break... 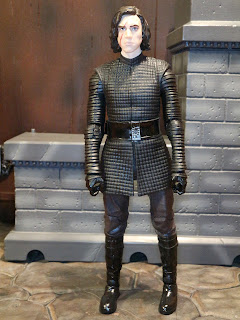 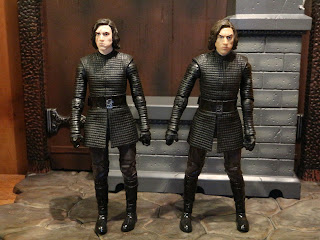 On the left is the Wal-Mart exclusive Kylo Ren. On the right is the standard Kylo Ren. From the neck down they're exactly the same. The headsculpts are different, however, so I'll show that off. For more details on the figure's general bodysculpt and articulation, check out my review of the basic figure. 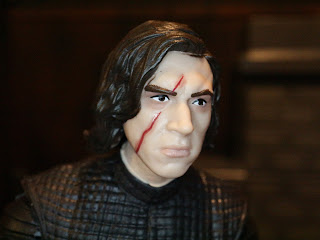 * I liked the headsculpt on the standard figure but this one is even better. The portrait is sharper, the expression is a bit meaner, the scar is far more pronounced, the paint work is cleaner, and the detailing on the hair is crisper. It's a really good headsculpt and definitely a reason to opt for this figure over the standard release if you're going to pick just one. 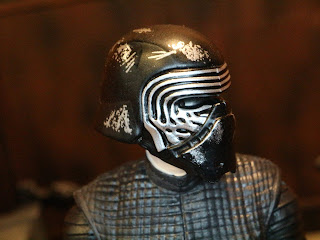 * Another unique aspect of this figure is the die-cast metal helmeted head. It's a good version of Kylo Ren's helmet with lots of scuffs all over it. I do wish the figure had included a destroyed version of the mask from after Kylo's recent temper tantrum, though. 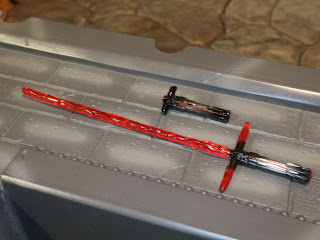 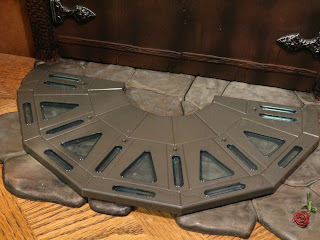 * Kylo Ren includes the floor from Supreme Leader Snoke's Throne Room. The floor is a semicircle that features translucent blue panes of plastic embedded in. It's quite large and makes for a nice display piece. Plus, it attaches to Snoke's throne. 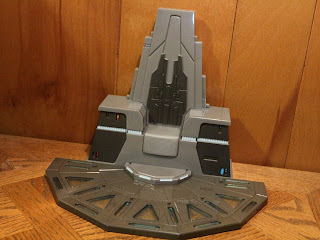 * Here's a pic of the floor attached to the throne that was included with the Gamestop exclusive Supreme Leader Snoke. Maybe you can pick up Snoke for half off now. Heh heh. 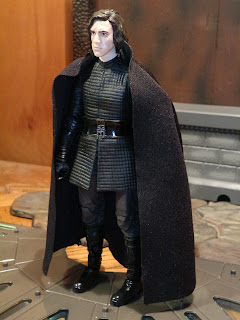 * One of the selling points of this figure listed on the packaging is that he includes "fabric costuming." It's a simple fabric cloak that rests over his shoulders. It rests there OK but it looks a bit plain, especially after the early publicity shots showed a very cool pattern on the cape. This one is kind of blah and I find myself liking the plastic cape on the standard figure a bit better. 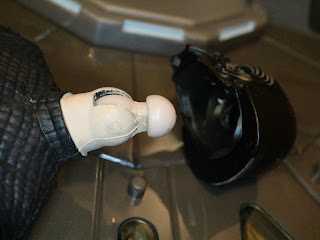 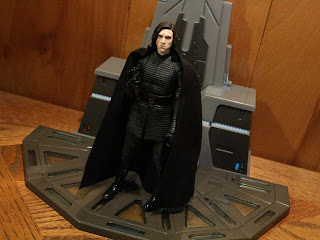 Kylo Ren (Throne Room) is an improvement over the standard release, but it's also almost twice the price for some minor improvements (and possibly one detriment considering how the fabric cloak turned out). Kylo Ren is a Good and a 1/2 release with the higher pricing on these figures making them seem a bit less impressive. I do want to see Hasbro continue these sets with characters deserving of a deluxe treatment (Emperor Palpatine with his throne and window seems like a no brainer) but hopefully more value or slightly lower price would be part of the package, too.

If you're looking for more Kylo-Ren inspired products, check out my reviews of the standard TFA Kylo Ren, the TLJ Kylo Ren, and the K-Mart exclusive Kylo Ren (Starkiller Base) set, as well as the SDCC 2016 Kylo Ren Unmasked. Of course, a miniature Kylo Ren also came with the Micro Machines First Order Star Destroyer playset. Oh, and there is the Micro Machines Kylo Ren Playcase, too!