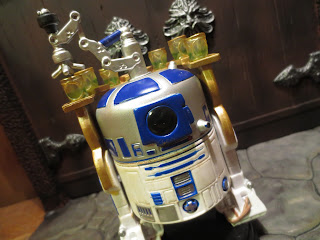 My Smuggler's Bounty box just came in the mail last week and I was pretty excited to find another Star Wars POP! exclusive to the subscription. This time the theme is Jabba's Palace and the exclusive POP! is R2-D2 carrying around a tray of drinks on Jabba's sail barge. While I was hoping for an unusual character from Jabba's palace (maybe Oola or Max Rebo) this is definitely a cool variant. R2-D2 is always a hit! Mix in the drink dispenser and the tray and you have a fairly intricate POP! Ready for a closer look at nearly everyone's favorite astromech droid? Then join me after the brea as we look at Bar2-D2... 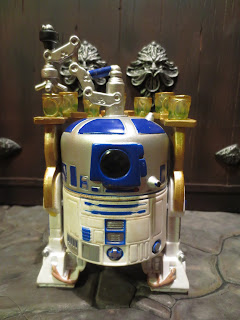 Height: 5 inches (to the top of the drink dispenser)

Non-Scalper Price: $25 as part of a set which also includes a Gamorrean Guard pin, a Boushh patch, a Jabba the Hutt mug, a C-3PO baseball cap, and a Boba Fett plush (which my little one promptly requisitioned). 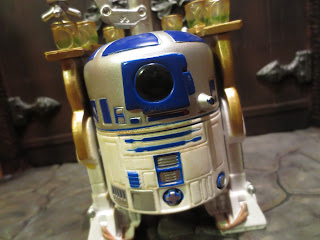 * R2-D2 looks incredible! I think I've finally decided on what the appeal of POP! figures is: They're stylized without looking deformed and cute without looking "cutesy." R2-D2 really pulls off the perfect blend between having a movie accurate sculpt while still looking fun and toy like. I love how his dome is not quite fully rounded as it captures the POP! aesthetic nicely and differentiates him from other R2-D2 products. 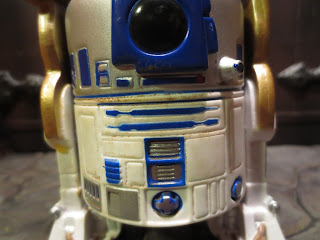 *  Not only is the main paintwork neat and clean but there is actually paint detail added to give the little droid a dirty, worn look. Fantastic stuff! 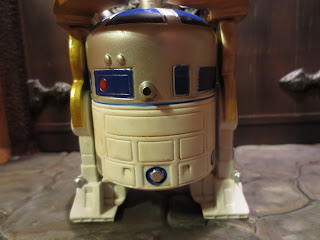 * Here's a look at R2-D2's back. Plenty more detail and solid paint applications here, too. 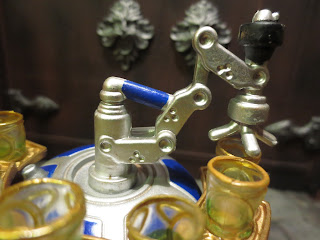 * The drink dispenser looks great. I kind of wish it swiveled but POP!s never seem to have any articulation other than the necks (which Star Wars POP!s don't have, probably due to licensing restrictions). It's really detailed, though, and is probably one of the most elaborate "accessories" I've seen on a POP!. 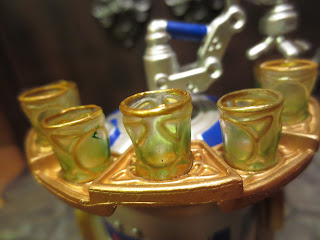 *Check out the cups on R2-D2's tray! These look great don't they? I love the greenish tint and the gold detail on them. 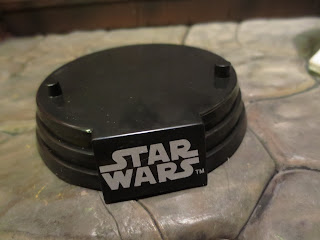 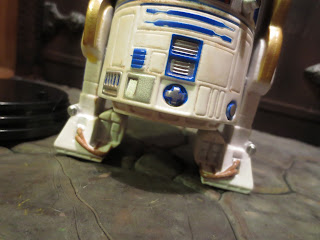 * The only negative I can think of is that I kind of wish R2 had his third leg. It'd be incredibly cool if it were an optional piece that could be added on. 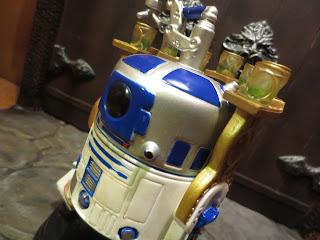 Smuggler's Bounty has been a pretty big hit with my family. We display the POP!s and mugs in ou living room, I wear the t-shirts, and my daughter grabs the stuffed characters. R2-D2 was a pretty big hit for all of us and while I would have liked to have seen a more secondary (or even tertiary) denizen of Jabba's palace, R2 wasn't a bad choice at all. He's a Great and a 1/2 POP! and is definitely one of my favorite releases. Overall I thought the Jabba's Palace box was pretty strong (although I'm not a big hat wearer) and was easily worth the $25 bucks.


If you're looking for more R2-D2 reviews then make sure to check out my reviews of the Micro Machines Classic Characters set, the R2-D2 Playset from Hasbro's Micro Machines revival, and the Black Series R2-D2.