The 12 Days of Christmas: Bounty Hunters from Micro Machines: Star Wars by Galoob 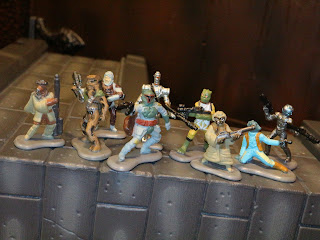 For today's installment of the 12 Days of Christmas I'm checking the last of my 12 favorite toylines of all time and this time we're looking at Micro Machines: Star Wars! Galoob (and later Hasbro's) Star Wars line of Micro Machines is absolutely one of my favorite toylines of all time. We're talking top three here. I've never lost my love for these and I'm always working to add in figures, vehicles, and playsets that I'm missing from the line. Today I'm checking out one of the cool figure packs from later in the line: Bounty Hunters. The Bounty Hunters have always been one of the coolest parts of Star Wars and Galoob delivered by giving us a nice 9-pack of microfigures featuring The Empire Strikes Back 6, Greedo, Princess Leia disguised as Boushh, and Chewbacca in his Snoova disguise from Shadows of the Empire. Let's check these cool guys out after the break... 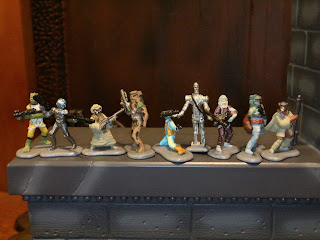 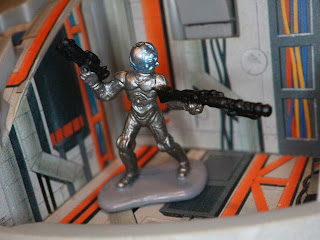 * This set absolutely included all of the bounty hunters from The Empire Strikes Back so we'll start out with 4-LOM, because I'm kind of going alphabetically on these. This one is way better than the 4-LOM from the Mini Head set. I love the more action packed pose complete with 4-LOM's two blasters. He's slick as anything and has some excellent paintwork. 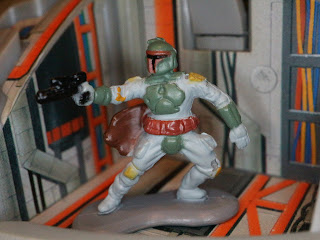 * We received multiple Boba Fetts in the Micro Machine line and while this one might not be the best of them (the Mini Head one is really good) it's not bad. I like the pose, complete with flowing cape and a wide blastin' stance. He does look a little ....heavier.... but that might be because of the paintwork. 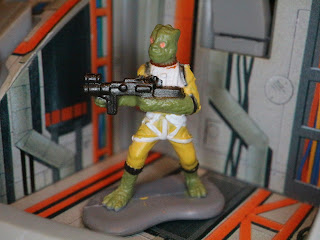 * I've showed off this Bossk microfigure before when I was reviewing the Bossk Micro Head set but I'll show it off again because it's a darn fine microfigure. Seriously, the attention to detail on these it pretty intense. I mean, look at the detail on his Relby-v10 mortar gun! That's insane! I love it! I also dig the bright red eyes, too. 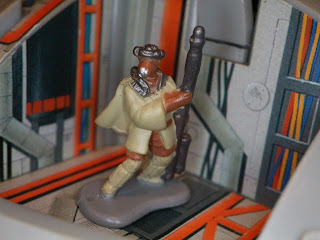 *While the set calls this microfigure Boushh, this presumably is Princess Leia Organa in the Boushh disguise she uses to infiltrate Jabba the Hutt's palace. Galoob released a few different Leia figure in this disguise (one with the R2-D2/ Jabba's Palace transforming set and one in a Mini Head set) but this one is probably the best pure Boushh figure. The pose is cool and the massive blaster staff is nicely rendered. The paintwork on the head is pretty sharp, too. 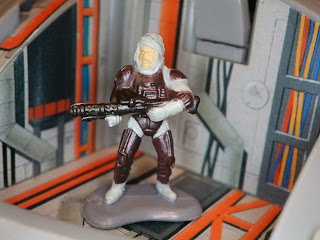 * I do believe that this is the only Dengar microfigure Galoob ever made and, man, the detail is crazy. Check out the scars on his face and the detail on the barrel of his blaster rifle! Holy smokes! This is crazy! Dengar is easily one of the best figure Galoob put out and I say good for him. Dengar is far too underappreciated, anyways. 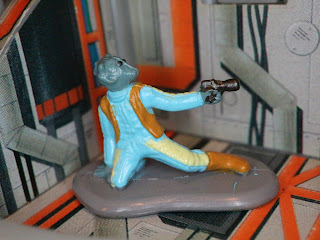 * Look! It's Greedo actually doing something! I mean, I guess Greedo does more in A New Hope than most of the other bounty hunters (other than Boba Fett) do in The Empire Strikes Back, so an action posed Greedo is pretty cool. I actually like the Mini head Greedo a bit better as he's in a bit more of a standard pose, but the detail here is cool. 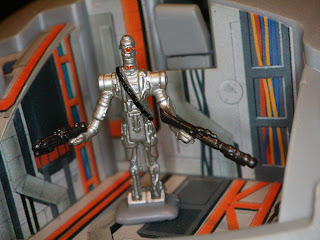 *I believe IG-88 is another character who only received one microfigure in the Micro Machines line. Technically IG-88 was released in the Droids boxed set, but those figures were articulated and out of scale with the rest of the Micro Machines line (they were more in scale with the later Action Fleet series). Oddly, IG-88 has only a small square base, which makes tend to fall over a bit. He looks amazing, however, and comes armed for bounty hunting! 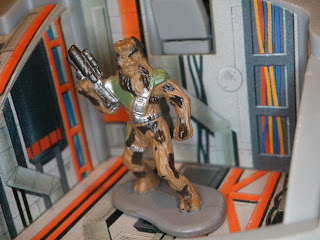 *Snoova! Well, the question here is if this is really Snoova or if this is Chewbacca disguised as Snoova from Shadows of the Empire. I loved the Chewbacca as Snoova figure from Hasbro's SOTE subset of figures and his absence seemed odd from the three Micro Machines packs released by Galoob. This is a really cool figure and has some amazing sculpting and detail. 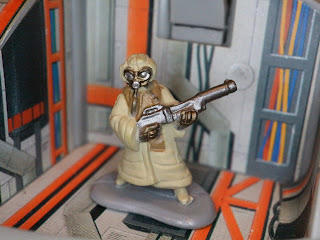 
* Last up is Zuckuss. The likeness might be a bit rougher here but the rest of the figure is just aces. I love how Galoob made him smaller than the other bounty hunters, which is accurate. He's a cool microfigure and mixes in well alongside his fellow hunters. 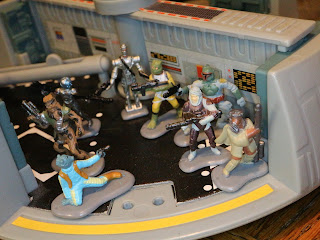 This is another Epic Micro Machines set. I've always loved the Star Wars Micro Machines line and while I'm glad that Hasbro did offer a number of really good vehicles in their Micro Machines revival, their microfigures and playsets were all inferior to Galoob's nearly 20 year old offerings. The Bounty Hunters figure set just captures so much of what I loved about Star Wars as a kid and each of these microfigures is a minute work of art. This is a really fun set that can be a bit pricey to acquire but, man, is it worth it.

If you also have a Boba Fettish than check a couple other Boba Fett toys on the site, including the Black Series Boba Fett, the Walgreen's exclusive Boba Fett (Prototype Armor), both the standard Hero Mashers Boba Fett and the Han Solo Vs. Boba Fett two-pack version, the Funko POP! #102 Boba Fett, and as a background character in the Bossk Micro Machines Mini Head and in the 4-LOM Mini Head.

If you're a Bossk aficionado then you may be interested in my reviews of the Black Series Bossk, the Hero Mashers Bossk, the Micro Machines Mini Heads Bossk, and Bossk's background appearance in the 4-LOM Mini Heads set.

Do you dig Dengar? If so check out my review of Dengar from Star Wars: The Black Series.

Do you break for IG-88? If so then check out my reviews of the Black Series IG-88 from Hasbro, the Funko POP! IG-88 #103, and IG-88's background appearance in the Micro Machines Bossk Mini Head.


If you can't help but be all about Zuckuss I've also reviewed the Black Series Zuckuss action figure.