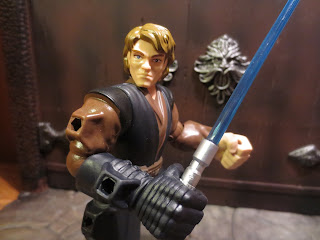 As of right now this is the last Star Wars Heroes Mashers figure I've picked up: Anakin Skywalker. While I've already reviewed the Episode II styled Anakin, I wanted to do a quick look at this figure as well because there are three differences between the figures. The biggest differences is the headsculpt as this is a Clone Wars/Revenge if the Sith styled Anakin. While the differences between the Boba Fett figures and the Darth Vaders are pretty minimal, this is a very different Anakin from the previous version. If you want an in-depth review of this figure, check out the Jedi Speeder & Anakin review. This is really just a quick glimpse at the differences in this figure. More after the break... 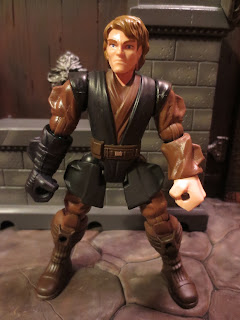 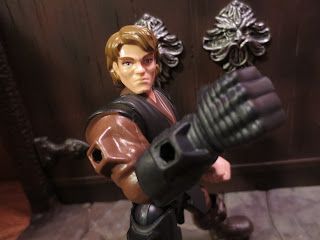 *The three differences are the headsculpt, the right glove, and the lightsaber. The headsculpt is great. I love the serious look here. This is definitely my favorite prequel version of Anakin. The right glove is cool, too. It's a bit Vader like and nicely reflects how Anakin loses his hand at the end of Attack of the Clones. While Anakin's lightsaber is similar to every other lightsaber in the line, it actually differs from the Episode II Anakin's (as it should). Unfortunately, I'm not sure it really looks like the classic Anakin saber that is gifted to Luke, but that's not a huge deal in a stylized line like this. 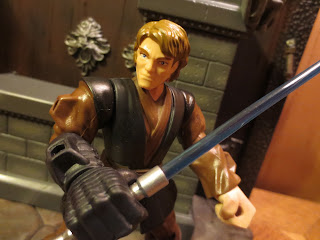 If you're collecting this line, you could probably live without the single carded Darth Vader (I am) or the deluxe Boba Fett. Anakin here is a different story, though. He's quite different from the other figure and really is needed to capture a different era in Anakin's growth. He's quite nice and I'd be comfortable giving him a Good and a 1/2 rating. His sculpt is good and he definitely looks rather pissed. Now let's hope Hasbro releases an Episode III Obi-Wan to go with him!

I've reviewed the Episode II Mashers Anakin
and the Black Series Darth Vader,
along with plenty of other Hero Mashers and Star Wars toys: