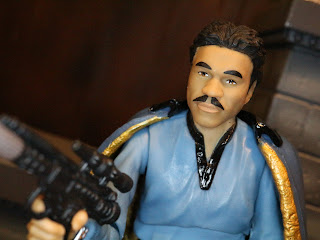 Star Wars: The Black Series has now been around for four years (the first release was the SDCC exclusive Boba Fett in July 2013) and it's seen a fairly impressive amount of releases. The release schedule has been pretty awkward at times, though, as Hasbro has chosen to adhere to the modern style of staggering the release of classic A-list characters while also integrating characters from the newer films. I still can't believe we're four years into this line and we have yet to receive a single Padme or Prequel Jedi other than Obi-Wan and the recent Qui-Gon Jinn. Padme Amidala and Lando Calrissian's absences have been the most notable so it's nice to finally have one of those checked off. Yes, we finally have Lando! While this isn't my favorite Lando look (that would be his snazzy General's outfit) this is definitely his most classic look and the one I'm sure the majority of folks wanted first. Let's take a closer look and see how Lando Calrissian fares in his first entry in the Black Series... 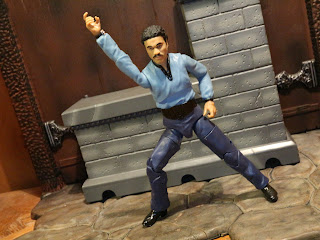 * Lando has some pretty good articulation. There are definitely some weaknesses (the elbow articulation is a bit limited) but overall Lando can attain most poses you'd hope from him. He's solid, durable, and is practically a one-man disco powerhouse. Yup, just like good ol' ToyFare magazine I still love putting Star Wars figures in disco poses. Because why not? 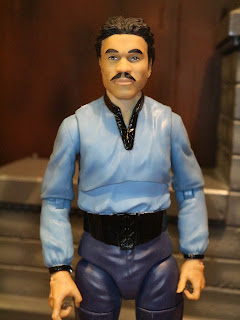 * Technically, there's nothing wrong with the work on Lando's outfit. Without the cape (which I'm going to get to in a minute) Lando's outfit is pretty standard. The paintwork is clean for such a simple design although the Baron Administrator state belt (the cummerbund like belt around his waist) does add a bit of sharp detail, to the look. 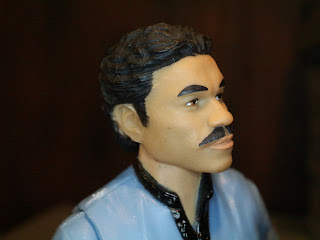 * Let's take a look at the Lando headsculpt. Hasbro has definitely struggled with straight up human likenesses in the past and it's probably made more noticeable considering there are few actors whose likenesses have been seen in action figure and collectible form than the Star Wars crew. There is definitely a lot to like about this portrait as the eyes are pretty piercing, the paintwork clean and neat, and the overall appearance recognizable. It's not dead on, but there's some good work here. 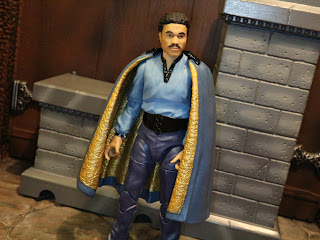 * Again, I'm conflicted on this figure and I'll point out another element that I have both praise for and problems with: Lando's cape. As the Baron Administrator of Cloud City, Lando can wear this cape and no one is going to say jack to him. Granted, he could probably wear it anyways. It's a plastic cape and it not only looks good on the figure but it also has a really unique textured pattern inside. While I would have favored an actual soft goods cape, this doesn't look bad at all. 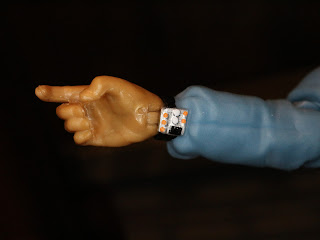 * Poking out of his right sleeve is Lando's wrist communicator. It's a really, really tiny little piece of tech but the paintwork is pretty solid. I love small details like this that show some attention to detail. Now please, please, please Hasbro! Please give us a Lobot! 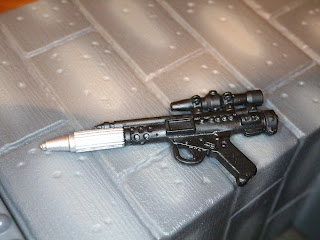 * Lando includes the DH-17 blaster pistol he's sporting in so many publicity stills. It's a great blaster with a clean paint application on the barrel. It's nice to finally have one of these in the Black Series (although the Death Squad Commander from the 40th Anniversary Series has one, too, but I found him after I found Lando). 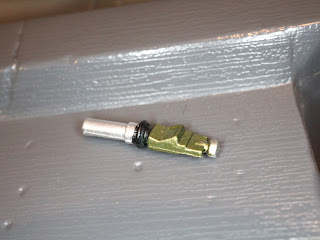 * Lando comes with one other cool accessory: His little portable comlink. This thing is pretty accurate, even though it's really, really small. It makes for some great poses. Heck, now Hasbro just needs to make a Lobot to go along with this Lando. I really, really want a Black Series Lobot! 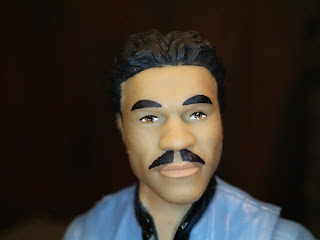 * Let's talk about the headsculpt again. From the front there's just something off about it. I absolutely see some Billy Dee Williams in it but you know who else I'm seeing? Lionel Richie. I'm not sure if it's the shape of the face, the hair, the skin tone, or the lack of Lando's trademark grin, but there's something about this headsculpt that just misses the mark a bit. I really think a grinning headsculpt should have been included. 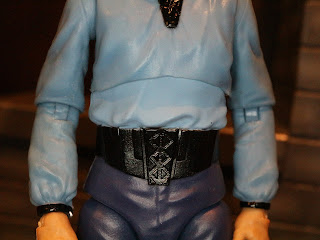 * I know that articulation is sometimes going to ruin sculpt, but why oh why did Hasbro not try to add mid-torso articulation point where Lando's shirt meets his belt? That would have just made too much sense and really wouldn't have cost too much so far as range of motion goes, right 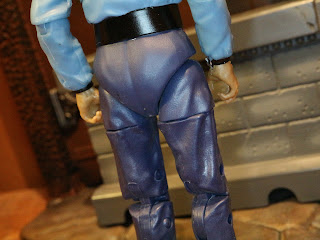 * I know it's tough to see in this picture, but Lando's waist and upper thighs are are very different shade of blue than his pants. It's noticeable, probably more noticeable because Lando's wearing a pretty simple outfit. Weird, huh? 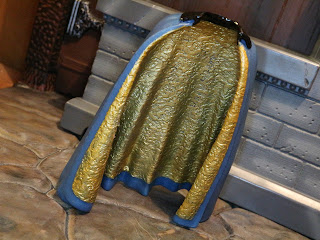 * So... Hasbro decided to go with a hard plastic cape. As I mentioned above, it does look pretty nice. Hasbro really nailed the unique pattern inside the cape. Still, it only looks natural in one pose. I would have loved to have been able to have some more diverse posing options for Lando Calrissian and I think the lack of a soft goods cape hurts the figure overall. 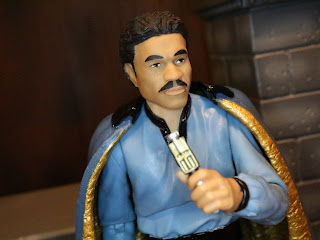 There are some really cool aspects of this figure, but there's almost an equal number of aspects of the figure that seem like they could have just been done better. Maybe I'm being too harsh here, but I consider Lando Calrissian one of the Star Wars A-listers and considering Hasbro has been doing this for years, I would have loved for Lando to have been a slam dunk. He's a Good figure, but he really deserved greatness. Hopefully Hasbro will do a better job with Skiff Guard Lando and General Lando. Oh, and on Lobot. Because that guy deserves a figure, too.

I haven't actually reviewed any other Lando Calrissian figures on the site before. If you're looking for more Black Series: Phase III figures, though, check out the following: