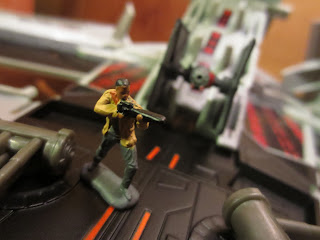 Today I'm looking at another playset from Hasbro's Star Wars: Micro Machines revival: The First Order Star Destroyer Playset. Based on the Finalizer, a Resurgent-Class Star Destroyer which was introduced in The Force Awakens under the command of General Hux, this playset is definitely the largest of the four released so far under Hasbro's watch. While looking at it might remind you of the older Micro Machines playsets such as the transforming "Double Takes" Death Star, let me go ahead and manage some expectations right now: This is a pretty weak toy overall. I don't usually reveal my hand this early but I'll admit that this is one of the most disappointing toys I have purchased in quite sometime. I think something like this perfectly summarizes much of what was wrong with the majority of Hasbro's The Force Awakens products. Take a closer look at what I mean after the break... 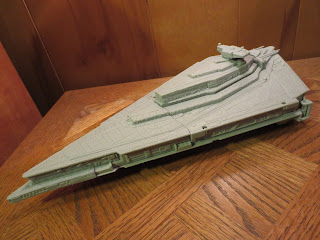 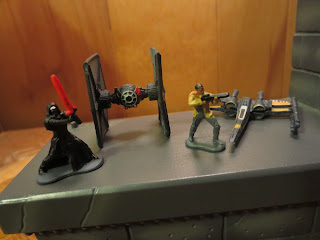 The Figures, from left to right: 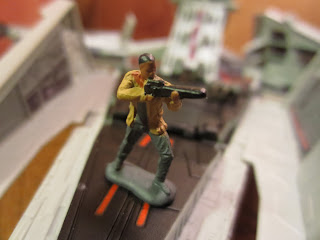 * Finn has a pretty good paint job for a figure around 1 inch tall. He also has a great action oriented pose, something I remember appreciating as a tyke. It's odd that we got Finn in this outfit with this set, however, as the only time we see Finn aboard the Finalizer he is wearing his Stormtrooper outfit. I guess Hasbro really wanted to get Finn's main look out there and this figure turned out pretty nice. 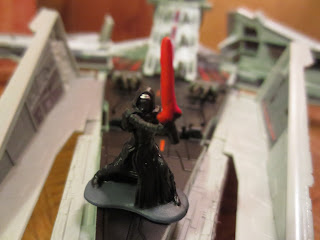 * Kylo Ren is basically clad in black robes which seems like it'd be tough to give much definition to on such a small figure. Hasbro did a nice job here however, as there are plenty of excellent small details. His lightsaber might look a tad oversized but it gets the point across. It's just really cool adding this guy to the Micro Machines universe. 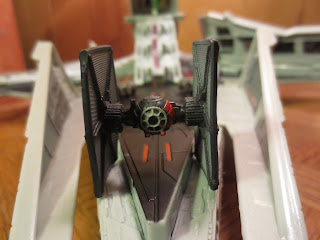 * This is called the battle damaged version of the First Order Special Forces TIE Fighter, but the only thing that differentiates it from the standard versions is that the wings are darker with sort of a "charred" paint spray to them. The model itself is pretty good though, if a bit rubbery. Still, that's probably a nice trade off considering that the TIE Fighter's from the Galoob Micro Machines line tended to be pretty brittle. I have many broken ones to attest to that fact. The paint is awesome here, especially the red details on the body. 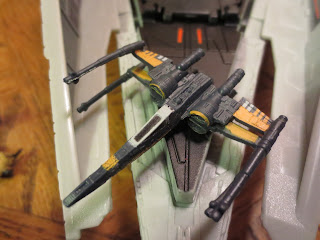 * I love the look of Poe's specialized T-70 X-Wing fighter, Black One. It's almost exactly the same size as the original Galoob X-wings but it comes with some pretty incredible paint details. The orange and black just looks sharp as a tack here. I'm also digging the way the wings are designed on these new ships. 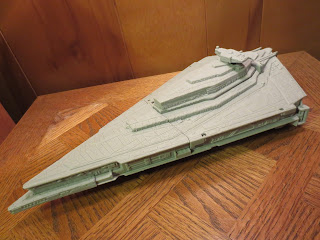 * Before you convert it into a playset, this set really does just look like a large Resurgent-Class Star Destroyer. While the opening panels are clearly visible and there isn't much paint work, it's a nice sculpt. Just a but plain. 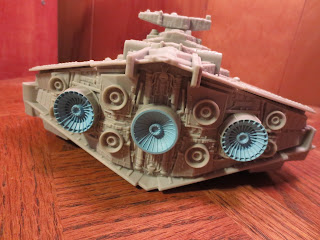 * The engines look really cool, though. The detail is pretty nice here and there's even a few paint apps to give it a little pizazz. 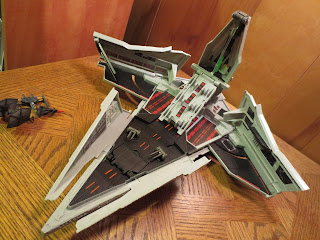 * When the Star Destroyer opens up it actually turns out to be a pretty large playset with lots of room for minifigures and ships. Unfortunately, it's a really awkward playset to open. The idea is you pull the bridge portion back and the rear two side panels pull out while the front two side panels unfold. It's really messy, though, and not at all smooth. The side panels and bridge tower are connected and don't fully open manually which tends to not work well for something this size. 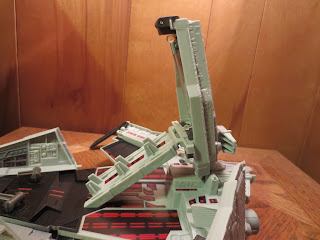 * The tower is kind of the focus of the set but it leans forward and tends to fall down, causing the entire set to close. Not only does the tower not pull back far enough but it doesn't have anything that keeps it in place. The rack for the TIE Fighters folds down and rests on the deck but it doesn't plug in or rest against anything. If it did it would give the set some better stability. 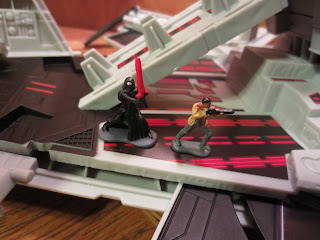 * Another huge problem with this set is that it only comes with....two figures. Two 1-inch figures in a $40 dollars set. That's ridiculous. This is the flagship set in this line and it should have come with a handful of cool, probably exclusive figures. Unfortunately, Hasbro really dropped the ball. Imagine how cool this set would have been had it also came with Rey, General Hux, a group of troopers, and a Supreme Leader Snoke hologram? 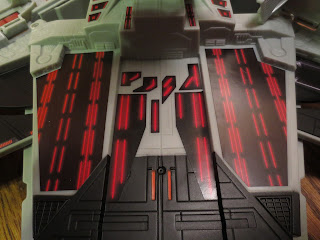 * While there is a good deal of sculpted detail in this set there is very little actual paintwork. Most of the color comes from stickers. Now I don't have a problem with stickers but some of these stickers are problematic as they're placed over uneven surfaces and often don't have clear directions in how to place them. I have no idea how  was supposed to put the stickers on the deck. It looks OK but I don't think I did it right. 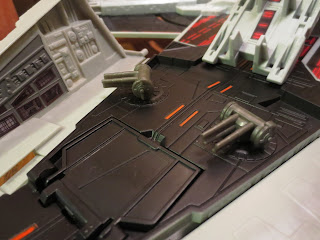 * Hey, two guns! They can't be bad can they? Yup. They don't move vertically and there's no way to pose them doing anything but shooting at the walls. That's just lame. 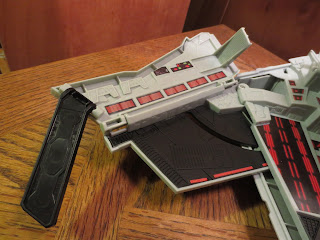 * The left side is supposed to be a deck of some kind with a loading ramp. That black strip is a ramp of some kind, but it doesn't really touch the ground. Heck, this side hardly functions in folding out flat. It's just busy space with no interesting features. Of course, that tends to be the trend with these Hasbro Micro Machines sets: There's hardly any unique play features that actually relate to the film. 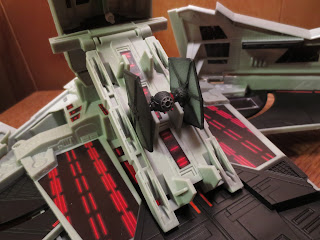 * The coolest thing about this set is the unique TIE Fighter hangar that folds down from the tower in the middle of the set. It has slots to hold three separate TIE Fighters on vertical racks, just like in the film. The ships do stay in place nicely and look great on display. 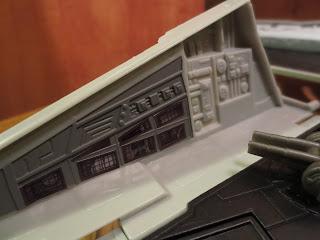 * Some of the little details here are cool, such as these panels on the side. They look pretty good and add some much needed personality to the set. 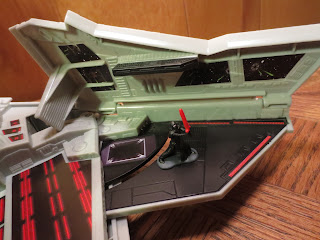 * The right side folds out but, again, there's no features here. Just some space. I do like the stickers on the windows that depict a space battle occurring outside as well as the sticker representing a pit of some sort in the Star Destroyer hangar. Brought a turbo-lift shaft. 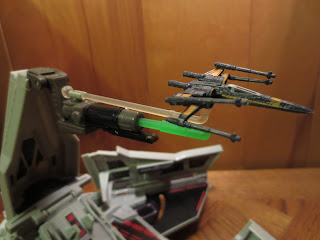 * The biggest feature of this set is a fold out cannot that fires a green missile and has a clip on top. The clip holds a translucent flight stick that can attach to any vehicle in the series. The idea is that the attached ship is fighting against the Star Destroyer's defenses. The flight stick is pretty cool and something I recall fondly from the old Galoob Micro Machines line. 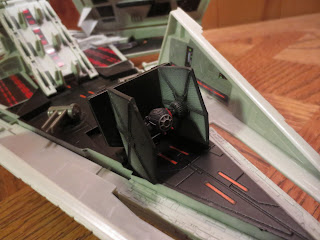 * There's an opening panel on the end of the Star Destroyer that flips up. The general idea is that you stand it up and place the Tie Fighter in front of it, giving the missile launcher a larger, flat target to fire at. 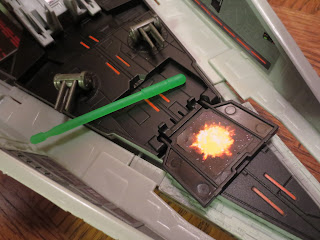 * Fire the missile and it knocks over the panel which knocks into the TIE Fighter and flips the panel down with a picture of an explosion. That's it. I gotta admit, as someone who is still impressed by the play features of the original Micro Machines line, I think this is a pretty lame feature. It just seems rather pointless to me. 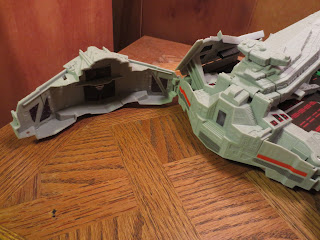 * I do like this secret area in the back of the Star Destroyer. It folds out manually and has some cool places for the figures to stand around. It's not fancy but the fact that I didn't realize that this was present for about six days after I received this toy means it is fairly well hidden. 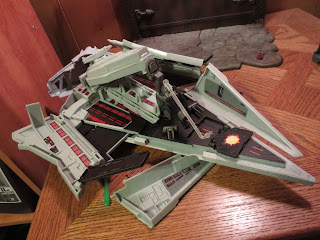 * Here's my biggest issue with this set: Despite the limited number of figures, lack of play features, and poorly thought out sticker placements, the set just doesn't open, close, or stay in play mode well at all. It tends to fall apart or close up whenever you look at it. It's just not well designed and, to be honest, had I pad more than $15 for this I'd have returned it in a heartbeat. 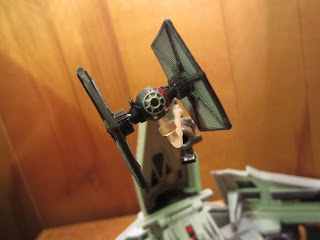 While the ships and two minis are good, the set itself is just Crap. I mean, this is without a doubt the worst designed Micro Machines (or Mighty Max) micro playset I've ever owned. It's boring and poorly designed. If Hasbro hopes to keep the Micro Machines line going they're going to have to do better with their larger sets or just reduce the line to small sets. Playing with these sets, you get the idea that Hasbro really didn't know much about the movie when creating these and thus they feel really generic. Avoid this set! It's not worth your time as these minis are available in other places. Overall, this is a Crap and a 1/2 set.

I haven't reviewed any other Star Wars Micro Machines yet but I have reviewed figures of the characters in this set including the First Order Special Forces TIE Fighter, Finn (FN-2187), Finn (Jakku), Kylo Ren, and Kylo Ren (Starkiller Base).