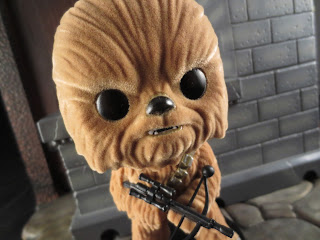 If you don't love Chewbacca, you just don't have a soul. I'm not sure that I can state it any simpler than that. Chewbacca is just incredible. He's like all of the best people you know rolled into one. Your loyal dog? Chewbacca. Your best friend who is always faithful to you? Chewbacca. That person you know with an incredible work ethic who never gives up? Chewbacca. The person who acts tough but who really has a heart of gold? That's Chewie, man! I love the guy and, it turns out, my little one loves him two. Ever since I bought my little one a stuffed Chewbacca for Christmas of 2014 she has been in love with this big furry oaf. This Chewbacca POP! by Funko is part of the Smuggler's Bounty subscription box that ships every two months and when I received and opened my box last week, my little one immediately wanted him to sit up on a shelf in the living room next to our other POP!. This flocked version of Chewbacca is exclusive to the January crate which has a Resistance theme. Ready for a closer look at Chewie? Then join me after the break... 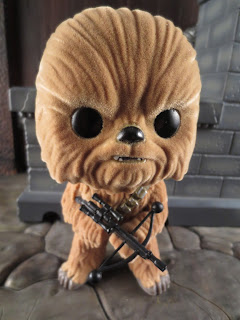 Non-Scalper Price: Chewie is part of the $25 Smuggler's Bounty crate, which also included a Resistance themed T-shirt, a BB-8 patch, a Resistance pilot pin, and a C-3PO mug. 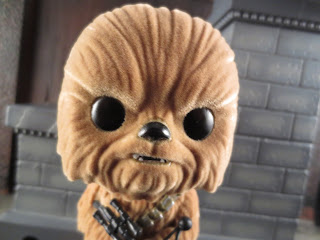 * I have to admit that this little, flocked Chewbacca POP! is about the cutest toy I've ever seen. Seriously, he's adorable. I love the little growl on his face with a row of sharp little teeth. Chewbacca works so well with the POP! aesthetic and the flocking is really well done. I'm digging it. 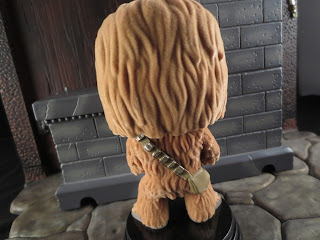 * I like how the POP! figures always have unique sculpts and Chewie's looks excellent. His fur looks awesome and I just want to give Chewbacca a big hug. 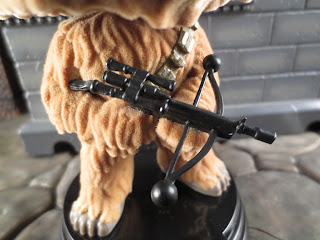 * Chewie's bowcaster looks nice. I mean, this is a pretty detailed weapon to be wielded by a pop. I really like it and Chewie looks like he loves it, too! 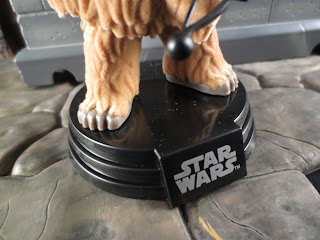 * Chewbacca comes with a stand like the other Star Wars POP! figures. Again, I love the look of this and also appreciate the fact that it is removable in case you really want uniformity in across your POP! collection. My guess is that Funko includes these to help keep these standing since they're bobble-heads, which probably gets them around licensing agreements with Hasbro and other companies making "action figures." 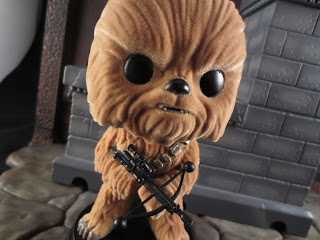 Between my wife and I we own about 15 POP! figures, and I'm going to say that I think Chewbacca is pretty much the best POP! I've seen. He just looks perfect. I mean, this is absolutely, definitively Chewbacca. The flocking really worked here and gives this guy an adorable, textured appearance. While I'm still on the fence about continuing with Smuggler's Bounty, I have to say that this figure is an Epic POP! and an essential addition to the collection of any Chewbacca fan. I love it!

Chewbacca was one of my first vintage Star Wars figures! While I have many Chewbacca figures, I've only reviewed a couple on this site including the first release Black Series Chewbacca and the Hero Mashers Chewbacca.