Toy Review: Pennywise from It: The Movie by FOCO 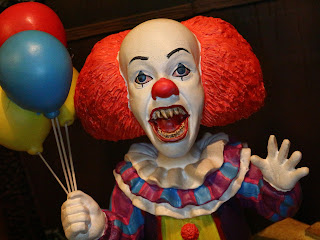 Man, Stephen King's It has had quite the renaissance over the past couple of years, huh?  The 2017 film was obviously a huge hit (with the second film scheduled for this September) but the book and the 1990 television film have also received a lot of attention. Tim Curry did a fantastic job as Pennywise in the 1990 film but I'm still surprised by how popular the film apparently is with folks. 2018 was a huge year for Pennywise merchandise based on both the Bill Skarsgard and Tim Curry depictions of the character and FOCO released their own take on Curry's depiction of the evil clown. This Pennywise bobblehead was part of the box of cool stuff FOCO sent me last month and I definitely want to show this one off. Float on down below and check out my thoughts after the break... 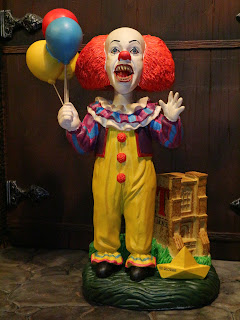 Height: 8 3/4ths inches from the base to the top of the balloons. 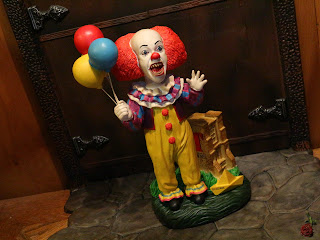 * Like with FOCO's Batman: The Dark Knight Returns bobblehead, Pennywise showcases some really nice design that creates a more diorama like piece. Rather than just a standalone figure, Pennywise stands on a base, looming larger than life over the entrance to the Derry sewer system and a small flow of water carrying the S.S. Georgie on its ill fated voyage. 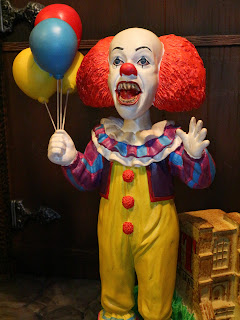 * FOCO did a very solid job of capturing Pennywise's appearance and costume! Unlike many other horror icons, Pennywise wears very bright, very garish colors, so he's definitely going to stand out on your shelf. The sculpt and paint work are very eye catching, melding something bright and cheerful with something menacing and disturbing. 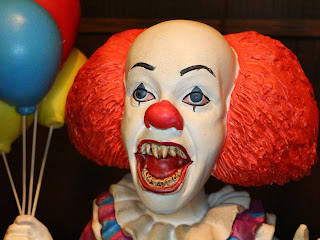 * I like the headsculpt. It looks quite accurate while also having a bit of caricature to it, befitting it's bobbleheaded nature. The head, of course, appropriately bobbles as needed. The teeth and the eyes are quite well done and definitely evoke Curry's Pennywise making that weird face he sometimes made before getting ready to eat someone. 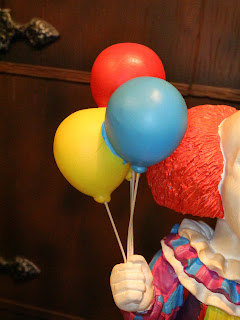 * Balloons just go perfectly with Pennywise the Dancing Clown, so FOCO gave the bobblehead a set of balloons. They're held in place with stronger metal wires and provide yet another interesting visual feature for the piece. They also give Pennywise something to interact with, too, which just helps the pose to feel more natural. 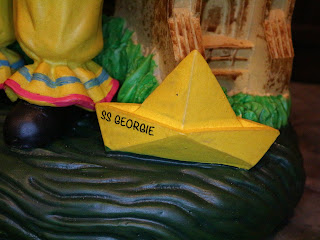 * The presence of the S.S. Georgie is very appropriate, as it seems somehow responsible for all of the events that unfold in It. It's simple, but effective. 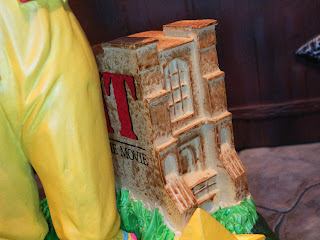 * I really love the presence of the ominous sewer building on the bobblehead's base. It looks great and it was a great choice for the base due to how significant of a part the location plays in the film. It has "It: The Movie" across the side, which I like, although the text is obscured by Pennywise's legs. 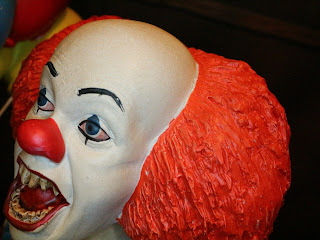 
* Overall Pennywise's face paint is pretty good, but the line of separation between the hair and the white makeup is kind of messy, which is unfortunate as this is definitely one of the major areas your eyes are drawn to. 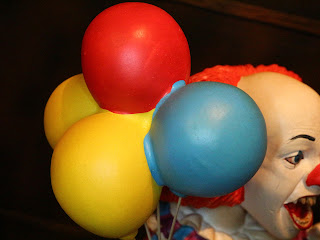 * I love the presence of the balloons but, man, the paintwork on them is messy. The colors kind of blend together here with lots of slop. I get that they're all one sculpted piece, but maybe some black highlighting to define each balloon would have helped things to appear a bit neater. 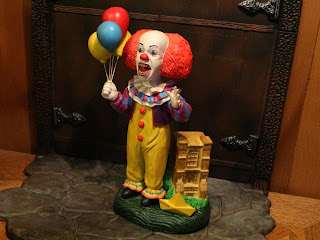 FOCO's Pennywise is another really solid bobblehead. I'm definitely not a bobblehead connoisseur by any stretch of the imagination, but I definitely can see there is a lot to like here. Pennywise has a lot of interesting elements surrounding him that makes him infinitely more interesting than if he were just a simple standing figure. The composition of the piece is definitely one of the strongest elements. The weakest is the paintwork, however, as it suffers on the hairline and on the balloons. If FOCO can tighten up their paint applications, I think they could attract even more attention in the future as creators of pretty cool licensed bobbleheads and statues. This is a Good and a 1/2 collectible and should definitely satisfy fans of the character who demand something colorful and disturbing for their displays.


The subject of this review was provided to me free of charge by FOCO.
Posted by Barbecue17 at 1/10/2019