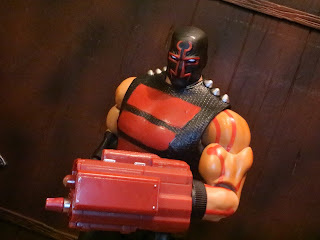 Over the last month or so the last series of Mattel's DC Comics Multiverse figures have been hitting stores. It's a Batman focused series featuring multiple characters that fans have been asking for since...well, since at least the DC Universe Classics years. It's nice to have these figures as Mattel's work on the DC license has been declining over the past few years and it will largely end at the end of 2019, when the main action figure license is turned over to McFarlane Toys and the general boys products will go to Spin Master (Mattel apparently still has the rights for toddler toys, like Imaginext, and girls products, like DC Super Hero girls). Mattel has been releasing 6 inch scaled DC figures since 2003, when they took the license over from Hasbro, and overall I've been pleased. The last few years have been rough, though, and it seems like most license holders for the DC brand can never get things right. Heck, even DC Collectibles themselves hasn't ever been consistent. Mattel has a stellar run during the DC Superheroes and DC Universe Classics years, really rounding out some key corners of the DC Universe. Today I'm checking out the first figure from this newest, and last series, which features one of the few most significant Batman villains to have never had an action figure: KGBeast. While KGBeast first appeared back in 1988, this version of the character is from DC Rebirth and actually just goes by The Beast. He's a pretty cool Batman villain who's still relevant in the comics, so it's nice to see Mattel offer him up as part of the send-off series. Let's check out Anatoli Knyazev, AKA KGBeast, AKA The Beast, after the break... 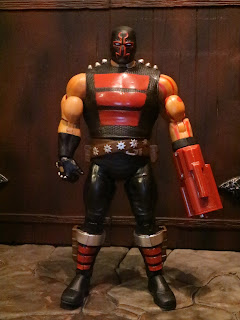 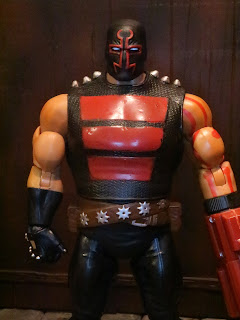 * KGBeast is wearing his Rebirth era outfit and overall it looks pretty good. He's not as massive as Bane but he's definitely built. His shirt is a softer plastic piece that sits over a standard torso (I believe it might be from the Lobo Collect & Connect figure from earlier this year) and features various studs on top. His belt also is covered in shuriken, just in case the need for one ever arises. 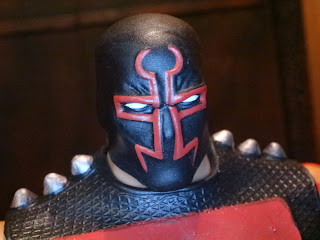 * The head is a tight fitting mask, kind of like a Luchadore's mask, which I guess is also similar to Bane. I like how you can see his furrowed brow beneath the material (he looks pissed!) and his white eyes also make KGBeast seem like one angry dude. 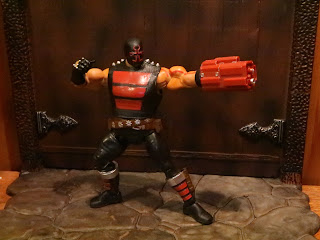 * With the exception of the swivel/hinge joint on his right wrist, KGBeast's articulation isn't much different from the articulation on a DC Superheroes figure from about 14 years ago. He's still plenty poseable, though, and he moves quite nicely. He has a different feel to him than most other DC Comics Multiverse figures which I believe is because he's based on a Collect & Connect body. Those tend to be designed a bit differently. 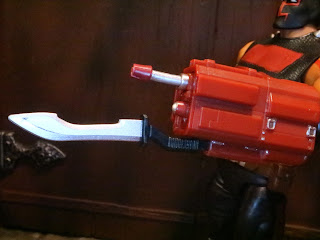 * KG Beast is packed with a wild gun arm. This thing is massive and is very faithful to the Beast's Rebirth design. There is a small gun barrel that comes packaged separately and attaches into the weapon along with a massive bayonet that slides underneath the weapon. I love the design here. It's big, boxy, and looks pretty wicked overall. 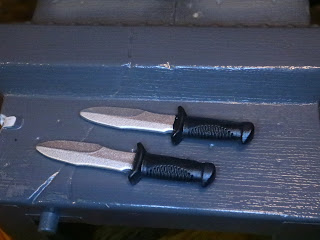 * For getting up close and personal, the KGBeast comes with two additional knives. They have nice sculpts with grooved handles and Beast can hold one in his right hand for real stabbing action! 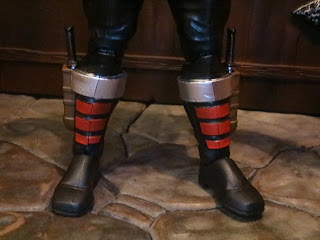 * What does he do with the knives when they're not in use? He stores them away in these nifty little sheathes on his boots, of course! Yup! Boot sheaths! This is a really cool feature. Mattel doesn't often give us places like this to store weapons so this is a very welcome treat. 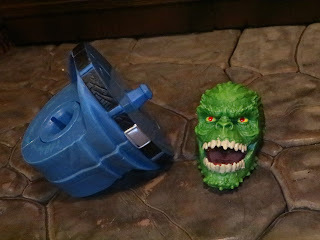 * The six figures in this series (KGBeast, Katana, Alfred Pennyworth, Jason Todd/ Red Hood, Dick Grayson/ Batman, and Tim Drake/ Robin each come with a piece of the Killer Croc build a figure Collect & Connect figure. KGBeast comes with the head and waist. I'll review Croc once I build him but, thus far, he looks like he's going to be a very, very figure. 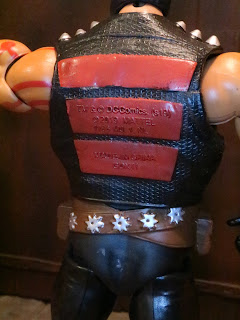 * The paintwork on the red stripes on both the front and back of KGBeast, and on his throwing stars, is a little rough. I've seen him at stores a few times and every figure I've seen has had the same problems. 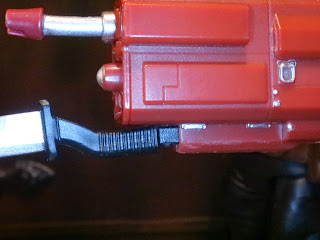 * The knife/ bayonet attaching to the gun is very, very cool, but it doesn't fit that well. I'll probably have to trim the bayonet a bit to get a better fit. As it stands, it looks a little wonky. 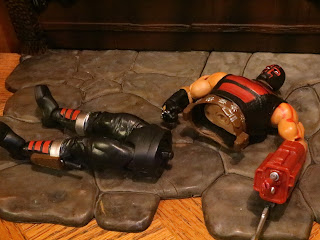 * I mentioned above that KGBeast is built more like a Collect and Connect figure, and one way I can tell this is that he tends to split apart at the waist. It won't happen randomly but, if you're trying to pose him using his mid-torso hinge, he'll probably split apart. 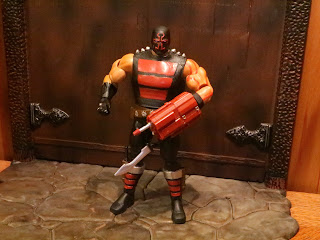 I've always had high hopes that Mattel's DC Comics Multiverse would eventually rise up to the character diversity and quality of DC Universe Classics and would eventually reach the same level of quality as Hasbro's Marvel Legends. That never quite happened, although the last year or so have given us glimpses of what might have looked like if Mattel had played their cards right. KGBeast is a Good and a 1/2 figure. I like him, but he definitely has his flaws that seems to come from frustrating smaller issues rather than an overall design. It's great to have another Batman villain that no one has ever tackled before, though. That's always a welcome addition to the collection.