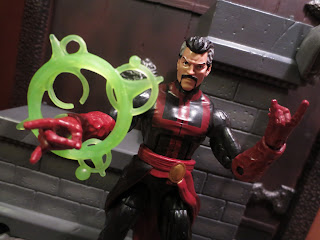 While everyone's looking forward to November's Doctor Strange film starring Benedict Cumberbatch, I took a minute to look back at last year's Marvel Legends Infinite Series Doctor Strange action figure. Based on his appearance in the Marvel Now! comics label Dr. Stephen Strange is rocking his cool new outfit that seems a bit more practical for running around and battling evil. Then again, if part of the job is just looking cool and projecting confidence, the old outfit was probably a big help. Anyways, I really wanted to pick this figure up and I managed to find a good online sale on him for just the figure without his build-a-figure piece. Doctor Strange was released as part of the 2015 Hulkbuster series and was originally packaged with one of the Hulkbuster's legs. For less than half the price of retail, I got this guy without the leg that I wasn't going to use. That's a deal, right? Let's jump in and talk about this cool Vincent Price inspired Sorcerer Supreme after the break... 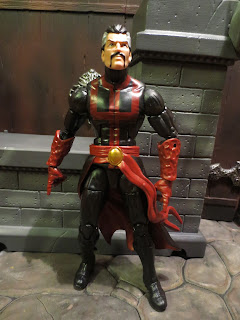 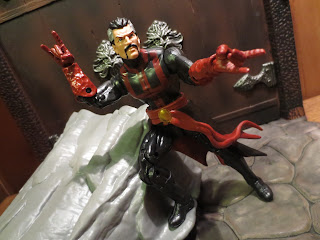 * It's pretty cool to have a magical wielding action figure who can move so freely! Doctor Strange has lots of great articulation (double hinged elbows and knees) that, coupled with his cool flowing skirt and awesomely posed hands, makes him look like he's rocking out and casting spells on the bad guys. 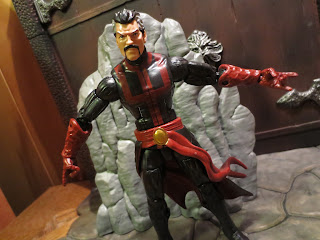 * Again, while I'm a fan of the classic costume for Doctor Strange I like this update, too. It's very sleek and simple and Hasbro really nailed it on this figure. The body seems like a pretty standard thin male body from Marvel Legends (don't ask me who it's from) but the paintwork is clean, the gauntlets are detailed, and the blowing skirt is just a nice touch. 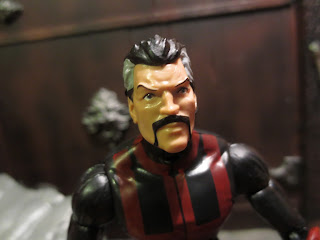 * The headsculpt is also based on the Marvel Now! appearance and it looks pretty accurate. It's not insanely different from the more classic depictions of the character although the resemblance to Vincent Price is less pronounced. 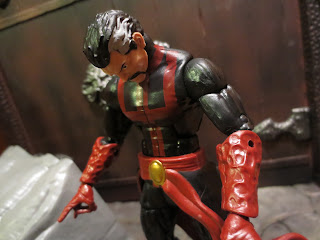 * Umm...Doc? Did you drop the Eye of Agamotto or something? I ask because it seems like you just keep staring at the ground. Yeah, Doctor Strange is  often looking down as it seems his neck hinge is really, really loose. Not sure what is causing that but it's really annoying! If you position his hands up in the air and shake the figure, it does look like he's headbanging, though. That's...kind of cool, right? * Doctor Strange comes with two magical energy effects molded in a translucent plastic. These same effects first came with Scarlet Witch and they worked much better with her. I'm really having trouble getting these to fit on Doctor Strange's wrists or arms. One hand clasp seems to small while the other seems to large. Plus, the clasps feel kind of fragile. Good idea but the execution is lacking. 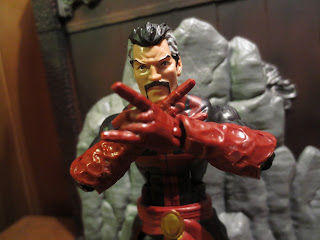 I like Doctor Strange quite a bit but this definitely isn't the most exciting Marvel Legends figure. It's by no means bad either, but it's a shame that mine has a loose head. I'd actually be more willing to overlook the unwieldy magical effects (although an artifact or magical object of some kind would have been cool) but the loose head is a bit strange. If you're building the Hulkbuster I'm sure this guy is a necessary purchase but, for anyone else, it's going to depend on how much you like this costume. I'm a fan and I think this is a Good and a 1/2 figure, although I'm still excited to see what all comes out next year ahead of the movie. How much will Marvel be able to merchandise Doctor Strange? I'm waiting to find out!

I do believe this is the first action figure of Dr. Stephen Vincent Strange I've ever owned so I certainly haven't reviewed any others in the past. I have reviewed some other Marvel Legends figures from Hasbro, though: