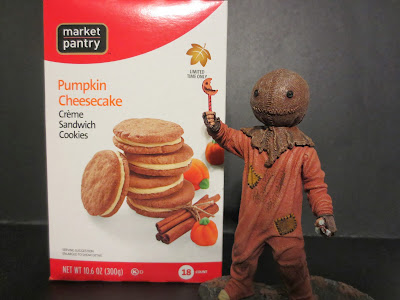 These aren't overly terrifying, but they're pretty tasty and appropriately festive so on my last trip to Target to by Fruit Brute and spooky Jones Soda I picked these up. Two nights ago most of The Epic Review crew got together for a Halloween party. Not a Halloween party, like the holiday, but a Halloween party, as in we watched the 35th Anniversary edition of Halloween on Blu-ray. Amongst the delicious foods we partook in were Jones Red Licorice Soda, some delicious snacks made by Brad's mom, and these little Pumpkin Cheesecake sandwich cookies (these were my contribution). How'd they taste? We'll get there. First, let's look at the box! Nothing too special, just one simple fall leaf proclaiming these as "limited time only" and a picture of the cookies. I love how these are displayed with candy pumpkins and cinnamon sticks! Other than that fun little element, the box is actually dull. Really dull. Things get more exciting after the break, though... 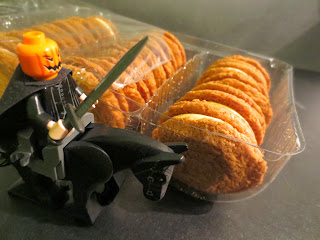 These things come in a clear tray like Oreos and come 18 to a box. They're evenly distributed in their little rows and have a nice autumnal orange color to them. They're very visually appealing and with a little finesse could probably be used for numerous purposes in various Halloween deserts. 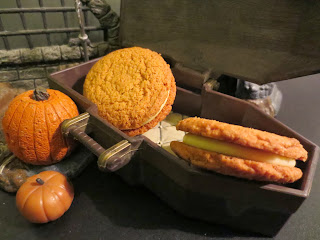 They're really crispy. I was imagining that they would be softer, more like an Oreo Cakester, but these are more like gingersnaps with a pumpkin flavor to them. I like gingersnaps, so I was pleased with them. The cookies have a really strong flavor to them so they kind of overpower the pumpkin cheesecake. The cheesecake filling is nice, although it really just tastes like pumpkin cream. 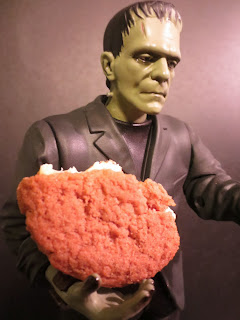 These are pretty good. If you really like pumpkin and savory cookies like gingersnaps, you'll probably enjoy these. I sort of wish there was more cream in the middle and that the cookies were a little softer but those are minor complaints. On a scale of the Mole People to the zombies from Dawn of the Dead, I'd rate these as a solid Frankenstein's Monster. Yup.
Posted by Barbecue17 at 9/12/2018