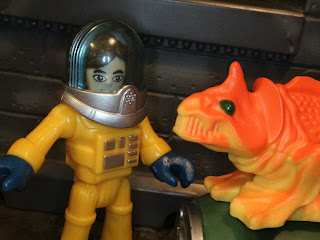 Back in early April I found 5 of the 6 figures from the 10th series of Imaginext Collectible Figures at a Walmart for $1 each. I reviewed all of those months ago but I never did find the lone figure I was lacking from the set... until now! Today I'm checking out the last figure from Series 10: The Astronaut Boy w/ Alien Pet. Guess what? This is another figure that was inspired by Fisher-Price's Adventure People toyline. I really didn't know that much about the line prior to researching it a bit for the Series 11 X-Ray Alien but it was during that research that I realized the Astronaut Boy is based on the early 1980s Alpha Star Astronaut. The space suit, colors, and the Alien Pet from this Imaginext figure are dead ringers for that vintage toy. Cool stuff! Let's take a quick peak at this kid and his alien pal after the break... 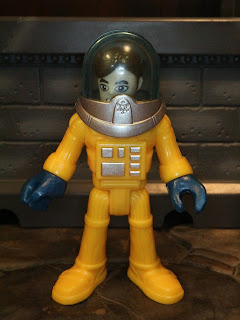 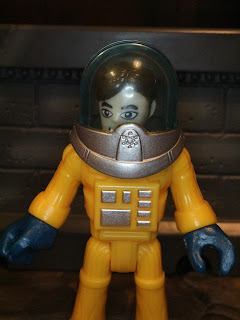 * The Astronaut Boy definitely has a very retro inspired spacesuit, which I really dig. The orange color with silver accents makes for a pretty slick looking figure. The suit also has a nice amount of detailing on it to give it the look of a very heavy material. 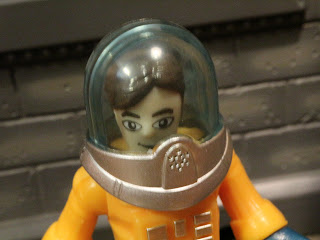 * The Astronaut Boy peeks out at us from beneath a domed space helmet. The helmet is tinted slightly blue and has a cool atomic logo on the front. 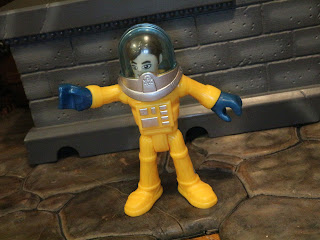 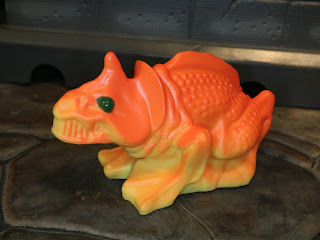 * Very similar to the alien included with the vintage Alpha Star Astronaut Adventure People figure, the Astronaut Boy's Alien Pet is a fairly large creature that looks like a blend between a frog, a lizard, and maybe a rhinoceros. It's painted the same orange and yellow as the vintage and has the same green eyes. While the original one was squishy, like a rubber duck, this one is solid plastic (well, the bottom is hollow). 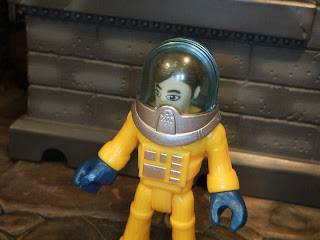 * I really wish the helmet were removable. It would have made for a cool play feature and allowed for the Astronaut Boy's head to turn. Alas, the accessories and extras have been cut down over the past few series. 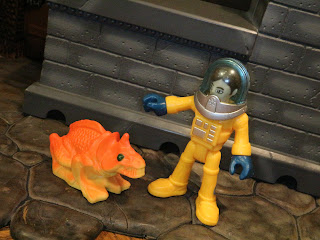 The Astronaut Boy is another Good and a 1/2 Imaginext release. I really like him, especially the Alien Pet. He would have been improved had he come with some sort of accessory or featured a removable helmet but, as it is, he is still a pretty cool little figure. If you're nostalgic for the Adventure People toyline then you'll probably like him even more. Fisher-Price keeps putting out cool toys in this line and this is another solid release. He's not my favorite series 10 figure (that would be the Elf Warrior) but he is no slouch, either.