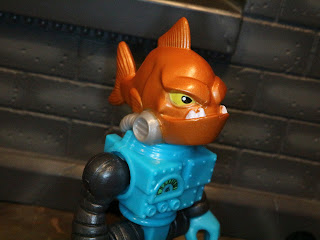 It's time for a look at the third figure in the 11th series of Imaginext Collectible Figures and this one is definitely a strange one! Today we're checking out the Fish Robot, a figure that seems to be a goldfish of some sort (possibly evil) on top of a robot body. Imaginext offers some some pretty strangely awesome figures in the Imaginext Collectibles Figures series and the Fish Robot is definitely closer to the far end of the weird spectrum. Looking at this guy, I was reminded of two fish on top of some sort of robot bodies from my childhood: Bob the Killer Goldfish from Earthworm Jim and the motorcycle riding daredevil Fish from the Sweet Pickles series. I don't know where the exact inspiration for this crazy guy came from but I do like him. Oddly enough, though, he doesn't include any accessories. That's weird, right? He is the first figure in the series to not come with anything (the Muscle Men also don't have any accessories although you do get two of them in the pack). This is kind of an odd decision as I can think of a few cool extras that would have worked with the figure. Let's dive in and give the Fish Robot some attention after the break... 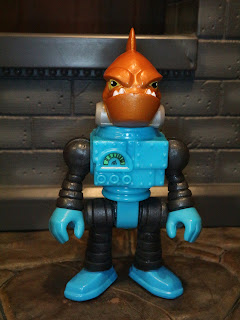 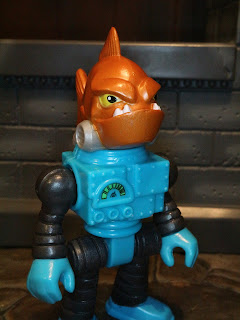 * You gotta give it to Fisher-Price: They have some crazy, crazy designs for this line. The Fish Robot just looks really out there and has a very cool, funky vibe. Part robot, part evil fish; you're not going to go wrong here. I like the boxy body with the various dials and the gauge on the front. The color scheme is also pretty appealing. 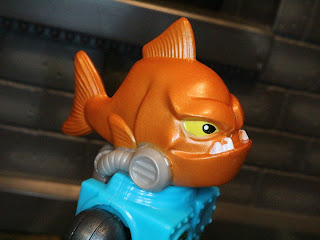 * The fish (who clearly appears to be very, very evil) looks great. I love the sculpt on this guy. The eyes and sharp teeth add so much character to the fish and really bring him to life. I also like the connections that seem to come out of the fish's body and into the tank on the robotic suit. 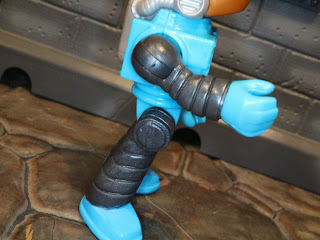 * The limbs are slim and look like they're made of some sort of tubes. They're very fitting for a robot body and they add just a bit more character to the figure. 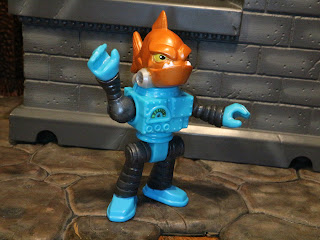 * The Fish Robot is quite tall (over 3 inches) and moves about as much as any other Imaginext figure with the exception of the missing swivel neck joint. The Fish Robot is a fun, colorful, durable action figure that definitely can stand up to some play. 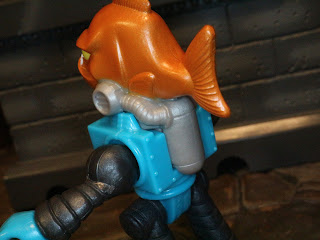 * So.. yeah, the Fish Robot doesn't include any accessories. That's kind of a downer as he is the first figure in the series to not include any extras. Looking at the makeup of the figure, it seems like it would have been really easy to have made the fish attached to his breathing equipment a removable piece. Not doing that seems like a missed opportunity to add a cool feature to this guy. 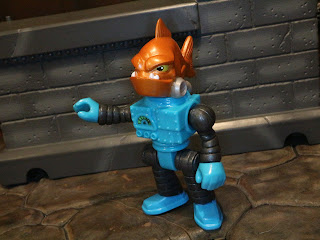 While he's not a direct homage like some of the other figures in series 11 nor does he have any cool extra accessories, the Fish Robot is still a really solid figure. He's a Good and a 1/2 addition to the line and definitely feels like he could be quite popular to how unusual he is. I'm glad to see this line keep going and am especially glad to see the weird designs keep rolling out. The Fish Robot definitely continues this line's quirky charm and makes for a great villain for playtime or a bizarre conversation piece on your minifigure shelf. If you're looking for him, look for the bag punched with the number 56 on the top left on the rear of the packaging.