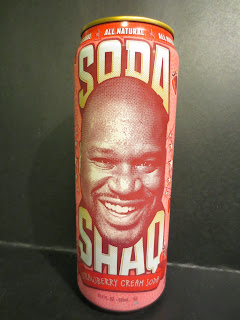 This review originally appeared on The Epic Review back in 2014!

Shaquille O'Neil may have never been bigger! Not only does he have a role in the excellent The Lego Movie, but he also has his own line of soda from Arizona Beverages. I really don't drink much soda at all but I picked this up because A. I'm a sucker for strawberry cream soda, B. The can looks really cool and/ or crazy insane. Arizona seems to be the go to people for delicious beverages from celebrities, including their official Arnold Palmer lemonade and tea blends and their Jack Nicklaus Golden Bear honey lemondade, so it is cool to see Shaq get into the soda business. How's it taste, though? More refreshing details after the break.... 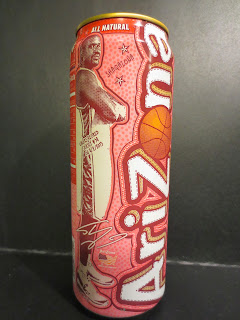 First, can I once again say how much I love these cans? Not only does it have a cool, smiling picture of Shaq on the front, but it also has a fully body portrait of him on the side. I also like how the "O" in Arizona is a basketball. Sometimes I forget that Shaquille O'Neil played sports; I usually only remember him because he had a toyline, starred in Steel and Kazaam, and got beat by Aaron Carter. Oh, and he was in the game Shaq-Fu. To be honest, I preferred Michael Jordan's Chaos in the Windy City better.

The can is really tall and only cost me 99 cents. Plus tax. 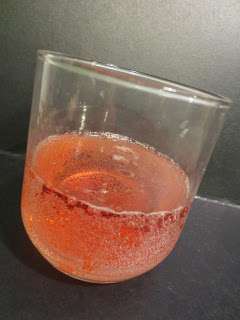 The strawberry cream soda is delicious. The soda claims it is all natural and I can believe it. It doesn't taste overly syrupy or have that fake strawberry taste to it. It is quite good with a wonderful flavor to it that even my wife (who rarely likes any food or beverage) said she enjoyed. Good job, Shaq. Your dedication to a superior product has certainly paid off. This is clearly not the Shaq-Fu of sodas. It's more like the Soul Calibur 2 or Street Fighter 2: Turbo Edition of sodas.

Who knew that in addition to having an Ed.D in Human Resource Development that Shaq was also an expert soda maker? I swear, the only thing that Shaquille O'Neil cannot do is walk through doorways without ducking. If anyone ever decides to reboot the cartoon Prostars, I want them to add Shaq to the team. 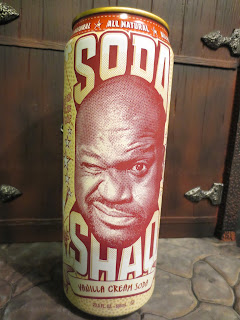 Here's the basic Vanilla Cream Soda. It's also good. Not as good as the strawberry flavor, but still much nicer than your average cream soda. It also has a really cool picture of Shaw on it that I believe was taken while he was at his optometrist having his eyes examined. When I was buyig this soda at my local grocery store, some guy in line seemed rather startled and asked me "What in the world are you buying and why is Shaquille O'Neil staring at me?" I took an opportunity to tell him about the soda (this was probably the third time I partook of this beverage) and about ThEpic Review. I hope he's reading this! Hi! 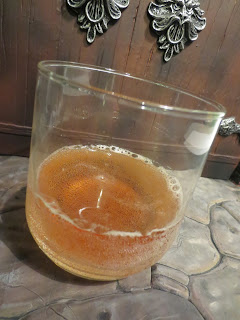 Shaquille O'Neil: Basketball legend. Actor. Rapper. Doctor of Education. Honorary U.S. Deputy Marshall. Person over 7 feet tall. Reserve Police Officer. Soda Maker. All of these things can be applied to Shaq, aka Shaq Fu, aka The Diesel, aka The Big Galactus. The man is a legend and now he's leaving a legendary impact on the world's collective tastebuds. For the full experience, try enjoying this beverage while playing Shaq Fu, listening to Shaq Diesel, and wearing some Shaquille O'Neil cologne (I'm sure they make it).