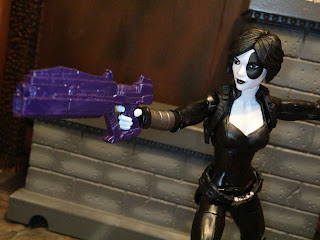 I've picked up lots of cheap Marvel Legends figures lately and another one I picked up was Domino, or "Marvel's Domino" according to the package. Released as part of the first Deadpool themed series which included the Sasquatch Build-a-figure, Domino, AKA Neena Thurman, came out right around the release of the excellent Deadpool 2 in theaters. While Hasbro didn't release a version of Domino that looked like actress Zazie Beetz (who was awesome in the role and has pretty much the best name ever), they did make sure that we got comic versions of the main Deadpool 2 cast. It's been quite a few years since the last Domino figure was released in Marvel Legends so she was definitely due for an upgrade, right? Let's check out Domino after the break... 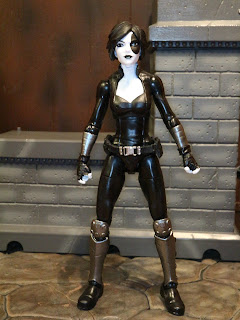 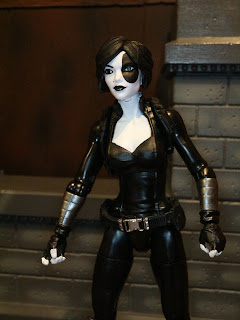 * Domino is a pretty cool looking figure. Decked out in all black and silver against her stark white skin, she kind of reminds me of Death from Sandman. She looks far more tactical, though, which is befitting someone who has been a part of nearly a dozen special forces and mercenary teams such as various incarnations of X-Force, Six Pack, and the NSA. The paint work is simple but accents everything well. 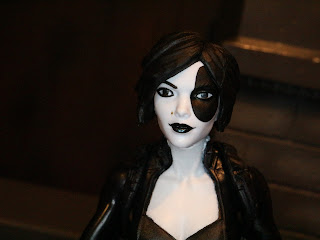 * I like the headsculpt and the expression along with the work on the hair. Domino has had multiple different hairstyles over the years but I really like this modern one. I also like the very noticeable black ring around her left eye. It definitely resembles a domino pip. 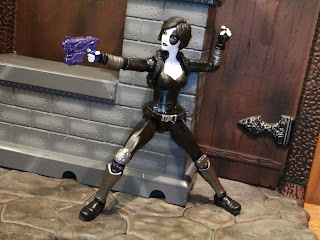 * Hasbro continues to tweak the articulation on the Marvel Legends figures and Domino definitely has some of the best current articulation. You can definitely have some fun putting Neena into a multitude of killer poses to show off her mercenary skills. 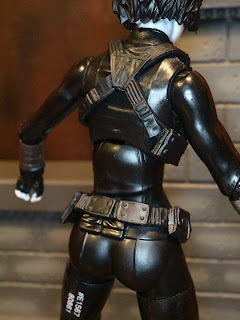 * Not only does she sport two belts to show off her origins as a Rob Liefeld creation (one is a separate piece that floats over her waist) but she also has a cool harness that probably holds a few extra magazines for her pistol. It's easily removable but gives the figure just a bit more of an edge. 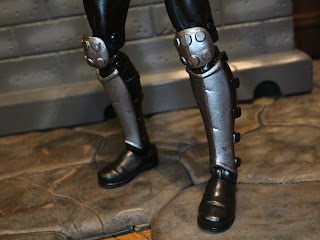 * Domino also has some pretty impressive looking boots. Well, the knee pads and shin guards are what is really impressive. They look pretty wicked and a bit more old fashioned than super sleek modern super spy, but I dig them. They're probably helpful for kicking bad guys or preventing shin injuries from walking into low pieces of furniture. Wait, with Domino's luck she wouldn't do that, right? 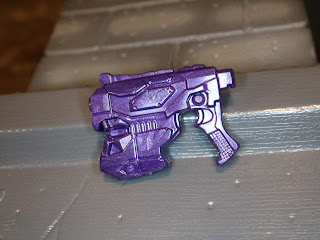 * Domino comes with two pistols, the first of which is this very Halo-esque pistol. It looks kind of like a Nerf blaster but I could also buy it as a tribute to the oversized, boxy weapons of the X-Force comics of the early 90s. The metallic purple just pops, doesn't it? (Deadpool in his boxers has this same pistol, FYI.) 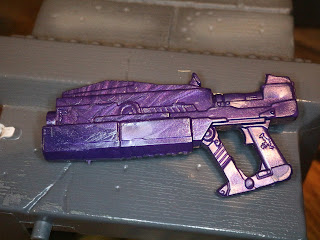 * Deadpool also has this pistol, too, but Domino's looks better due to the purple color. It's a cool, boxy looking blaster that also looks like a Nerf weapon.

* Remember that if you buy this new in the package, you're going to also get the right arm of Sasquatch. 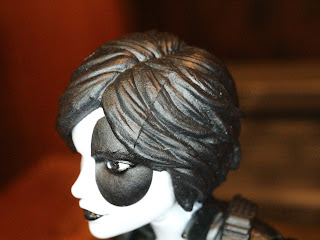 
* I like Domino's hairdo but she has some definitely visible molding lines. Weird, huh? 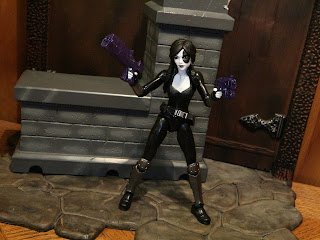 Domino is another solid Great and a 1/2 release for Hasbro. As a massive DC fan I wish DC Comics was getting this level of care and attention in their action figure offerings! I do like Marvel though, especially characters I remember from when I was younger and the X-titles were all the rage. Domino looks awesome, has some cool weapons, and is tons of fun to play with. While we don't have a movie version of the main X-Force players it is still cool to have some comic versions of them, huh?