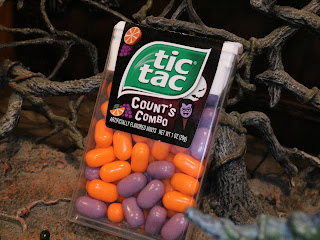 Lately I've been republishing some of my older candy and food reviews from my days at The Epic Review but I'm excited because I have some great reviews of Halloween treats coming up in the coming weeks to make 2018's Hokey Halloween Horror one for the books. First up is a pack of Halloween flavored Tic Tacs: Count's Combo! I know these have been around since at least 2017 but I picked up a few packs of these this year. Back in 2013 I reviewed the Bewitching Blend so I guess it is way past time that I review some more Tic Tacs. I don't eat Tic Tacs often but I don't know why. It's kind of fun to carry around a small package of colored candy that doubles as a maraca. Now throw in the fact that this package features Halloween colors and a picture of a vampire that looks like he belongs on the cover of a Mad Libs book and I'm sold. Let's check these delightful little 2 calorie breath mints (actually 1.9 calories) after the break... 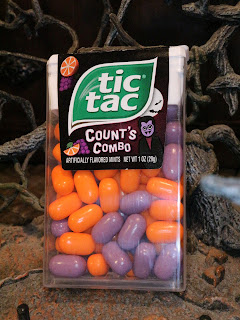 Contents: 60 Tic Tacs and a cool plastic container that can be used to store various stuff. As a kid I filled them with dirt and sand to make homemade smoke bombs. That doesn't work too well but you can try it and see how you do. 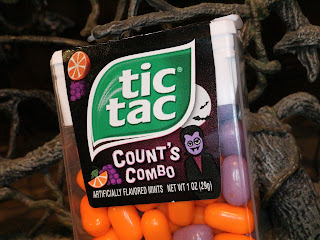 * First, let's check out the packaging. It's kind of reserved but I like it. The vampire is OK, and he definitely needs to be here since he is the titular character in this candy creation, but I like the moon with the bats around it maybe just as much as the vampire, if not more. It is just more atmospheric and if there is something I need to go along with my Tic Tacs, it is atmosphere. It's a cold autumn night. A wolf howls. There is movement in the woods nearby. A nearby scarecrow starts to move. As I tightly grip my revolver loaded with silver bullets I pull a pack of Tic Tacs from my jacket pocket and savor their crisp, fruity flavor. 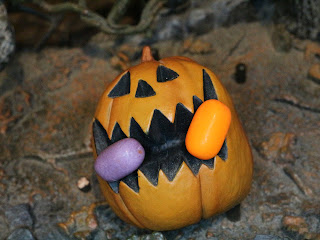 * The Count's Combo consists of two colors and flavors: Orange and Grape. These aren't unique Tic Tac flavors but the pairing seems to be (I don't remember orange and grape paired together, do you?). The orange Tic Tac is a true classic and, interestingly, it always tastes like orange with a very citrusy tang to it. It's almost "minty" but it's definitely citrus. The grape is a bit more sour than the orange but still is fruity and refreshing. 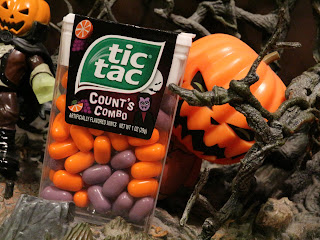 So... Count's Combo. Not the greatest pack (I still like Bewitching Blend a bit better) but still fun. I actually found these at a store that dealt in overstock and they had them for a $1 a pack. I think I ended up with three packs of these because I knew I would need at least one for the review and I knew I would want one to begin eating on the way home. Personally, I think a fruity red Tic Tac would have pared better thematically with the purple Tic Tacs as red and purple just seem like better vampire colors. Still, purple is as close to black you're going to get for a fruit based candy so you can't knock Ferrero for offering their take on the classic Halloween colors.
Posted by Barbecue17 at 9/05/2018