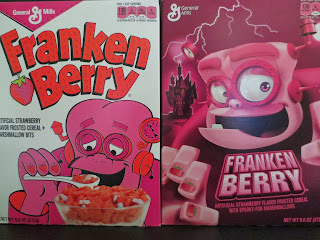 While Boo Berry has always been my favorite of the monster cereals, I've got to say that I think I've been converted to a Franken Berry fan. Don't get me wrong, Boo Berry himself is still the coolest of the big three monsters, but Franken Berry's artificial strawberry flavor just rocks my world. I particularly love drinking the strawberry milk afterwards as well. I'm getting ahead of myself, though. Let's start with some history: Franken Berry was one of the original two Monster cereals released by General Mills in October 1971 (the other was Count Chocula). It was a mainstay of the breakfast cereal aisle until 2010 when the product became available only seasonally, which is a darn shame if you ask me. Now that all five monster cereals are available this fall you can not only pick up Franken Berry but you also have the choice of either the classic box art (as seen on the left and available exclusively at Target) and the modern box art on the right. Ready to read more about Franken Berry then you ever wanted to know? Then join me after the break... 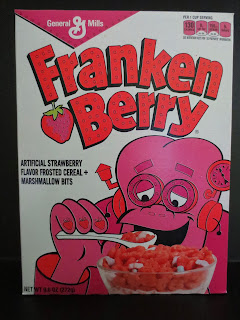 Here's the classic box. It's really pink and just jumps off of the shelf at you. I mean, it's really pink. And I gotta admit, Franken Berry is kind of lame. I respect his accomplishes and his position in the pantheon of breakfast cereal icons but really? A pink Frankenstein with strawberries on his fingernails? I'll admit that I do love the steam powered gadgets and gauge on his head, so he's not a complete wash. His head looks like a butt, though. Just look at it for a minute. Try to imagine Sir Mix-a-Lot dancing on Franken Berry's head. Yup, that's an image that will never leave you. Muahahaha!!! 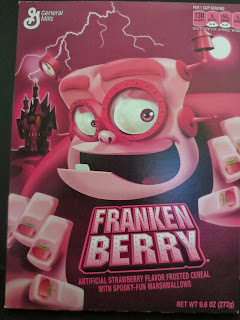 Here's the newer box and I think it's an improvement. I like the shape of the head better. There's still a lot of pink but it just flows better. The nose looks better, too. Honestly, if General Mills is ever going to make a monster movie, they need to jump in and do it now so they can make sure to get Danny Devito to play Franken Berry. Wouldn't he be perfect? 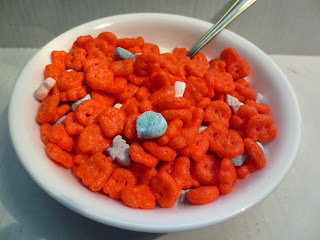 So here's the actual cereal itself. It's bright pink and shaped the same as the rest of the monster cereals (with the same marshmallow shapes as well). How do they get the cereal in those shapes? Do they poor it in mold? Use a giant punch? I have no clue about how cereal is actually made. I think the pieces are ghosts but if you turn them upside down they kind of look like little Franken Berries. 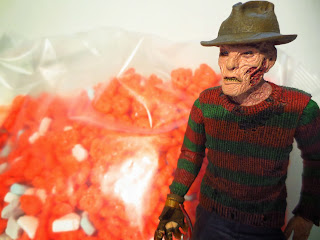 The flavor is just amazing. It's nice and sweet with a hint of artificial strawberry (one of my favorite artificial flavors behind artificial watermelon, artificial blue raspberry, and imitation crab meat. There's a good mixture of marshmallows to supplement the crunch of the cereal. Unlike some breakfast cereals (like Lucky Charms) you won't find yourself picking out just the marshmallows and leaving the cereal bits- the cereal speaks for itself and stands alone.
A + for you, Franken Berry. You may look like you belong on the cover of an eight year old girl's diary, but you make a darn fine breakfast cereal.
Posted by Barbecue17 at 9/13/2018