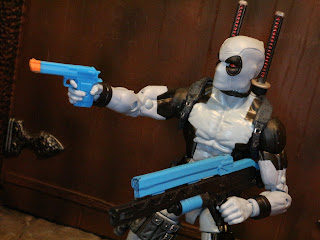 Recently I grabbed quite a few Marvel Legends figures loose from some sellers for some very, very low prices. Today I'm checking out the X-Force Deadpool figure from the Sasquatch Build-a-figure series of Deadpool figures that was released in late spring/ early summer to coincide with the release of Deadpool 2 in theaters. While Hasbro hasn't released anything directly resembling the characters from the Fox Marvel films in quite some time (I think the last true tie ins were from The Wolverine back in 2013, and no Marvel Legends were released) they definitely have been getting better at coordinating releases of the films comic counterparts. While Deadpool 2 definitely has a tribute to Wade's X-Force costume he never wears this specific outfit in the film (the gray coloring is just from dust covering his outfit), who knows what future films will have? Hasbro certainly is fond of this variant as a version of X-Force Deadpool has appeared a few times previously and this one is largely a redo of the HasCn exclusive Deadpool from last year. Let's check out this 2018 version after the break... 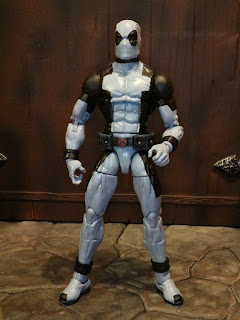 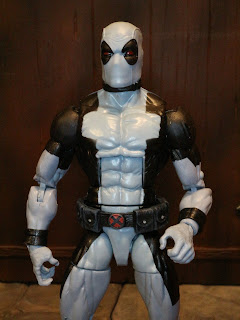 * While we've seen this body over and over (it might be time to replace it, Hasbro) it still works well for a superhero outfit. It look shredded and the paintwork is fairly neat and clean for a mass market toy. The black and grey color scheme is quite sleek and definitely offers a nice variation on all of the red Deadpools I have sitting around. Deadpool also has lots of cuffs on this outfit, including a cuff around his collar and cuffs on his wrists and ankles. These are separate pieces added over the basic sculpt. 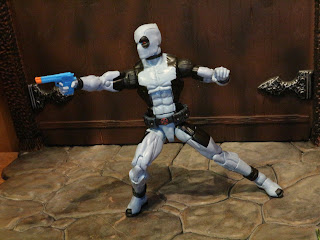 *  The articulation is as good as on nearly any other Marvel Legends figure. Most of the joints have the little teeth in them which keep them in place. Deadpool is well articulated, fun to play with, durable, and kill happy. Have fun having him annoy all of your other action figures! 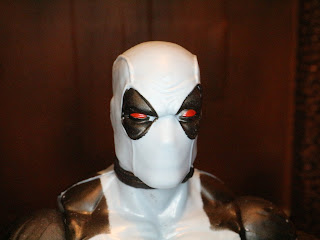 * I don't have another Marvel Legends Deadpool that uses this headsculpt so I'm not sure if it's reused or not. It's a bit grimmer than some Deadpool headsculpts, which really works here. I love the blood red eyes, too. Hey, there was even a scene in Deadpool 2 where Deadpool gets blood in his eyes, causing the usually white lenses to turn white. Easter egg? 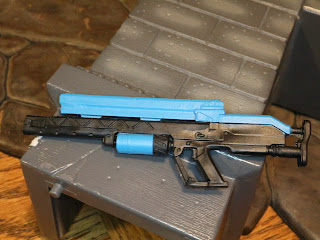 * Deadpool includes a rather strange rifle that I cannot identify. It looks very futuristic and comic book inspired, kind of like a Nerf blaster. It is the same sculpt that was included with the HasCon exclusive X-Force Deadpool that was released last year and now is a crazy expensive figure, although that one has red highlights. 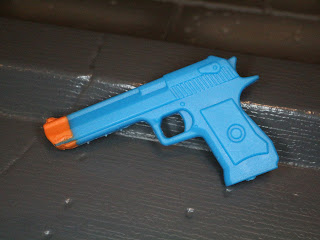 * Deadpool's second weapon looks like a Desert Eagle pistol except it has been painted blue. And given an orange tip. Other figures have been armed with this pistol but only Wade Wilson's has been painted to look like a toy complete with an orange safety tip! 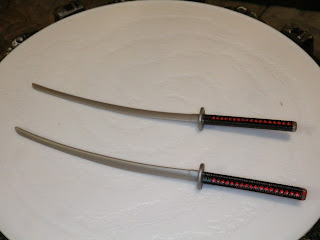 * Last up, Deadpool comes with two katanas. You'd be disappointed if he didn't have them, right? They actually have a nice red and black paint scheme on the handles, too. 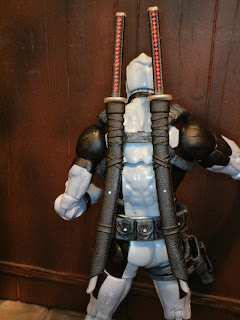 * Deadpool comes with a removable harness that features two sheathes for his katanas. This fits on him really well and the swords slip inside very easily. 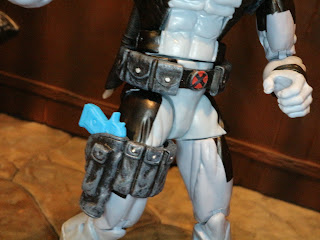 * To complete his tactical look Deadpool has a cool belt with the X-Force logo and lots of pouches along with a thigh holster with multiple ammo pouches, too. The thigh holster is easily removable, if you want to use it for something else, and it slides down over his right leg to be removed. The pistol fits inside like a charm.

*Remember that if you buy this figure new, you're going to also get the head for the Build-a-figure of Sasquatch, 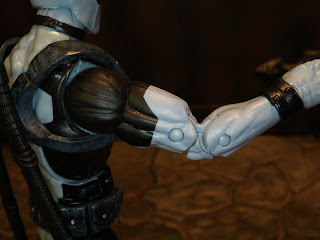 * Like most of the Marvel Legends figures that use this body (and there are a heck of a lot of them) the elbows are far too rubbery. I wish Hasbro would make the material just a bit stiffer. Also, the shoulders can be tough to move. They seem rather too stiff. 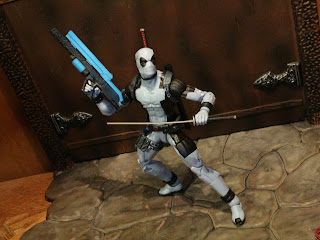 You know what? This is a really, really fun action figure with lots of accessories. If you count the BAF part, the harness, and the holster, Deadpool comes with seven accessories. That's largely unheard of for a mass market figure, isn't it? Since this guy is a redo of last year's HasCon exclusive Deadpool some folks will probably want to skip it. That's A-OK. If you don't own that version or don't have the money to pony up, this is still a Great and a 1/2 figure. He's fun and loaded with extras!


For more reviews of merchandise based on your friend Deadpool, check out the reviews of Mezco's One:12 Collective Deadpool, the X-Men Origins: Wolverine Deadpool and Comic Based Deadpool,  the Toy Biz X-Men: X-Force Deadpool, and the Marvel Legends Deadpool in his boxers.