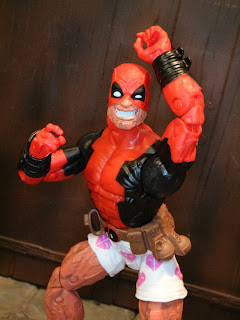 Hasbro has definitely gone all in on releasing Deadpool figures in Marvel Legends, haven't they? While they can't/won't release any Deadpool movie based figures, they're certainly getting the comic versions of all of the characters from the films out. Of course, they're also having fun with the crazy Deadpool variants and this time we get what you might call "Casual" Deadpool. It's your standard, garden variety Deadpool but he's got his mask up (presumably for snacking) and his pants off, presumably for just chilling out on the couch. He's an interesting choice for a variant and he was too hilarious for me to pass up. I'm not a huge Marvel Legends collector but every now and then I pick some up for fun. Deadpool is part of the recent series that includes the Build-a-Figure of Sauron (Dr. Karl Lykos, not Mairon the Admirable) but I managed to get him for about half price without his build-a-figure part (Sauron's head and torso). Let's chill with the Pool-man after the break... 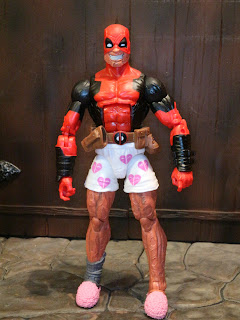 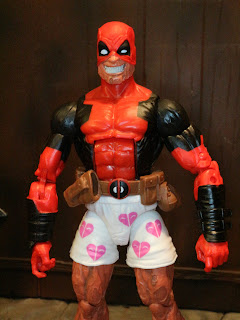 * This is a pretty fun looking figure. Whether you're a massive Deadpool fan or not or a huge Marvel collector or not, there definitely is no reason that you shouldn't want an action figure of Deadpool not wearing his trousers. He's quite unique and it seems like Hasbro gave him a unique sculpt from the waist down. His boxers are covered with little pink Deadpool styled hearts, too, which I find to be just delightful. 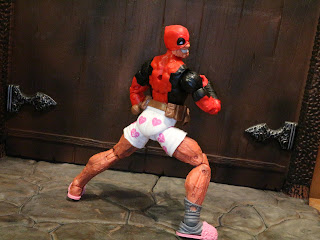 * The articulation is as good as on nearly any other Marvel Legends figure. Most of the joints have the little teeth in them which keep them in place. Deadpool is well articulated, fun to play with, durable, and sexy. Have fun having him creep all over your other action figures! 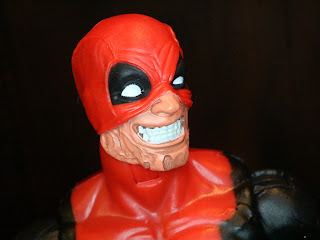 * The headsculpt is quite good and nicely offers up something different as it shows Deadpool showing off his lower face. He's got a big grin on, too. 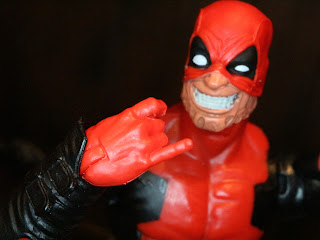 * I love that Deadpool gets a special hand for firing his pistol. He sticks that pinky finger out because he's classy, darn it. 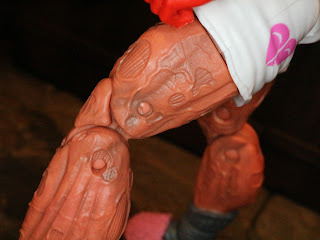 * The sculpting on Deadpool's legs is pretty nasty, which I dig. It's definitely on the grislier side of what you'll find at mass market retail and it's completely unique to him, so good on you Hasbro. 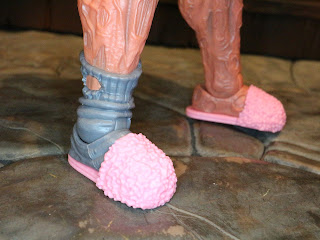 * For extra comfort Deadpool is wearing some fluffy pink slippers. He's also only wearing one sock. It's dirty and has a hole in it, so maybe we don't know where the other sock is? 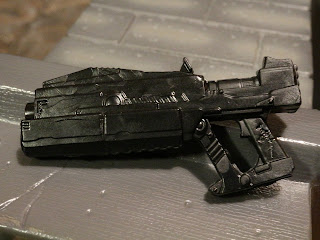 * Deadpool comes with two guns, both of which aren't very realistic but do look pretty cool (kind of like Nerf blasters). The larger of the two guns is about the size of an SMG and is very boxy and futuristic. 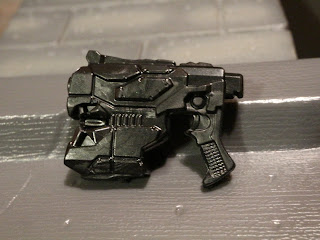 * The second gun is a smaller pistol. It again has the boxy, futuristic appearance of a Nerf blaster.


* Remember that if you buy him at retail, you'll also get the torso and head for the Sauron BAF. 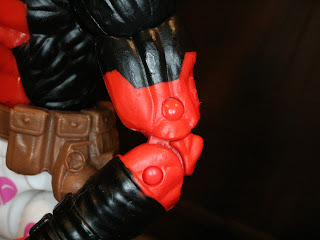 * Hasbro's Marvel Legends series is easily one of the best toylines out right now and one of my only complaints about them is that they often use a very rubbery plastic on the elbows and knees. Deadpool's knees are fine but his elbows are pretty rubbery and feel weird. 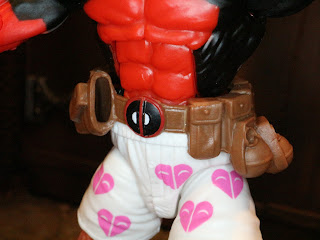 * Deadpool's belt looks pretty cool in and of itself but it has two major problems. First up is that it has a holster but no pistol that fits it! What? That is definitely a violation of Barbecue's 10 Commandments of Action Figures and it pisses me off!

*Second, why didn't Hasbro paint the grenades? Why are the grenades the same brown as the belt? That's a pretty big paint detail to just skip over! 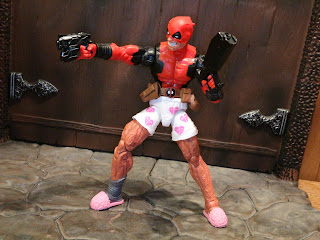 Despite the flaws (which are frustrating but not deal breaking) Deadpool in his boxer shorts is a pretty fun action figure. He's fun to pose, fun to play with, and just fun to put out on your shelf or desk as a conversation piece. Who doesn't want to talk about a pants-less Deadpool? Nobody, that's who. This is a Great action figure and a fun figure in one of the many new series of Marvel Legends. Hasbro keeps cranking them out but when they're all so good, who can blame them, right?


For more reviews of merchandise based on your friend Deadpool, check out the reviews of Mezco's One:12 Collective Deadpool, The X-Men Origins: Wolverine Deadpool and Comic Based Deadpool,  and the Toy Biz X-Men: X-Force Deadpool.