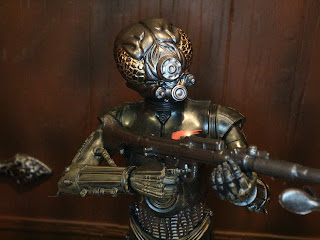 I actually procured 4-LOM the day Solo: A Star Wars Story was released but it's just taken me a few weeks to get to him. The fourth member of The Empire Strikes Back bounty hunters to be released, 4-LOM is definitely one of the most wanted figures of 2018. Hopefully this year will see us completing the sextet as Dengar should be coming out in a future series later this year and Zuckuss, who was once planned to be a Toys 'R Us exclusive, apparently has now been picked up by another retailer. There's still just something insanely captivating about the group of bounty hunters gathered by Darth Vader aboard the Executor and the prospect of completing them has me majorly excited. 4-LOM is included as part of the second series of figures released for the Solo film and is one only two new figures in the case of eight (Qi'ra is the other) meaning that unless Hasbro repacks this guy down the road he is probably going to be difficult to find. Seriously, Hasbro: You really should have double packed this guy! Original Trilogy figure + Empire Strikes Back + bounty hunter equals hot commodity! Let's check out the lovable 4-LOM after the break... 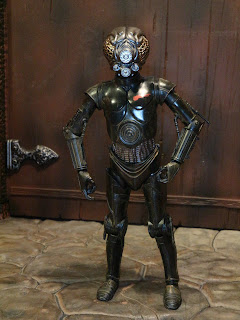 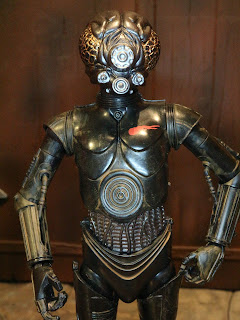 
* 4-LOM looks near-perfect. Being a protocol droid with a head modeled after the Gand species, 4-LOM contains a great mixture of both droid and alien in his design. While the figure is completely new from the waist up, 4-LOM does reuse the legs and possibly pelvis of C-3PO. This is accurate to the film and the in-universe lore, so I can dig it. The plated armor features some excellent detailing and a great paint job that captures the look of the droid bounty hunter. 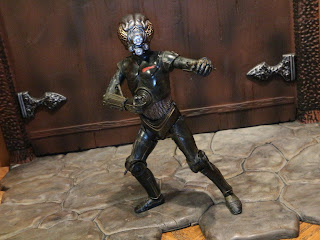 * While 4-LOM is a protocol droid he still has a pretty great complement of articulation featuring every joint you'd expect from a Black Series figure. The joints are really well worked out to fit the droid's body, though, as 4-LOM has his mid-torso joint right above the mass of wires at his stomach and hinged knees that function in the way you'd expect due to the design of the costume. While he only stood around on the bridge of the Executor, you can have 4-LOM do about anything you want him to. 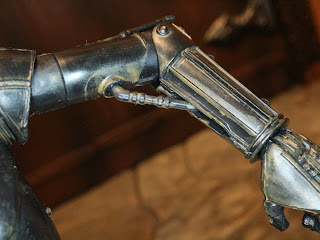 * One of the coolest features is the functioning piston hinge on 4-LOM's elbows. Unlike C-3PO, who featured non-articulated elbows, 4-LOM has a piston that is on a balljoint which attaches into a groove on the forearm. Moving the elbow joint in and out makes the piston function. Very, very cool design! 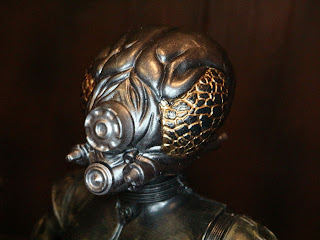 * 4-LOM is a LOM series protocol droid featuring a head based off of the appearance of the Gand species, this explaining his insect-like appearance and his resemblance to Gand bounty hunter Zuckuss (whose names were switched in the vintage Kenner line). The paintwork and sculpt of the head is incredible, especially the detail on the eyes. 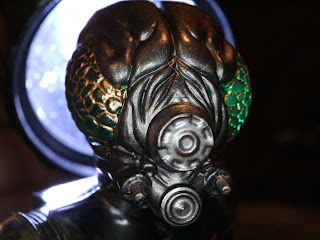 * Want to know something else cool about the eyes? 4-LOM's eyes are translucent and green, just like the movie prop helmet. It's tough to see but shine a bright light around the figure and the eyes glow a brilliant green. 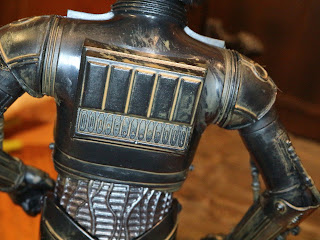 * The figure features a very worn and battered paintjob that makes the droid look very worn and rusty. Hasbro went all out here and did an excellent job of capturing the droid's appearance. He's really in need of a good oil bath, isn't he? 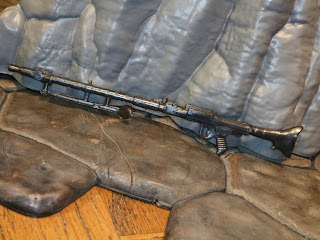 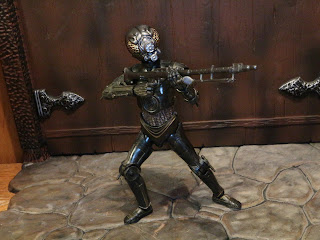 Hasbro really goes all in on the Original Trilogy figures and 4-LOM is another winner. The Black Series is easily one of my favorite action figure lines at the moment (possibly my favorite) and I'm always thrilled to add more characters to my ranks. 4-LOM has a great sculpt, some excellent paintwork, and some clever engineering on the eyes and elbow pistons that help him to stand out just a bit more. He's a Great and a 1/2 figure who will, unfortunately, probably require you to hire a bounty hunter of your own to track down.

The only other 4-LOM collectible I've reviewed is the Micro Machines Mini Heads 4-LOM.