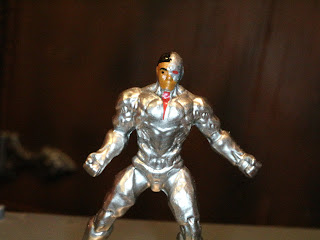 With the release of the Justice League Cyborg in series 4 Jada Toys has now released five of the DCEU Justice League members in the Nano Metalfigs. Guess who the sixth member they've left out is? Wonder Woman! How? How? Jada Toys has released quite a few Wonder Woman figures, too, so it's odd they've left out the Gal Gadot version. It can't be written off as being a "because she's a girl" attitude because they've released multiple Wonder Woman and Harley figures as well as multiple other female characters. How strange! Maybe they figure she'll be a selling point for series 5? Still, adding Victor Stone in is a nice touch. Appearing in two of the DCEU films (counting his cameo in BvS) Cyborg is probably tied with Aquaman thus far for having the fewest on-screen appearances thus far. Of course, Cyborg is doing just fine for himself as he appears on Teen Titans Go, which kids are nuts about. I'm pretty sure that show airs all day long. This figure is based on Ray Fisher's performance of the character. Let's check it out after the break... 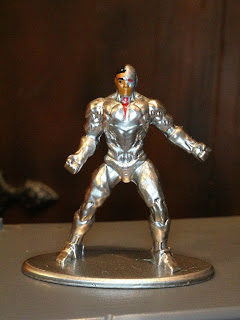 
* Cyborg's pose is kind of dull and there's definitely a lot of silver here but he's easily recognizable as the character. I do like the look of the metallic body as it captures the character's build well. He looks pretty built and menacing. 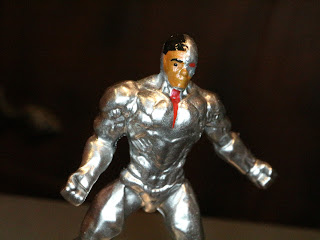 * The face is handled really well on this figure. While the body could have used more paint to try and emulate Cyborg's inner working that are displayed in the film, everything else is a pretty nice approximation of the character for a figure smaller than 2 inches. 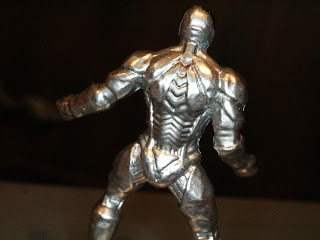 * The sculpting is pretty impressive, especially on the back. I love the work on the metal "musculature" of Cyborg's body. 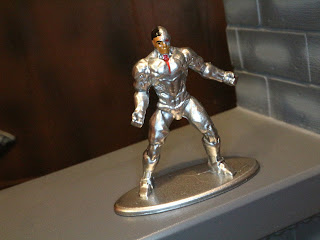 While there is a lot of silver here and a somewhat bland pose, Cyborg turned out pretty well. He's easily recognizable and has some really nice sculpting on his mechanical body that is easily overlooked at first. Since Jada Toys introduced the DCEU Justice League into the line last year it's nice that they've continued to add to the team. Hopefully we will see Wonder Woman soon to complete the set! Cyborg is a Great minifigure and another fun addition to this line.

I've reviewed a few other Cyborg figures on Action Figure Barbecue: The standard Justice League Multiverse Cyborg, the Wal-Mart exclusive Multiverse Cyborg, and the Cyborg die-cast minfigure from the Pack A 5-pack of DC Nano Metalfigs from Jada Toys.