Something Has Survived!: Mosasaurus from Jurassic World by Mattel 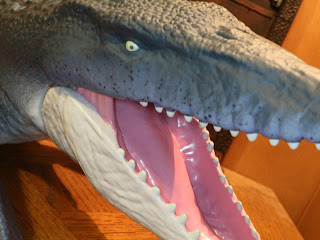 I just rewatched Jurassic World a day or so ago and I still really enjoy the film. Having just rewatched all of the films again (including The Lost World for the first time in almost 20 years) I'm definitely willing to place Jurassic World as my second favorite film in the franchise, only behind the original (although I have a lot of love for Jurassic Park III). Not only does it further the concept of the first film but it offers up some more science fictional/ scientific ethics food for though. Sure, it's still an action film but Jurassic World, while having some very similar beats to the original film, asks some questions and explores some new ground that the sequels didn't. Plus it's a darn fun film that I find to be legitimately frightening at times. One of the scariest parts of the film for me is the Mosasaurus, a giant underwater creature. Giant underwater creatures just freak me out! What's pretty crazy is that in Hasbro's ill-fated original Jurassic World movie line the only Mosasaurus made was fairly small. While the packaging doesn't reference this, Mattel's new Jurassic World line is actually designed to coincide with the release of Jurassic World: Fallen Kingdom even though it includes creatures and characters from multiple films. I'm hoping the Mosasaurus makes a pretty significant appearance in Fallen Kingdom as I love the creature. Let's check out her new toy after the break... 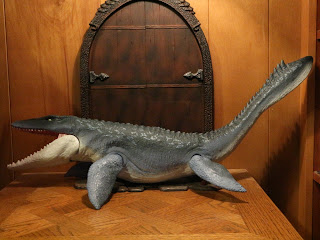 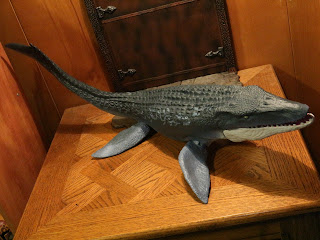 * First off... the Mosasaurus is huge!  I measured her at a little over 2 feet, so maybe 27 or 28 inches long? She's a massive toy and it's insane that she costs only around $30 bucks. The Mosasaurus is not the most complex toy out there but the sheer size and wow factor of this piece cannot be denied. Even better, Mattel had managed to sell her in a smaller package so that she seems less threatening at retail. I love this! 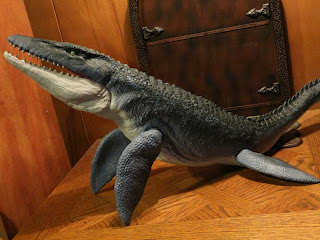 * The Mosasaurus has swivel/ hinged flippers so you can get some fun "poses" out of her. Let's be honest. She's not the most well articulated figure, but it kind of wouldn't make sense to have much articulation here. I'm not sure how it would work or what it would look like. The flippers add some playability and they work great. 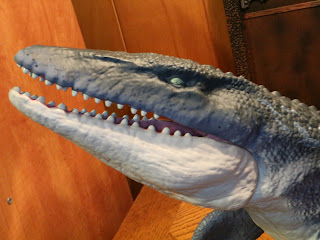 * The headsculpt is pretty solid. Most of the figure is made from a softer material, similar to some of the older Kenner Jurassic Park dinosaurs, so the sculpt isn't as crisp as on a figure molded in hard plastic. It isn't bad looking, though, and managed to capture the film models appearance as well as the "Jurassic Park look" of the dinosaurs from those films. 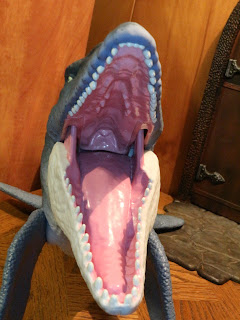 * The opening lower jaw is incredible. I really love this feature (I love the fact that so many of the dinosaurs in this line have opening jaws) and how fun it is to have the Mosasaurus attack different toys and/or pets and small children. I know my four year old is still a bit unsure of the Mosasaurus if I'm sitting around fooling with it but when she has it, look out! She loves to terrorize people with this thing! 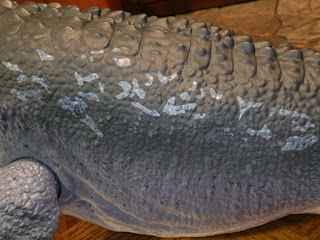 * Like some of the older Kenner Jurassic Park figures, the Mosasaurus also has soft skin that's billed as being "authentic." The sculpting and paintwork on the main body isn't bad at all and definitely adds some more life to the creature. Plus, it's kind of soft and squishy. 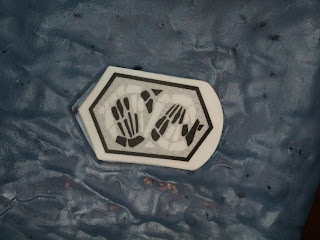 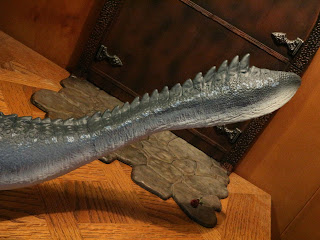 * Since it is a separate piece that is constructed a bit differently, I do wish the tail had some articulation. Even a balljoint at where it attaches to the main body would have been welcome. 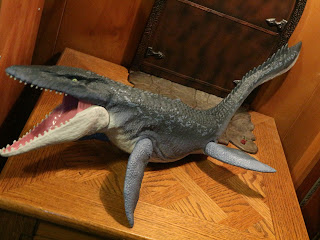 Going into 2018 I didn't have any expectations of collecting a Jurassic Park line again. Mattel changed that with a very fun, very exciting range of product. It's nostalgic enough that older fans like me are invested in it while still being fun and fresh enough to appeal to the target demographic of kids. I cannot remember the last time I've seen a movie line be restocked as often as my local stores have been restocking Jurassic World. Mattel and retailers are doing a great job with this line and, with cool, affordable toys like this giant Mosasaurus, everyone wins! This is a large, massive, and fun toy that is well worth the money. My guess is that kids, parents, collectors, and paleontologists picking this toy up will be amazed at the size and coolness of the toy. Mattel sure seems to be avoiding the mistakes Hasbro made with the forgettable Jurassic World line so more power to them. The Mosasaurus is a Great toy and well worth scooping up!

If you're looking for more Jurassic World toys from Mattel, check out the following:
Indoraptor
Action Attack
Carnotaurus
Attack Pack
Dilophosaurus
Dimorphodon
Posted by Barbecue17 at 6/15/2018