Something Has Survived!: Island Transport Team from Matchbox: Jurassic World by Mattel 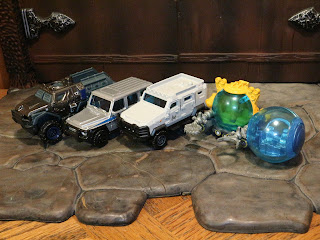 Since I reviewed the Legacy Collection Jurassic Park vehicles on Friday, today I'm checking out the Jurassic World and Jurassic World: Fallen Kingdom focused Island Transport Team set. Included are five Matchbox vehicles in one pack. While all five of these vehicles are available on single-packed cards, that version of the Armored Action Truck has a very different paintjob. I guess that means this set has an exclusive then? These are available at all stores, unlike the Island Explorers set which is only available at Target. Let's check out these vehicles after the break... 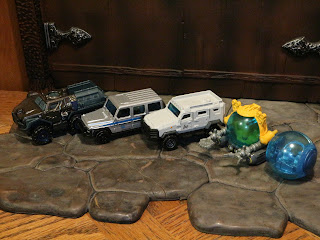 Length: Between 1 and 3 inches each 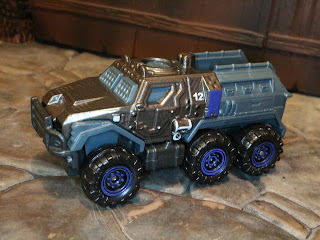 * Officially designated the BAE Systems Land & Armaments Caiman, this armored personnel carrier is supposed to appear in Jurassic World: Fallen Kingdom. Unlike most of the Matchbox vehicles, the Armored Action Truck here differs from the single-packed version (which I reviewed last month). The paint job is much darker here and it is designated as #12 rather than #5. Check out the previous review for the full details of the sculpt! 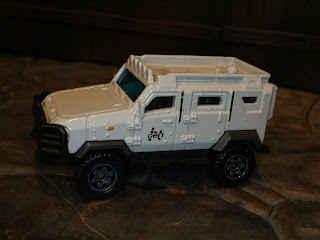 * Used by InGen security in Jurassic World, the Textron Tiger is a extremely well armored personnel carrier that seems to have the design of a standard jeep or SUV rather than a larger, boxier design. The vehicle definitely looks armored thanks to the sculpted detail on the various rivets and such. I also love the InGen logo on the door. 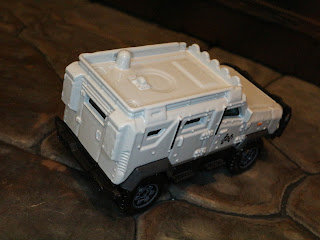 * Flip it around and you can see the armored top and rear door of this vehicle, too. It definitely looks like a vehicle built for some heavy duty usage. 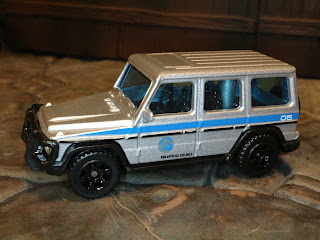 Driven by Owen and Claire when they go looking for the kids in the Gyrosphere, the 2014 Mercedes-Benz G 550 is the standard vehicle for general park transportation. You could say that it is the modern equivalent of the '93 Jeep Wranglers from the original Jurassic Park. 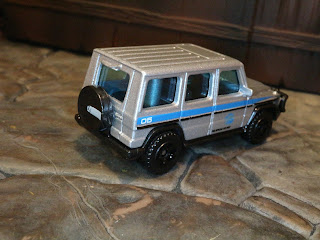 * The blue and silver paint work is quite nice and features a few other easily visible painted details including the #05 designation, the Jurassic World logo, and a "FOR OFFICIAL USE ONLY" warning. It's interesting that Mattel went with blue windows here, though, as the real vehicles aren't this tinted. Maybe they wanted to use the same translucent plastic mix as that used in the Gyrosphere. 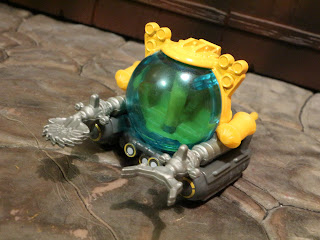 * Here is another vehicle that should be appearing in Jurassic World: Fallen Kingdom. To be honest, while this think looks incredible (it definitely reminds me of some of the submarines from the G.I. Joe, James Bond Jr., or the Real Adventures of Jonny Quest toylines) it doesn't give me much confidence that it would stand up against an attack from a Mosasaurus! 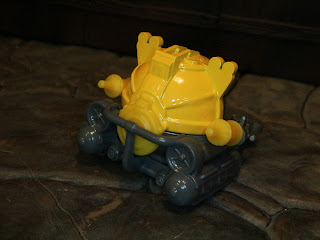 * The tools on the front are very cool (it definitely seems like a repair vehicle utilized by the Jurassic World staff) and the pack shows off some interesting design elements. You can also look in through the translucent bubble to see the seating for the riders. 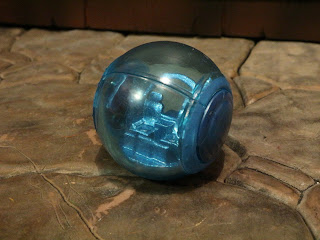 * Probably the most memorable vehicle from Jurassic World (along with Owen Grady's motorcycle), the Gyrosphere was a very cool invention that felt like a natural evolution of Jurassic Park's guided tour cars.  The Matchbox version doesn't come with an instructional video from Jimmy Fallon but it does feature seats that stay upright when the sphere is rolled forward. 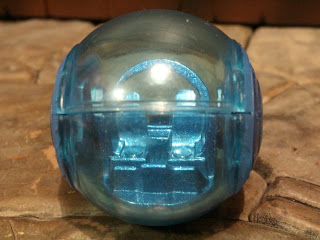 * The sphere isn't entirely translucent as the sides are solid plastic that hold the interior seating in place. It's an admirable little attempt at the vehicle although it definitely feels less substantial than the other vehicles in the line. 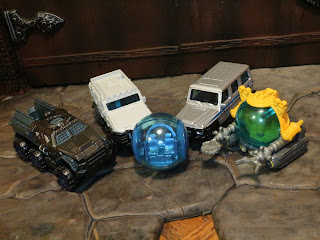 Anytime you're getting five vehicles for around $5 bucks, I think you're getting a good deal. While most of these vehicles aren't as recognizable as the vehicles from the Island Explorers set, they're still pretty well done. This is a Good and a 1/2 set and it both offers up some cool toys and gets me more excited for Jurassic World: Fallen Kingdom. I'm really excited to see the submarine scenes as the Mosasaurus (and giant underwater creatures in general) terrify me, so I'm hoping for something spectacularly frightening.


For another review of a Mercedes-Benz vehicles, check out the '97 Mercedes Benz ML320 from the Matchbox Jurassic World: Legacy Collection Island Explorers set.

For more reviews from the Matchbox Jurassic World line, check out the following:
Armored Action Truck
Posted by Barbecue17 at 6/10/2018