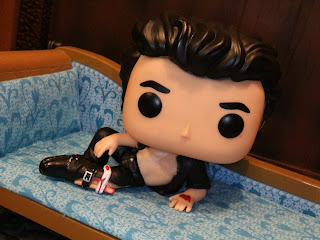 I know what you're thinking. A 'True Haunted Toy Story?' Don't you just write toy reviews and make terrible jokes, Barbecue17? Well, every now and then something happens to us that we just can't explain. My something started earlier this month. During a trip to Target I stumbled upon the Target exclusive Funko POP! of Dr. Ian Malcom from Jurassic Park. Jurassic Park is easily one of my favorite films of all time and, with Dr. Ian Malcom being one of my favorite characters, I knew I had to pick up this incredibly awesome and scene specific POP! vinyl of Jeff Goldblum in his classic shirtless pose from the film. Even if you don't click that link, you know what I'm talking about, don't you? I figured this would be a cool, fun Funko POP! to have around for nostalgia and a few laughs. Boy was I wrong! Since bringing this toy into my home my life has descended into chaos! Strange music! TVs that turn on by themselves! Changes in temperature! What is happening? I'm writing this because #1 I'm at my wits end and #2 I don't want the same fate to befall you. For a haunted toy tale more terrifying than Annabelle, keep reading! 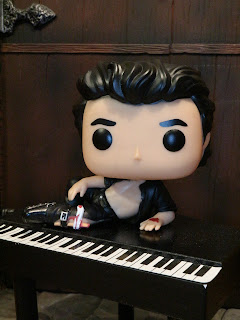 Accessories: None, although mine keeps showing up with an iMac. I don't even own an iMac!!! 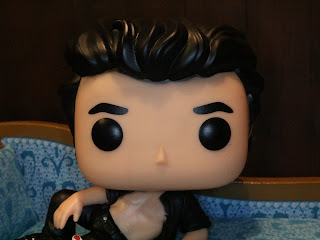 * Things started off subtly. I..I.. noticed that I was starting to hear a strange laughing at night and it was coming from my hobby room. Sometimes I would hear random "sniffing" sounds coming from in there, too. It's tough to explain. Then there was the non-stop jazz piano music. Even weirder was the feeling that I was being watched, especially when using the toilet. It only got weirder from there. 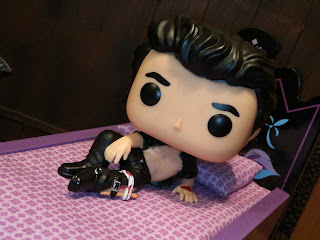 * I really started getting concerned when I first noticed that the Dr. Ian Malcom POP! had moved from its spot within my Jurassic Park collection to other random places. I first thought my daughter was playing with him as he kept showing up in the beds in her Frozen dollhouse but later I noticed that he was also appearing in other places such as in the bunk onboard the Millennium Falcon or just chilling out on the throne in Castle Grayskull. I'd move him but he'd keep disappearing. 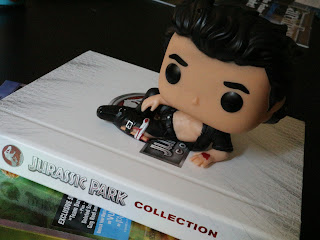 * My TV started changing by itself, too. Initially I'd walk in the house and Jurassic Park, the Lost World, or Thor: Ragnarok would be in the player. I brushed it off as we've been watching those movies lately. The phenomena kept happening, though, and soon my TV was non-stop playing The Fly, Death Wish, Transylvania 6-5000, The Adventures of Buckaroo Banzai Across the 8th Dimension, Independence Day, and episodes of Law & Order: Criminal Intent. I've never even seen Law & Order, so what's going on? 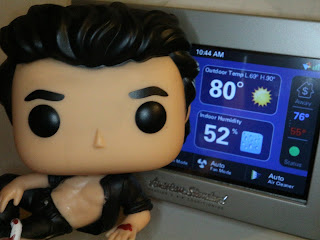 * The temperature in my house keeps going up inexplicably as well! I know summer is really just starting but ever since I brought this figure into my home both the humidity level and the interior temperature have risen to the point where I have to now walk around most of the time with my shirt cast open. 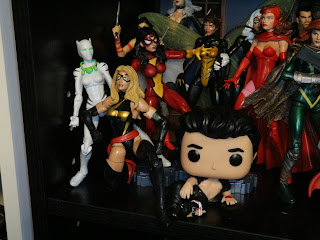 * It has been about two weeks since I've had this figure of the wounded Dr. Malcom and other figures I own have started disappearing, only to reappear in strange places. Last Thursday I snapped this picture of a bunch of Marvel heroines and villains surrounding Malcom. I don't mix my collections! How is this happening? 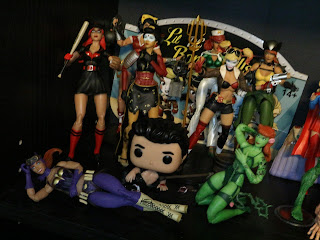 * Even the DC Bombshells are not immune to whatever devilish, irresistible lure lies within this plastic trinket! 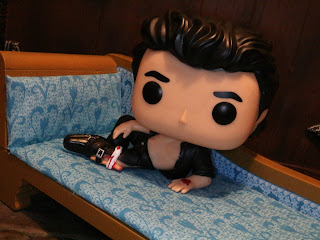 Alas, I fear that I may just have to deal with the situation I'm in. Jazz music at all hours of the night. Mysterious laughing. Strange phone calls from a telemarketer named Terry Quattro. Heck, anytime I turn on Jurassic Park, my copy of the film now has lyrics mysteriously inserted into the theme song. What gives? I thought this was an Epic toy, but I'm completely perplexed at what's happening to me and I'm at the end of my rope! If a fellow collector, Funko, or maybe even Jeff Goldblum could offer me some assistance in understanding what is happening in my home, I would appreciate it!


I've reviewed a few other POP! Movies vinyl figures, but none of those caused me any duress:
Jack Torrance #456 from The Shining
Michael Myers #03 from Halloween
Norman Bates #466 from Psycho
Pennywise #55 from It
Sam #57 from Trick 'r Treat
Posted by Barbecue17 at 6/20/2018