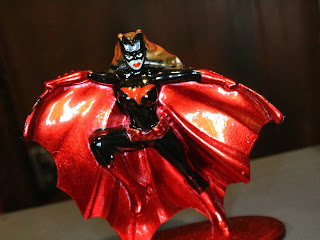 It has taken me a little over a month but I'm finally finishing my reviews of series 4 of the DC Nano Metalfigs from Jada Toys. Guess who I've saved for last? Well, I actually reviewed these in order of the series numbers, so she's the highest numbered yet, but guess who came in last? Batwoman! Batwoman is one of my favorite DC characters which means she is one of my favorite superheroes overall. She's easily in my top 10, just FYI. Anyways, Batwoman was the figure I was most looking forward to in this series so I'm excited to finally look her over. Let's check her out after the break... 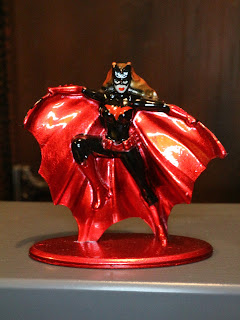 * First things first, Batwoman's black and red costume is very striking. The metallic colors of the Metalfig look great. Second, the pose is pretty cool. It's a bit more dynamic than most other figures and stands out in a good way. I like how the cape sort of "connects" to the base to create a better stand. 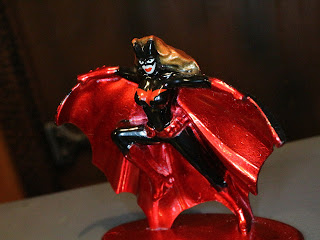 * Overall the paintwork is solid and striking but I have two problems. First is the hair, which seems to not be fully covered, revealing too much black. Second, while most figures seem to have improved in the area of faces, Batwoman's face looks a bit awkward. Part of this may be due to the fact that Jada tried to give Kate pupils, but that's not correct. her cowl typically has full white eyes. 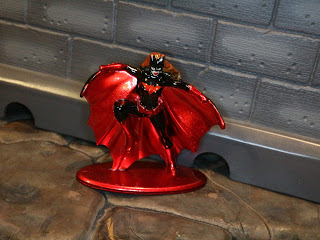 Batwoman was my most anticipated figure out of series 4 and while she has a few paint issues, overall she's another Great minifigure in this line. I'm pretty glad to see Batwoman so early in Jada's lineup. It took Mattel about 12 years to produce her in one of their articulated DC lines and DC Collectibles/ DC Direct has ignored everything except the Bombshells version of the character for at least a decade. If Jada can keep cranking out series with a diverse mixture of new figures like series 4, I think this line can have a long, healthy life.