Something Has Survived!: Indoraptor from Jurassic World by Mattel 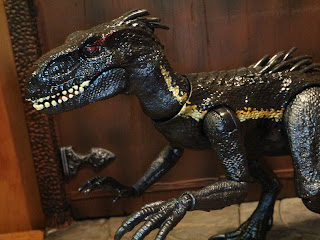 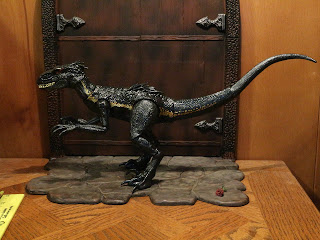 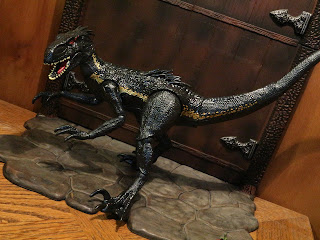 * First up, the Indoraptor is quite large and quite well articulated. I'm not an absolute expert on Jurassic Park toys but I do believe this is the most well articulated action figure to ever come out of a Jurassic Park line. This guy is fun to pose and definitely feels like a solid, well made toy. 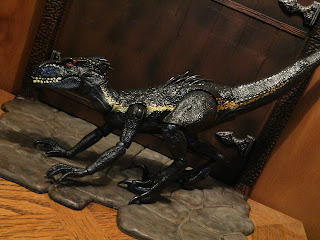 * One thing I love about the Indoraptor is that he seems to be able to go back and forth between walking upright on his hind legs (like a regular Velociraptor or the T-rex) to walking on all fours like a medieval depiction of a dragon. It's very, very creepy but makes for a great looking toy. I cannot wait to see this guy move on the silver screen! 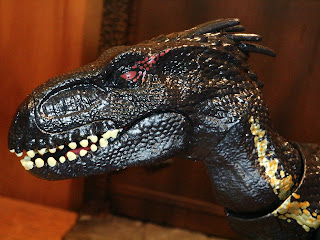 * The headsculpt is great. Again, there are elements of a Velociraptor here but also very alien elements such as the bizarre bristles on the back of the head and the red eyes with a reddish flow or skin markings of some kind. 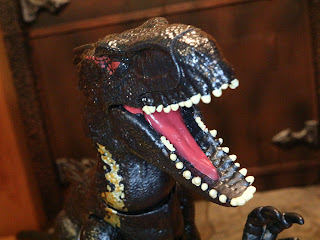 * The opening mouth on this guy is not only a cool feature that makes the toy more fun to play with but I'm also digging the sculpting and paint in the interior of the mouth. 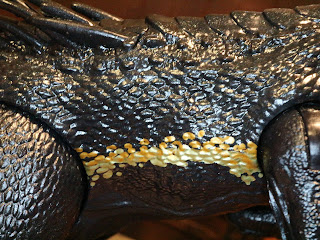 * The detail on the figure is really good at the sculpt level. To be honest, the sculpt creeps me out a bit as the black color makes it look very snake-like. The gold strips are kind of unnatural, too, which takes this dinosaur design to a different level. 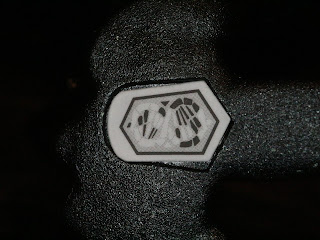 *   Remember how the Kenner dinosaurs had that little "JP" brand on them? Mattel's dinosaurs don't have that but they do have this cool little symbol (maybe some sort of DNA-like design?). Scan it with a smart phone and you can add new dinosaurs into the Jurassic Facts App. I borrow my wife's smart phone to use it (I don't have one) and it's kind of cool. It's a collecting/ trivia based game where you collect dinosaurs, learn facts, and take trivia contests. 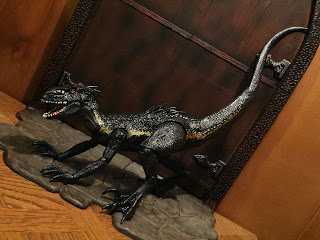 I've been incredibly impressed with Mattel's Jurassic Park/ Jurassic World offerings so far and the Indoraptor is perhaps the coolest. For $20 bucks you are getting a very well articulated, very large, and very fun toy. Heck, throw very creepy in the mix, too. While the human figures are fairly weak, the dinosaurs in this line are amazing and they seem to all go well together. Mattel has definitely released one of the best mass market movie based lines I can recall from recent memory and the Indoraptor is definitely the centerpiece. I can see him becoming a hot commodity after the film's release, so grab him now if you have an interest. He's a Great and a 1/2 dinosaur toy!

I haven't reviewed any other Indoraptor toys but I have reviewed a few other Jurassic World toys from Mattel, including:
Dilophosaurus
Dimorphodon
Posted by Barbecue17 at 6/04/2018