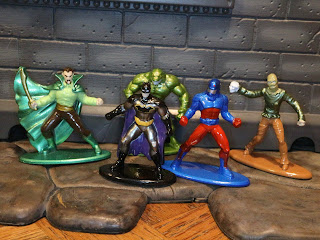 Today I'm looking at Pack B from the two series 4 5-packs released in the DC Nano Metalfigs line. While Pack A was alright, Pack B is a real winner. Not only does it have a Batman focused theme but it also features three completely new figures and two repaints. No straight repacks to be found here! Jada Toys is treating Batman's roster of villains quite well and even adds another member to the lineup of the DC Rebirth Justice League of America, Batman's personal pet project. Let's take a closer look at this new 5-pack after the break... 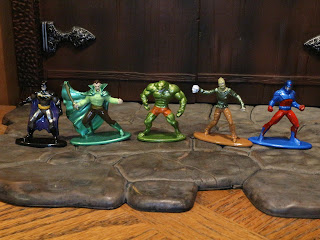 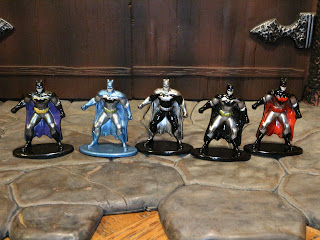 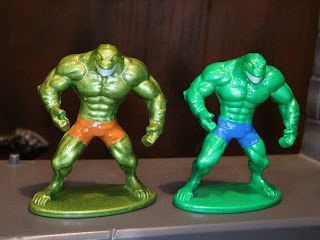 * The second comparison is between the new DC92 Killer Croc in this set and the original DC10 Killer Croc from series 1. I liked the original quite a bit but I'm loving this darker green, Arkham-orange wearing version as well. 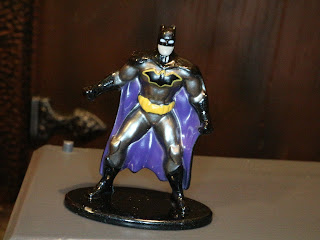 * While we've seen the sculpt before the paintwork on this figure is far better than any before it. I love the Rebirth costume with the purple cape and the yellow outline around the bat and, by gosh, Jada has delivered. The paintjob is clean and really makes the figure pop. 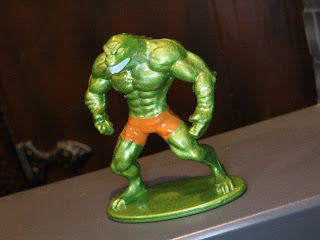 * Again, while we've seen this sculpt the new darker olive green skin tone with the orange shorts definitely brings to mind a version of Killer Croc who has escaped from Arkham. I'm liking this one a bit more than the first release due to the colors chosen. 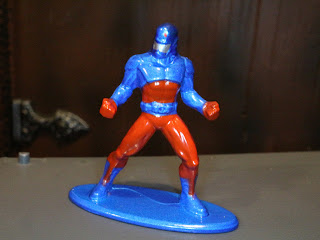 * So.. Do you think this is supposed to be Ray Palmer or Ryan Choi? I'm not sure either. Initially I was leaning towards this being Ryan's Rebirth costume but after looking at some pictures of Ray's Injustice costume I'm baffled. It's a cool looking Atom although it kind of reminds me of Cobra Commander, too. C'mon. If you just saw this guy from the torso up doesn't he look like the Sigma 6 version of Cobra Commander? 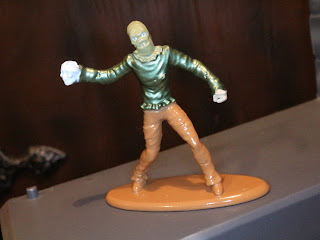 *Hey! I'm thrilled that we got the Scarecrow! I love Dr. Jonathan Crane and the Scarecrow was one of the first Batman villains I really was incredible fascinated by due to his terrifying visage. While he doesn't have a hat, he does have an excellent face sculpt, a cool pose, and he's carrying a skull. Frightening indeed! 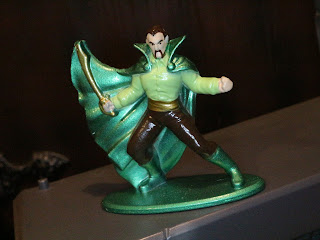 * Last, and certainly not least is the one, the only, Ra's Al Ghul! How cool that we've already gotten Ra's Al Ghul in this line, right? His colors are great, his sculpt is fantastic (I love the pose), and his design is a pretty good blend of multiple looks for the character. Nice job, Jads! Now give us Damian Wayne and Talia Al Ghul to go along with him. 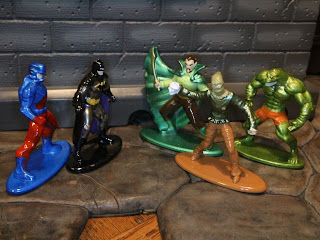 This is a fantastic set! We get three brand new characters and two repaints that are pretty solid figures. I'd love to see Jada Toys offer up more multipacks that feature all new stuff moving forward rather than forcing collectors to pick up doubles. Hopefully this is the wave of the future. Ra's and the Scarecrow are my favorites here but everything is slick. This is a Great and a 1/2 set and quite possibly the best $5 you could spend on DC/ Batman toys these days.

If you're a Ra's Al Gul fan check out my review of the DC Signature Series Ra's Al Ghul.

The only other action figures of the Atom I've reviewed have bee the Atom microfigure that was included with the Dark Knight Strikes Again version of the Flash figure and the Legends of Tomorrow Multiverse Atom.


Of course, you know I've reviewed so many Batman figures that he has his own action figure review archive. Check out the Dark Knight Archive for more reviews!