Something Has Survived: Velociraptor "Blue" (Battle Damage) from Jurassic World by Mattel 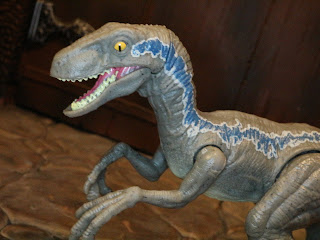 It's time for another Jurassic World review from Mattel's new line for Jurassic World: Fallen Kingdom! Today I'm checking out Velociraptor "Blue" as the packaging calls her. Blue is the most prominent of the four raptors Christ Pratt has trained in Jurassic World and the most unique looking thanks to her cool blue stripe. There are at least two versions of a standard adult Blue available right now that I'm aware of: This "Battle Damage" version and a standard "Attack Pack" version. The articulation is much more limited on the "Attack Pack" Blue, so I went for this one from the "Battle Damage" collection which I believe is limited to Wal-Mart. What is with stores getting full ranges of exclusive product these days? Target has the entire Legacy Collection as exclusives and Wal-Mart has the "Battle Damage" figures and I believe a few other products as exclusives as well. Blue is a prominent character (and one of the heroes) of Jurassic World and should play as equally an important role in Fallen Kingdom. Ready to check out one of the Blue figures available? Then join me after the break... 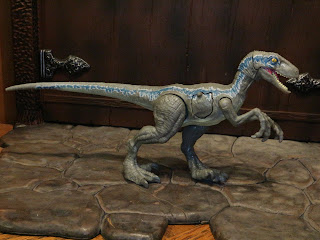 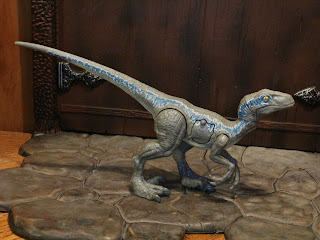 
* While Blue isn't packed with joints, the points of articulation she does have really do allow for some solid posing. The swivel/ hinge head and "shoulders," coupled with the legs, definitely give the figure lots of room to make different expressive poses. 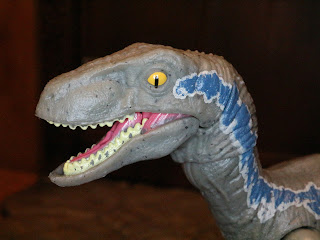 * The headsculpt is quite good. I love the opening jaw and the paintwork on the figure. Overall it is very neat and clean and really brings out Blue's personality. 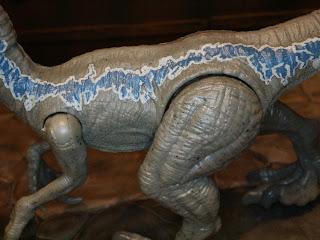 * The paintwork and the color of the plastic look fantastic. Blue seems to have plastic that has been molded with flicks of color mixed in, all of which is topped off with some slid shading on the belly and her distinctive blue stripe. Defnitely one of the nicest dino paintjobs in the line that I've seen. 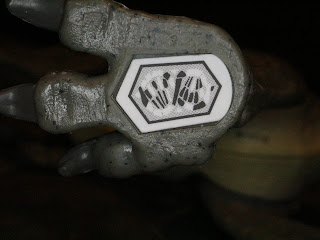 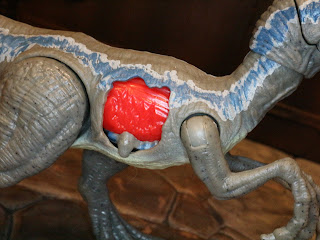 * Another call back to the classic Kenner Jurassic Park figures is the "Dino Damage!" on the side of the figure. Rather than have a removable flesh piece, the battle damage here is hidden under a spring loaded "flap" of skin. Press down on the "flap" and the skin retracts into the body. Pull it back up and it snaps back into place. The interior of the wound is bright red and fairly "kid friendly" but it is a cool play feature and it works very well. 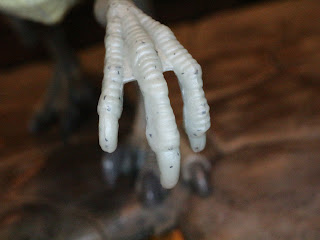 * Like with a couple of other dinosaurs in the line, Blue's claws are not painted. That seems like a pretty important paint app and it shouldn't have been overlooked. 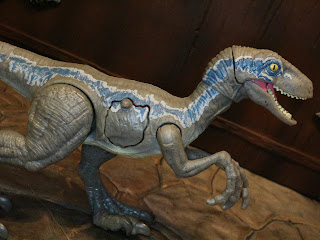 * While I like the play feature of the battle damage, a part of me definitely doesn't like the distinctive outline and the visible knob on the side of blue. It definitely detracts from what would have been a quite impressive looking action figure. It is fun and I like that Mattel is making a toyline that is designed to be played with, but perhaps this could have been tweaked just a bit more to make it a bit more aesthetically pleasing. 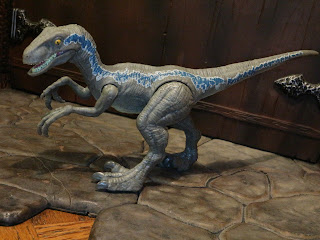 Velociraptor "Blue" (again, that's what the package calls her) is a Good and a 1/2 figure and another fun entry in Mattel's Jurassic Park World line. She's a character that I imagine kids who remember her from Jurassic World will be looking for and new fans will be searching for after seeing the next film. She's a great toy at a reasonable price. While I'd like to see some improvements here and there, I can't argue to much with what Mattel is doing here. This line seems to be doing insanely well as I'm noticing my local retailers are stocking and restocking the shelves over and over.


This is the first "Blue" I've reviewed. I have reviewed one other Velociraptor, though: The Jurassic World: Legacy Collection Velociraptor.