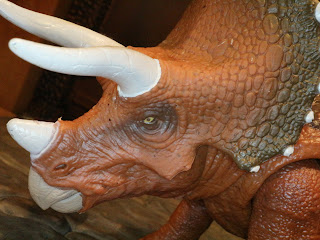 Jurassic World: Fallen Kingdom should now be in theaters everywhere and my guess is that the toys are really flying off of the shelves. I cannot remember the last time I saw a movie based toyline sell through at my local Wal-Mart and Target as many times as I've seen the Jurassic World toys from Mattel disappear from shelves and after kids get a chance to see the film this weekend I expect we'll see these sell even faster. Today I'm checking out the Roarivores Triceratops. Roarivores are the range of dinosaurs that include battery operated sound effects and some button activated action features. Wal-Mart put these on Roll Back last week so now instead of being around $15 or $16 dollars they sell for around $11 or $12. That's a great price and it sold me on picking up both the Allosaurus I reviewed yesterday and the Triceratops I'm reviewing today. Let's check out this classic dinosaur today, shall we? 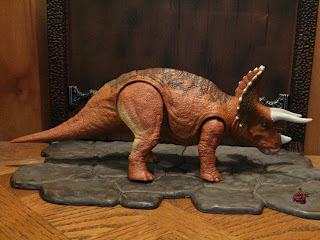 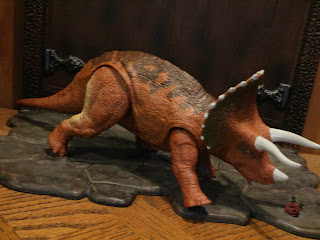 * While there aren't a ton of joints here, the balljointed hips on the Triceratops' legs and the balljointed head (although it does move via the action feature) make for a very playable toy. This is a really fun Triceratops and you can actually get some minor posing out of it thanks to the legs. 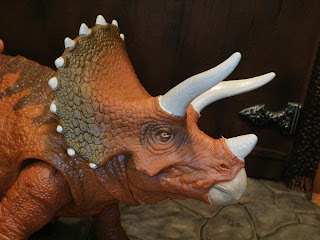 * The headsculpt is great. This is a smaller Triceratops but it still looks pretty mature and has some massive horns. Remember how all of the video games for the original Jurassic Park had you dodging Triceratops herds? Just having this figure in hand makes me want to have her just ram into other toys. Great sculpting and very, very nice paintwork. 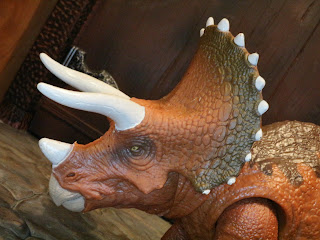 * The Triceratops has a head bashing action feature. Press a well concealed button on her back and her head moves around in a bashing motion. It works great and is quite a bit of fun. 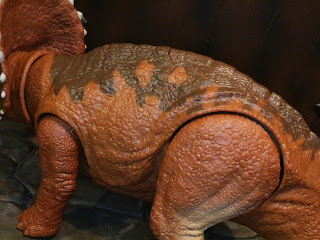 * The skin texture of the sculpt is extremely impressive and the paintwork adds some more color. I like the light tan on the back of the legs and the dark brown across the back. 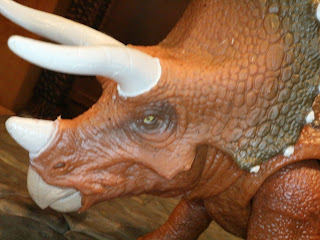 * Not only does the Triceratops has a moving head but she makes some noise when you push the button on her back, too. I notice three different roaring sound effects available and they're nice and loud. 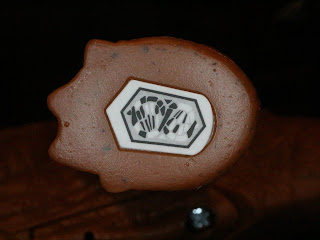 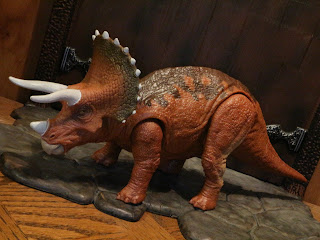 The Triceratops is a really well done dinosaur toy and feels like a pretty good deal considering you can pick it up for less than $16 dollars. Mattel has a nice range of dinosaurs available for the Jurassic World line but it is always good to see the classics: T.Rex, Triceratops, Stegosaurus, and Pteranodon. They really need to release a Brachiosaurus or Apatosaurus too, though. This is a Great and a 1/2 dino and a cool toy for Jurassic Park fans or dinosaur fans in general.

I've also reviewed a Triceratops in the Mini Dino Multipack.