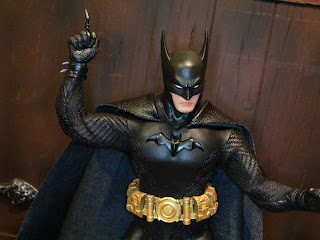 I've actually had the Mezco exclusive Batman Day 2017 Batman: Ascending Knight figure for over a month now but I held off on reviewing him. Initially it was because I wanted to review the standard version first and then I was busy reviewing Solo and Jurassic Park stuff. I'm not finally getting a chance to review this exclusive black and gold variant of Ascending Knight Batman and I'll just go ahead and say that I really do think I prefer this one to the standard. I like the standard figure (I gave it an Epic rating) but the black and gold color scheme just works really, really well here. Since this figure is really just a color variant I'm reusing my review of the basic figure here with all new pictures. For those places where the paint scheme is different, I'm including new thoughts and comments in italics! That way you can just check out the original review and then skim this one if you'd like. Let's crack this one open and check it out after the break... 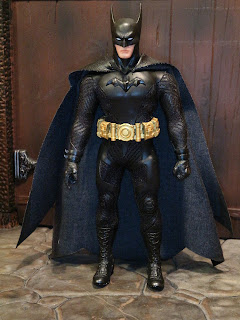 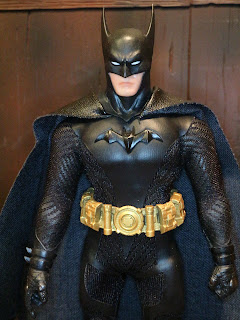 * The biggest difference on this figure is the color scheme. While the standard version features a grey bodysuit with black accoutrements, this one is all black. When I see a black batsuit with a gold belt, the first thing that comes to my mind is Michael Keaton's costume from Tim Burton's 1989 Batman film. Considering that this is Mezco's take on Batman during his early years, I think the Keaton connection is fitting (maybe even Batman Begins as well) since Begins, Batman 1989, Year One, and the various early comics all seem to depict a more primitive version of the caped crusader as he is just beginning to wage his war on crime. The costume is quite impressive with differing materials and that bright gold belt adding some visual diversity to the overall design. 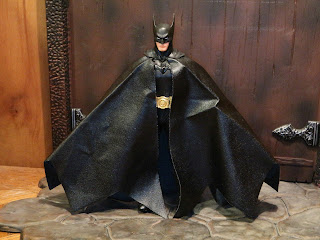 * The same as the standard Ascending Knight, the cape is made from a pleather like material that drapes pretty realistically across the figure. While it isn't as nice as the amazing capes of the Dark Knight Returns Batman figures, it does look more like a heavy, leather cape. It can both drape behind the figure's shoulders or over them, absolutely bringing to mind the cover of Detective Comics #31. 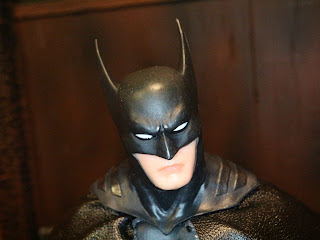 * Just like the standard Ascending Knight Batman, the headsculpt is probably the piece that signals this the most as being a First Appearance Batman and I think Mezco knocked this one out of the park. It's definitely a different look for a modern Batman figure, but I like it. The "ears" are insanely pointy and look pretty menacing. The white eyes are perfect, too. 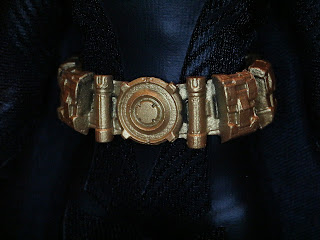 * The utility belt is also a very cool detail. It really reminds me of the Keaton utility belt, although I'm sure other fans will see other bits of inspiration, too. The detailed sculpting and gold color really add a nice something extra to the overall design. It is removable via a hidden peg underneath a pouch in the rear, just for your information. The gold color on this version seems a bit brighter and less "weathered" than the standard version, helping it to contrast more with the all black suit. 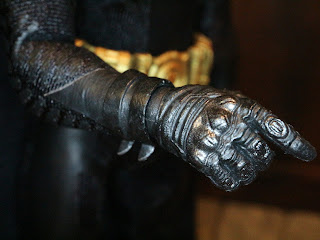 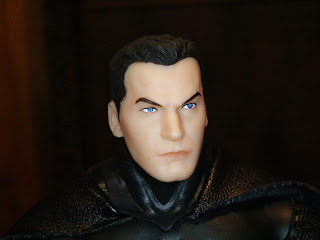 * All versions of Ascending Knight Batman come with one alternate headsculpt: Bruce Wayne! How freaking cool! This is a great "composite" of Bruce as it looks like many of his comic appearances as well as having traces of some of the actors who have played the character over the years. Brilliant! He has a very piercing gaze, doesn't he? 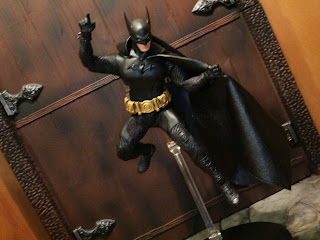 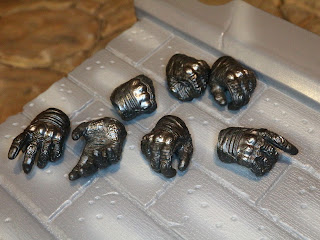 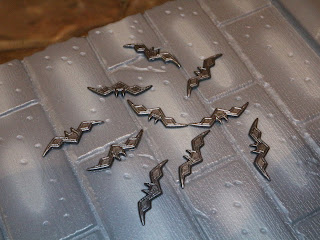 * Like the standard figure, the Mezco exclusive Ascending Knight Batman comes with ten batarangs. Ten. That's crazy! He doesn't have any way to hold them so I have no idea what the heck he's going to do with all of them, but they're pretty slick looking pieces. Keep one or two for this figure and give some to all of the Batman figures Mattel and DC Collectibles have released over the years with no batarangs. 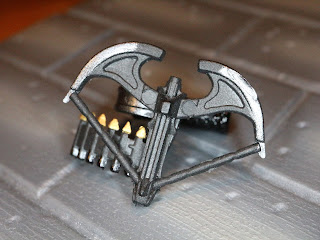 * Showing off that this is an early in his career version of Batman, some of the accessories are decidedly more low-tech than you might expect. I love this small crossbow that fires tranquilizer darts. It even has an attached clip. It feels like a great fit for Batman and would have seemed like a high-tech gadget in the past. It reminds me of the Kenner Batman Crossbow from the Dark Knight Collection that I had as a kid, too. While the darts are silver on the standard version, the Mezco exclusive has bronze tipped darts. 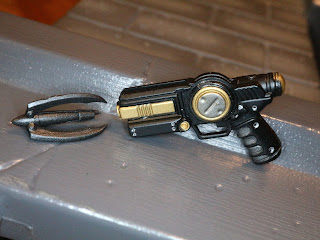 * Batman includes his grapnel gun which has now become one of his most ubiquitous gadgets. The sculpt and paintwork is incredible and it comes with a folded up piton that fits in the barrel for when the gun is in storage. This version features a much more intricate paint job with more bronze/ gold highlights and a black piton rather than the silver piton of the standard version. 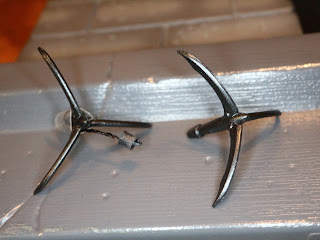 * The grapnel gun has two other hooks as well. There is a grappling hook with the arms spread out (for if Batman is preparing to fire the gun) and a hook with a string for actually posing the figure when firing the gun. The hook definitely won't hold the figure (if it were metal, though... maybe in the future, Mezco?) but it looks cool and you should be able to get some cool poses out if it. These hooks are also cast in all black, unlike the silver hooks of the standard release. 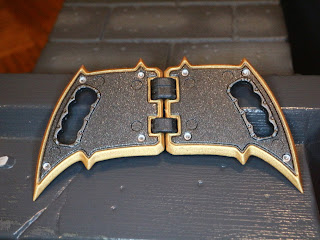 * One of the most peculiar accessories included with AK Batman is the "Heavy Assault Bat Brick." What is it? It seems to be a multi-purpose tool that can be used as a melee weapon for close quarters combat, as a shield for deflecting blows and/ or projectiles, and folded in half so Batman can slide down cables. It it hinged in the middle and has grips on both sides for Batman to wield it. While the standard release has silver edges the Mezco exclusive has bronze edges. It's pretty sharp looking (no pun intended)! 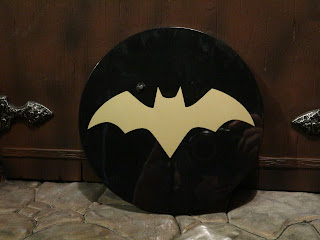 * Like the other One:12 Collective figures, Ascending Knight Batman features a round display base featuring his unique Batman logo. The logo is emblazoned on the base and an off-centered peg helps to keep the figure nice and secure when standing up. While the standard figure has a gray base with a black bat the Mezco exclusive  has a black base with a gold bat. 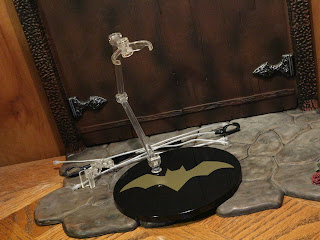 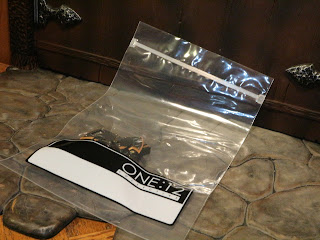 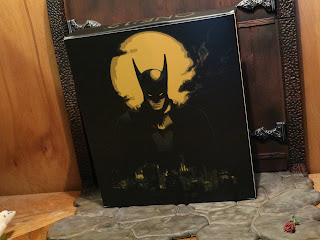 * It's just an image on the back of the box but, dang, does that look sweet. I love the black and gold picture of Ascending Knight Batman here. Imagine if this were a teaser poster for an upcoming Batman film. That would be amazing! 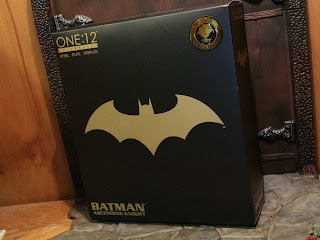 * While the Mezco One:12 Collective figures have typically come with nice heavy 5-panel storage boxes that are easily accessible to put figures and accessories in, the Ascending Knight Batman comes in a smaller box that feels very light and flimsy. I love the look and feel of the standard boxes and I'm frustrated that Mezco seems to be doing away with this tradition. 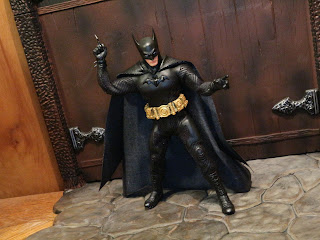 Interestingly, not only do I like the look of this costume better than that of the original figure but it also manages to solve the two problems I had with the basic figure: The lack of trunks and the missing purple hands. This costume is so different in color than the first appearance batsuit that the lack of purple gloves isn't even noticed, nor are trunks needed. It's a great sleek, clean, imposing look that draws the best elements from multiple "early" Batman stories. I'm not planning on picking up any more Ascending Knight Batman figures as I'm pretty sure this one is my favorite. Epic.

For more Batman reviews, check out the Dark Knight Gallery where I have dozens posted.