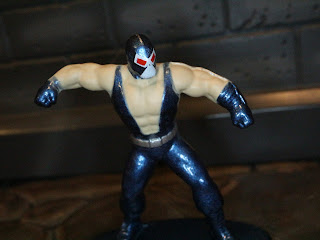 Today I'm checking out another character who is new to the Nano Metalfigs line: Bane! First appearing in January 1993, Bane is a character who has really grown in popularity over the past 25 years. I love Bane and I feel a special affinity for the character as he's a Batman villain who I remember coming on to the scene and whose popularity I got the chance to witness first hand. I remember the firs Bane action figure being released in the Batman: The Animated Series toyline and seeing the character in the trailer for a ...........Batman movie that I seem to have repressed (Editor's Note: Barbecue17 will never mention the name of a 1997 Batman film. Never.). Anyways, he's a major Batman antagonist and I love seeing him in this line. I really hope Jada Toys continues to put out more comic based releases as they all turn out great. Let's check out Bane after the break... 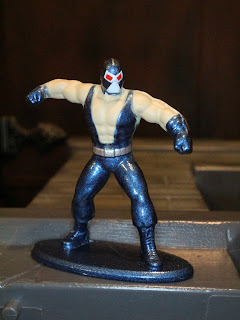 * Bane really isn't that much taller than a standard figure but his wide stance and muscular body definitely make him seem larger. He looks jacked, just like Bane should be. I'm digging the classic look Jada Toys went with here. It might be tough to tell from the pictures but his outfit is actually metallic blue, not black. Check out the visible laces on his combat boot, too. Nice! 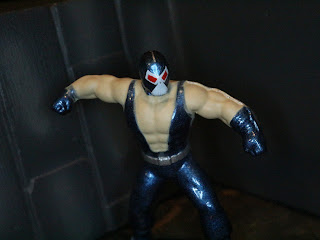 * Another think that can be tough to see (because I didn't take a proper picture) is that Bane has the tube for his venom running from the back of his head to his wrist device. The cable is sculpted and neatly painted. 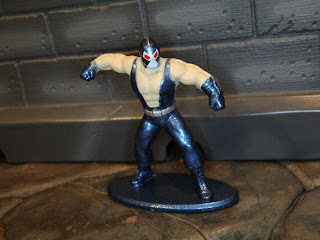 Bane is another hit in series 4, a set that has really been highly impressive. Bane is another Great release in this series and adds another awesome villain to Batman's gallery of enemies. With this many villains, Jada Toys needs to crank out more members of the Batfamily, don't they? It'd also be great to see more non-Batman characters in the line. Still, this is quite possibly my favorite currently running DC line due to the varied released we're getting. I hope the good stuff continues. I have two more single packed series 4 releases left as well as two 5-packs, reviews for which are coming soon!

I've reviewed a few other Bane items including the Arkham Origins Bane from DC Collectibles and Lethal Impact Bane from Kenner's Legends of the Dark Knight line.