Road to Solo: 2-1B Mini Head from Micro Machines: Star Wars by Galoob 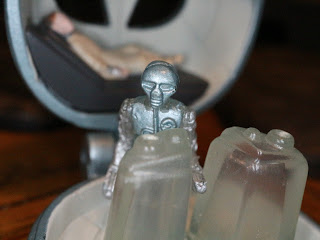 I've recently added quite a few Galoob Micro Machine pieces to my collection (mostly Star Wars) so I hope you dig retro reviews of micro toys that you can't find in store anymore! Today I'm checking out another set from the second series of Mini Heads that were only available in the United States via a 1998 Pizza Hutt promotion. Today I'm checking out 2-1B, the medical droid who serves Luke both at the beginning of The Empire Strikes Back after his Wampa attack and at the end after losing a hand to Darth Vader. In late 1995 Galoob offered a set of various droids under the Micro Machines banner although the figures were more in scale with the Action Fleet line. 2-1B was included there but was never included in the Micro Machines series as a microfigure in any other way, making this set greatly desired. This Mini Head was included as both one of the single packed Pizza Hut exclusives and in the internationally offered set VI of the Mini Heads alongside Weequay and the Royal Guard. Let's take a look at 2-1B after the break... 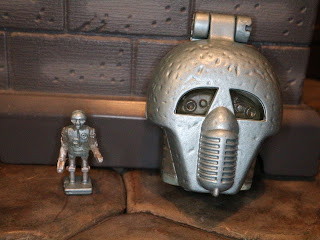 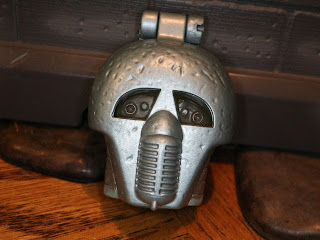 * 2-1B has a very interesting face shape and Galoob did a great job of capturing it in plastic. I like the texture on the head quite a bit as it appears very faithful to the film prop. I'm also loving the detail on the vocoder and the translucent eyes. Galoob gave this mini head a great likeness to the 2-1B from the film. 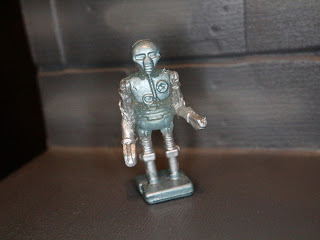 * The 2-1B microfigure is easily one of the most impressively sculpted microfigures in the line. The colors, the technological details, and the use of some translucent plastic really make for an excellent droid to fix up your other figures. Interestingly, he has a square shaped base, a rather unusual feature for a Micro Machine microfigure. 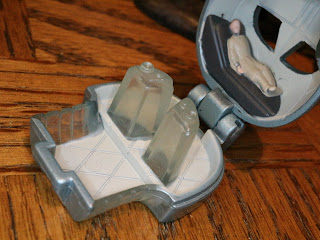 * The 2-1B Mini Head opens up into an interesting miniature diorama. The base of the set is clearly 2-1B's medical bay aboard the Redemption, the medical frigate from the end of The Empire Strikes Back. The floor texture looks pretty cool and "modern" and I'm assuming the little translucent podiums (they double as the closed head's eyes) are Galoob's take on 2-1B's work stations. 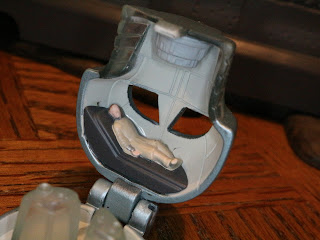 * There's a little Luke Skywalker on the back of the set and he's clad in the medical robes he wears at the end of Episode V. If you look at his right arm carefully you can see that there is a little silver patch which is intended to represent the panel on Luke's new forearm which 2-1B used to calibrate the mechanical hand. Pretty cool little detail, huh? 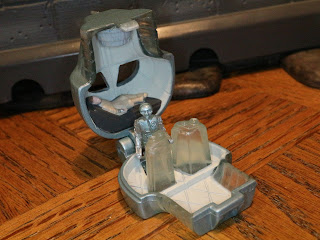 The Mini Heads themselves definitely didn't offer a lot of play value but they did offer up the chance to have some cool extra figures to add in to the other sets. While they're now some of my favorite little collectibles just due to their sheer novelty, at the time they definitely didn't seem to find a huge audience. This is a Good and a 1/2 set and offers up the chance to have an in-scale 2-1B to the Micro Machines line. The interior isn't terribly exciting, but at least it offers a recognizable scene to go along with the figure.

If you're looking for more Micro Machines: Star Wars releases by Galoob, check out the following: