Minifigure Review: Pack B from M.U.S.C.L.E.: The Worst by Super7 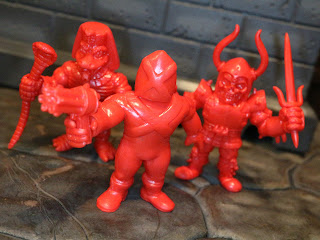 I just reviewed Pack A of the red The Worst M.U.S.C.L.E. figures and now it's time to check out Pack B. Featuring the evil snake mummy Snake Tut, the undead savage skeletal warrior Black Falcon, and the mysterious and menacing X-2 (The Unknown), Pack B features some pretty cool character designs based on Super7's The Worst line of Kenner styled action figures. I'd really love to see Super7 release a new batch of characters in this line as it has been of my favorite new intellectual properties in quite a few years. There is just something to be said about a super-villain team of the worst of the worst, you know? Let's check out these special Valentine's Day red minifigures after the break... 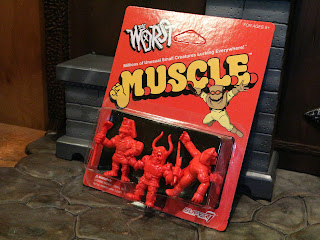 * I don't usually leave my figures in the packaging long enough to take an "in-package" picture but here is one for the red editions of The Worst Pack B. 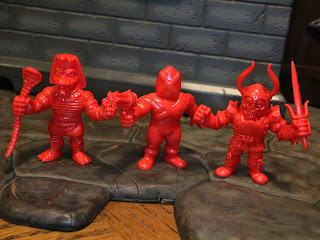 * Since these are simply different colorways of previously released figures I'm not going to spend too much time talking about them. For the full details check out my review of the previously released purple set of these three misfits. These are with a doubt some of the best minifigures on the market and quite possibly the best minifigures that Super7 has released. Not only do they have sharp sculpts and miniature weapons but the plastic feel is great. They feel more like M.U.S.C.L.E. than pretty much any other set. 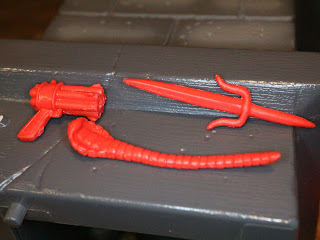 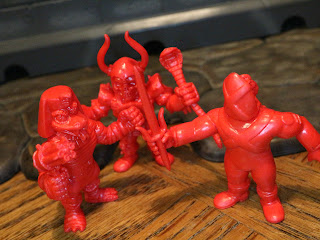 I am an absolute sucker for Super7's M.U.S.C.L.E. revival and for The Worst so the fact that these two are blended together makes me a very, very happy pumpkin head man. I don't like the red as well as the purple (it is a bit more reflective and it makes taking pictures harder) but in person it looks superb. This is still an Epic set of minis and will quite possibly be the best $6 dollars you spend all year. Well, I kind of like Pack A better myself. You know what? If you dig minis, save yourself the heartache and buy both sets. 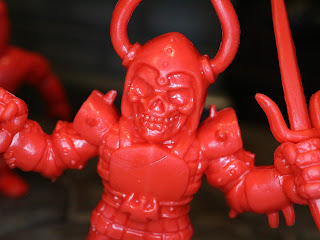 For more M.U.S.C.L.E. reviews, check out the following: