Adding to the Archives: Who Should be the Star of April's Spotlight? 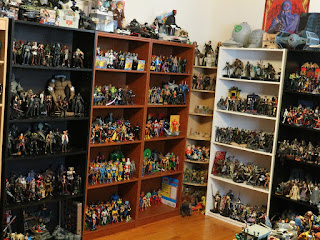 For March I've been covering some older Han Solo releases to help us get collectively pumped for the upcoming Solo: A Star Wars Story and to add more Han Solo themed reviews for the archives. I've decided to keep this as a monthly trend and so for April 2018, I'll hold a vote: Simply leave a comment below naming which of the following characters you'd like to see have a month long review series on ActionFigureBarbecue.com!

Captain America- With the impending release of Avengers: Infinity War, let's check out some previous Captain America figures and give Steve Rogers the tribute he deserves!


Wonder Woman- I've reviewed a ton of Wonder Woman figures over the past year or so and she's so close to having enough reviews on the site for me to give her her own personal review archive. Let's get her over the top, shall we?

Lara Croft- With the new Tomb Raider just released (I haven't seen it yet, though, and I haven't heard great things) this is still a great time to check out Lara Croft's long action figure history. Tomb Raider came out in 1996 when I was in Middle School and I've always had an affinity for Ms. Croft.

Lando Calrissian- Let's throw Lando in here, too. You know you like scoundrels! Plus, he's in Solo!