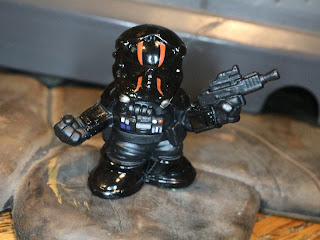 Here's the fourth of the Star Wars: Micro Force microfigures I picked up a couple of weeks ago: The TIE Fighter Pilot Elite. This elite pilot of the First Order has a pretty snazzy costume and just looks pretty cool. I've reviewed the Black Series version of the TIE Fighter Pilot (along with the massive Special Forces TIE Fighter he was packaged with) so now we're going with something in a much smaller scale. This is another one of the brand new sculpts from Series 2, so let's check him out after the break... 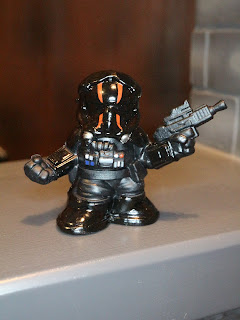 
* This guy looks really, really cool. I love the pose, the extreme level of detail on the SE-44C pistol, and the different types of black paint used to differentiate the suit from the armored bits. This is an insanely impressive microfigure! 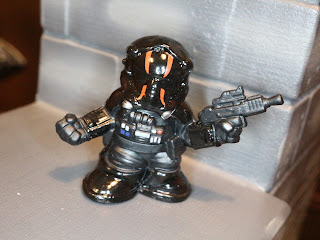 The TIE Fighter Pilot Elite might just be one of the best figures in Star Wars: Micro Force that I've picked up. The sculpted and paint details are amazing while the pose is quite interesting. I love this guy. He's definitely an interesting choice for a Micro Figure considering he's one of only six characters from The Force Awakens in this series, but he works and works well. A Great and a 1/2 microfigure!