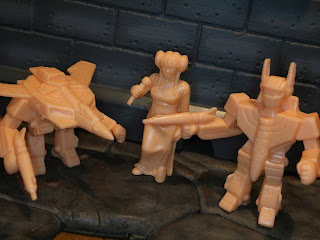 I'm slowly making my way through all of the new M.U.S.C.L.E. sets Super7 has dropped over the past month or two. I'm thrilled to get so many new M.U.S.C.L.E. figures at once, particularly with how much the quality has really jumped up with the new releases. Today I'm checking out Pack C from Robotech with features the VF-1S, a Veritech Fighter in Guardian mode, and Lynn Minmei. Each of the four packs for this series includes three vehicles/ mechs/ ships and one standard figure, so you get a nice mixture of little minifigures. Let's take a quick peek at this trifecta of mechanized minifigures after the break... 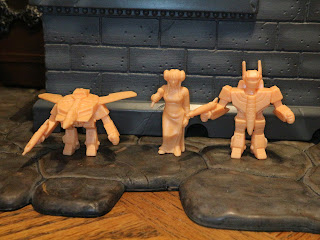 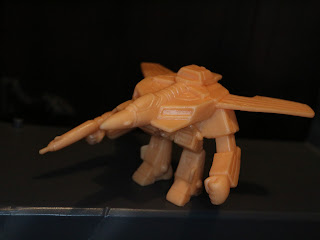 First up is a Veritech Fighter in Guardian mode. The VERITech fighters (Variable Engineering and Robotics Engineering Technology, FYI) can transform from a standard looking fighter jet, called Fighter Mode, into a bipedal mech called Battloid Mode. The in-between step is called Guardian mode and is often used to move quickly while still engaged in combat. This is a very cool looking mini as it has the jet wings while still having legs, arms, and a gun pod. 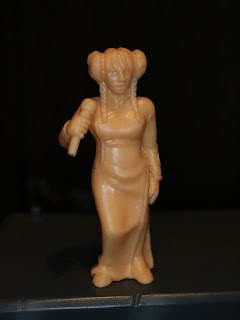 I'm only about four episodes into Robotech so I haven't seen Minmei dressed up like this yet (apparently she becomes a famous entertainer later on) but I've certainly been introduced to the character. I love the overall sculpt of this figure, particularly the work on the folds in the dress and the cool hair, but I'm definitely a little weirded out by the face. Super7 seems to be trying to incorporate an element of the "eyeless" M.U.S.C.L.E. style into these and while it worked with Rick Hunter and Roy Fokker, it definitely does not work for Minmei. I about 80% love this figure; she just needed a better (maybe just simpler?) headsculpt. 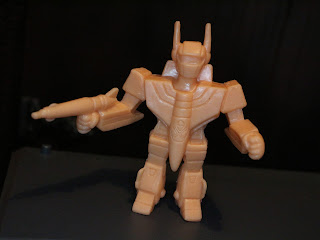 The VF-1S is another Valkyrie Fighter and is probably supposed to represent Roy Fokker's Skull One. It's a cool little mini that pretty nicely replicates a M.U.S.C.L.E.ized version of the Battloid seen on the show. He stands up really well and has some decent detail as well as a very clean, neat look. 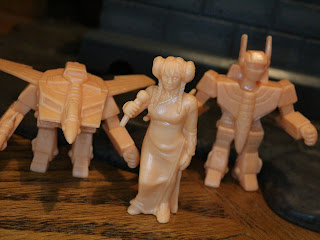 This is another Great set that meets all of my minifigure needs: The plastic quality is good (not too rubbery), it fairly accurately captures the "M.U.S.C.L.E. pink" color of the original toyline, the sculpts have crisp, clean detail, and it only costs $6 for the 3-pack. Anytime I can get minifigures in this style for $2 bucks I'm happy. I do wish Minmei's face looked a bit more...normal but otherwise I'm a happy camper.


If you're looking for more Veritech Valkyries, I've also reviewed the VF-1A from Robotech M.U.S.C.L.E. Pack A and the VF-1J from Pack B.