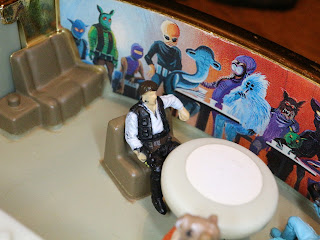 While the release of Solo: A Star Wars Story is still a couple of months away, I've been wanting to do a series of reviews on some cool Han Solo themed merchandise from my collection. Since one of my absolute favorite Star Wars toylines of all time is Galoob's Micro Machines line I figured I would start out with a review of the C-3PO/ Cantin Transforming Action Set from 1994. Transforming from a bust of the beloved golden protocol droid into a playset of the Mos Eisley Cantina, this set features the place where the audience is introduced to Han Solo. Plus, it features a pretty fun way to reenact Han Solo's infamous encounter with Greedo. When I think of Han Solo, I think of him chilling out in Chalmun's Cantina, so this is the first review in this March 2018 miniseries dedicated to Han Solo. This is my original childhood set and while it was released in 1994 I picked it up sometime during the Fall of 1995 when I was just getting into Star Wars. I still love it and it has been a persistent part of my collection for nearly 23 years now. Let's take a look at it after the break... 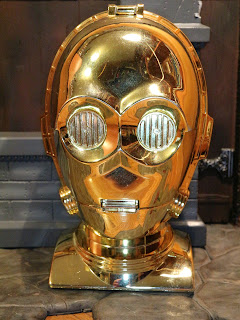 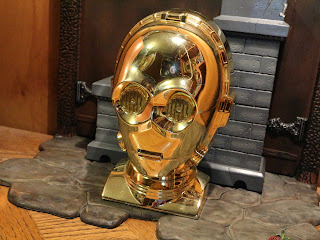 * The Transforming Action Sets are some of my favorite Star Wars collectibles ever because not only are they cool playsets but they're also incredibly cool mini busts. While he might be a bit worn and in need of a good oil bath, this is still a very cool C-3PO likeness. The vac-metallized gold plating is excellent and still looks impressive after all these years. I love how the lever to "open" the set is cleverly disguised as C-3PO's vocoder, too. Nice touch. 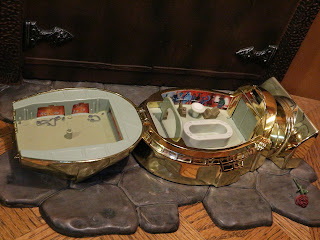 * C-3PO, unlike most of the other transforming head sets, lays flay when it opens up (most of the other heads stand up vertically with the face folding down to serve as the ground level of the set). The set features both Docking Bay 94 and Chalmun's Cantina as two separate environments. 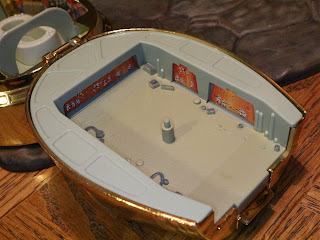 * Docking Bay 94 (the packaging calls it the "Space vehicle docking bay") is a simple open area with three walls and a post for storing the Millennium Falcon (or any other vehicle, really). While later sets were often more cramped these earlier sets offered a lot of room to "play" with the microfigures. 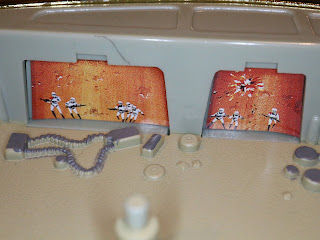 * The docking bay is surrounded by these murals showing Imperial Stormtroopers and Sandtroopers storming the docking bay. I love the stickers Galoob used on some of these early sets and these ones are quite lovely for capturing such a small detail as troops overrunning the bay. Also, the various sculpted elements of junk strewn about add a nice touch to the environment. 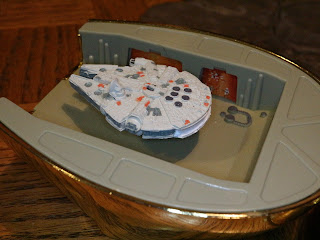 * And here is a picture of the Millennium Falcon just sitting right on top of the display post inside Docking Bay 94. 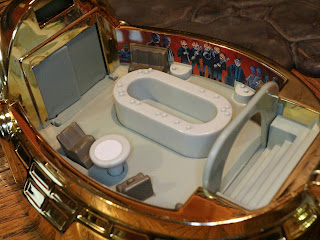 * Make sure to leave your droids in good hands before you venture into the cantina! The cantina is another cool and fairly spacious environment that was fun to populate with random Micro Machines microfigures. 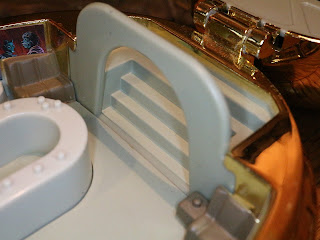 * The stairway coming down into Chalmun's Cantina is nice and gives you a way to either access Docking Bay 94 or the means to reenact Luke and Obi-Wan entering the cantina. 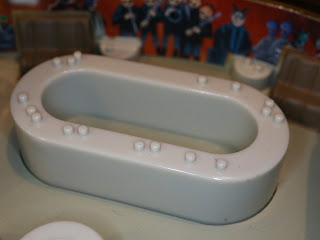 * The round bar is certainly simpler than that shown in A New Hope but it gets the point across and makes for a pretty cool centerpiece for the playset. I like the little drinks sculpted onto the counter. 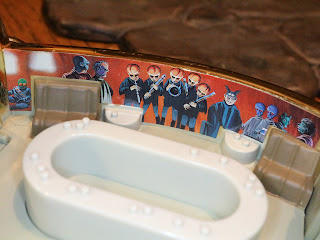 * On one side of the set is another beautiful sticker featuring images of a variety of Cantina favorites: Ponda Baba, Dr. Evazan, Figrin D'an and the Modal Nodes, Kardue'sai'Malloc/ Labria, some Duros, a Rodian, and I think Lak Sivrak. Lots of boots and tables, too. 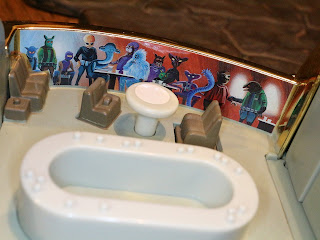 * Another sticker on this side shows off even more Cantina patrons! 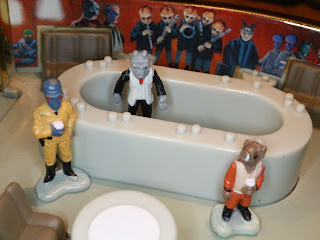 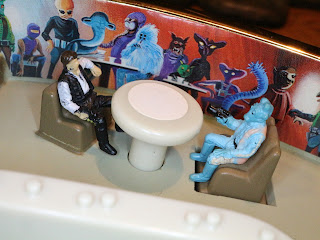 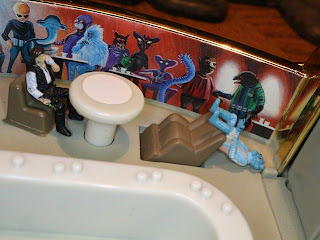 * Press down on the table and Greedo's chair springs back, causing the microfigure to go flying. This is without a doubt one of my favorite Star Wars toys ever. It's also pre-Special Edition so Han doesn't jerk or do anything; he just fries poor Greedo. 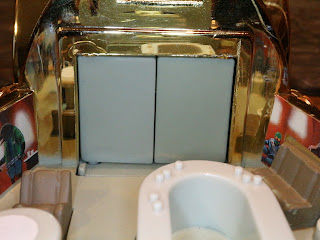 * That sure is an ominous door on the back of the Cantina. I wonder what it is for? 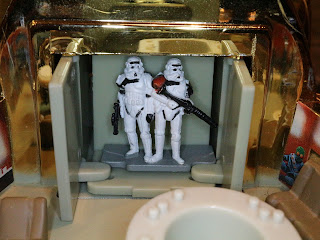 * Push the lever and a pair of Sandtroopers pop in to cause some trouble. Or try and stop trouble. How should we feel about Sandtroopers in a place like Chalmun's Cantina again? 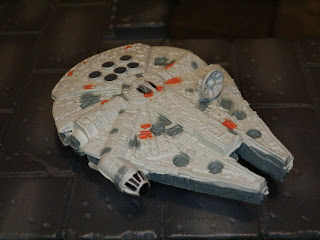 Here's a closer look at the included Millennium Falcon Micro Machine. It's an excellent little model with some very impressive paint detail. The sculpting is also intricate as heck as you can see all of the little details all over the ship. While the packaging calls them "Stromtroopers" we all know that these two guys are Sandtroopers. A Sandtrooper sergeant and a squad leader, to be more specific. This was an unusual microfigure as it featured two separate characters together on one base. For the scale the paintwork and sculpted detail was pretty impressive, no? 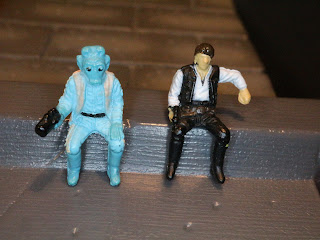 Greedo and Han Solo both look pretty impressive, too. I love how Han has his left arm out as if he's subtly distracting Greedo while the right arm is reaching down for his blaster pistol. While Han Solo was released in this same outfit as another microfigure in the Death Star playset, it took a few years for us to get a normal Greedo figure, so the permanently seated aspect of the figure was a bit frustrating. 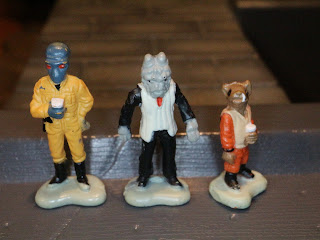 The set came with three alien denizens to chill out: The Duros (Banis Keeg), the Gotal (Feltipern Trevagg), and the Chadra-Fan (the hard drinking Kabe). These little guys and girl are awesome. Banis Keeg and Kabe were always random patrons while Feltipern Trevagg was the bartender in Wuher's absence. Of course, back then they were just Duros, Gotal, and Chadra-Fan because we didn't know any better. 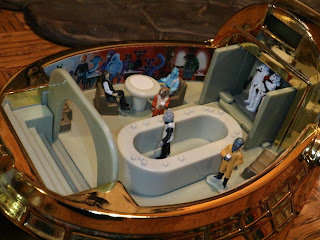 I have so much love and emotional attachment to this set that it isn't even air for me to rate it. It's Epic, though. The transforming action sets were so creative and Galoob always did fun things with the Star Wars license. While Han Solo is only a small part of this set, the fact that you get to reenact one of his classic encounters in the place where we are introduced to him definitely makes this a worthy entry for my Han Solo retrospective. Plus, you get his ship. And lots of alien goodness.

For more C-3PO check out the Black Series classic version and the Black Series Resistance Base version, my daughter's Hero Mashers C-3PO,  the Galoob's Classic Characters (2nd Edition) set which he was included in, the Micro Force series 1 C-3PO, and the POP! C-3PO [Unfinished].

These are the first figures of Kabe, Feltipern Trevagg, and Banis Keeg that I've reviewed on here.

For more Star Wars Micro Machines from Galoob, check out the following: