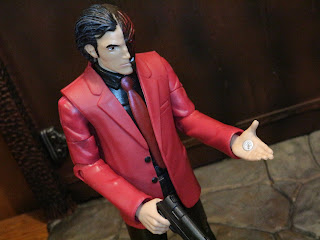 It has been awhile since Mattel last released a Two-Face figure but we finally have a new, updated one as part of the DC Comics Multiverse line. Lately, Two-Face's biggest role in DC Comics was in the first story arc in Scott Snyder's now discontinued All-Star Batman (which has nothing to with the the absolutely bonkers Frank Miller/ Jim Lee All-Star Batman). Based on the artwork of John Romita Jr, this version of Two-Face sports a snazzy red and black outfit and a red-scarred face that definitely makes me think of Tommy Lee Jones' sometimes great/ often times terrible portrayal of Harvey Dent in Batman Forever. I've already reviewed the other four figures in this series (links are at the end of the review) so Two-Face wraps this series up. Well, other than the Clayface Collect & Connect figure which I'll definitely be reviewing. Let's check out this quite current update of Harvey Dent, AKA Two-Face, after the break... 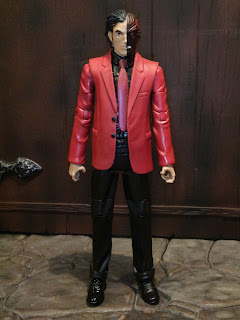 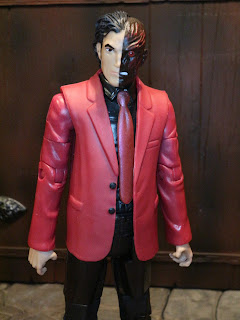 * While Two-Face reuses most of the suited body that has been around for quite a while, I still find that I don't mind. Two-Face is sporting an open blazer rather than a buttoned look like most previous figures. The burgundy and black look of the figure is quite sharp and definitely stands out on the shelf. The blazer is a separate piece (well, the main body at least) as is the tie, giving the figure a more dimensional appearance. Harvey definitely looks quite slick here, that's for sure. 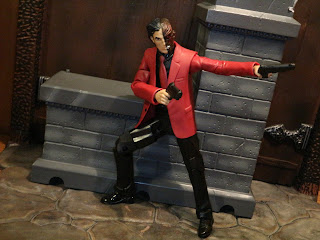 * Considering that you typically don't think of people wearing suits as being very action oriented characters (other than James Bond. And John Wick. And Austin Powers. OK, maybe I'm wrong.), this suited body actually works pretty well. It's a bit older but it still does the trick. I'm quite happy with it as it allows for some decent poses and it feels very solid and sturdy. 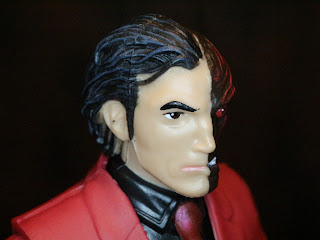 * The right side of Harvey Dent's face is left unscarred and shows the famously handsome Harvey with some longer, slicked back hair. It's not a bad headsculpt. Well, half of one, anyways. 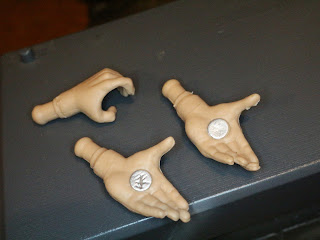 * One of the coolest features of this figure are the three interchangeable left hands. There is a standard pistol grip as well as two hands holding coins: One with a scarred coin and one with a normal coin. These swap out easily and, like the other figures with removable hands in this series, they feel very sturdy and durable. The presence of extra hands in this series of figures definitely shows Mattel making some big progress and it is definitely not unappreciated! 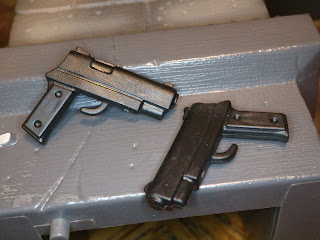 * Two-Face includes two pistols. These are the same as the pistol included with last year's Joker figure from The Dark Knight Returns but they look fine, fit in the figures hands, and have a pretty cool sculpt. Plus, you get two! 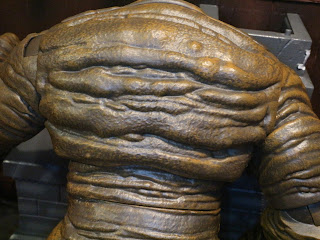 * Two-Face includes two pieces that snap together to form the torso of Clayface. This guy is a pretty large Build-a-Figure Collect & Connect figure and I'm anxious to finally reviews him! 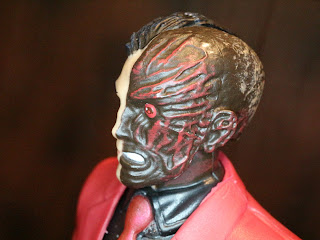 * The left side isn't as impressive as the right but it does have some decent paintwork that try to show off a few gruesome details. Unfortunately, the sculpt looks fairly soft and the paint details don't work as well as you would hope. * I'm also not really liking how the headsculpt looks when merged together. I know that Two-Face is supposed to have a disjointed appearance but something about the way these two halves match up just doesn't look right to me. The separation seems almost too clean perfect rather than being natural looking and organic. 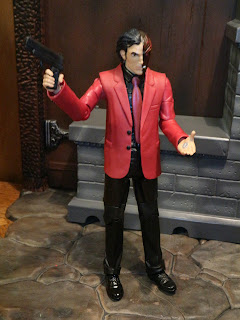 While I'm not sold on the headsculpt, Two-Face is definitely a worth addition to the DC Comics Multiverse line. Batman villains are always great figures to pick up and Two-Face is a character that we haven't seen on one of  Mattel's 6 inch DC lines for a few years. He has some great accessories (I love the interchangeable hands with different coins) and a very appealing color scheme. Two-Face is a Great figure and I imagine he'll be one of the most desirable figures in this series, probably right behind Batwoman.