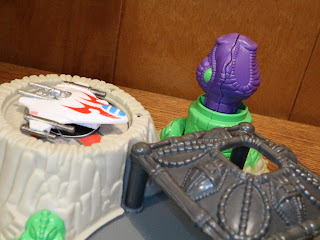 Around 1993, well into the Micro Machines craze but before Galoob moved into the licensed world of Star Wars Micro Machines, Galoob attempted to create their own in-house sci-fi line called Galaxy Voyagers. While the modest line is thought of fondly by those who remember it Galaxy Voyagers definitely didn't enjoy the success of other lines like Galoob's Star Wars, Star Trek, or generic military offerings. With only nine vehicle collections and three playsets the line isn't terribly expansive although some pieces can be tricky to find. One of the easier pieces to find is the only playset from the series I had as a kid: The Alien Pitfall! I recently picked this one up as my original was sold at some point during my childhood, probably around when I purged my military Micro Machines too. What a shame! Fortunately, eBay allows us to rectify the follies of our youth and I'm now a 34 year old man writing about the Alien Pitfall playset. I loved this one as a kid as I was always a fan of trap based playsets (such as the Horde's  Fright Zone or Swamp Thing's Swamp Trap. Let's take a closer look at the Alien Pitfall after the break... 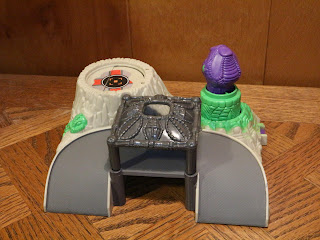 Dimensions: About 6 inches by 6 inches 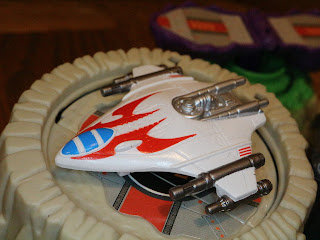 * First up is the Tr-Star Phaser Cannon, a small starfighter that was a repaint of a vehicle from Collection VI. The white and red paintjob is realyl flasy on this vehicle, though, and makes for an awesome looking spacecraft. I love the cannons and the massive engines on this one! 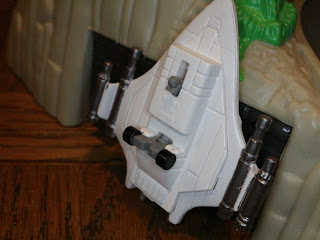 * The Tri-Star Phaser Cannon has hinged landing wheels that fold down much like a common aircraft. 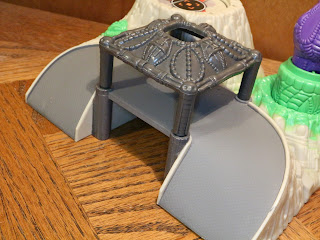 * The front of the playset features a ramp that allows vehicles to roll up the hill and take refuge under the strange alien structure at the top. A few of the vehicle collections included wheeled vehicles so this worked great with those Micro Machines. The covered structure has a very cool, almost organic looking pattern to it. 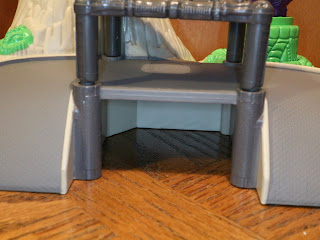 * Underneath the ramp is a small hangar to store a ship or a vehicle in for safety. 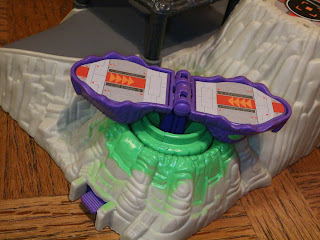 * Around the back right of the Alien Pitfall is perhaps the feature that the set is named after: A mysterious purple landing strip that seems to be growing out of a green topped crater. 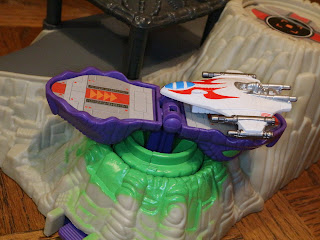 * The mysterious landing strip looks safe enough, so you can understand why your ships may decide to land their vessels there. Wait a minute... do you hear something? Like something breathing? 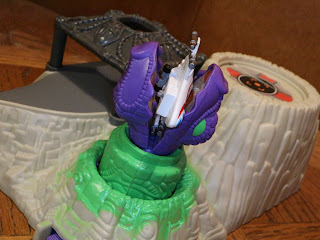 * Oh no! It's alive! Push a switch on the side of the playset and the landing strip snaps together, revealing that it is actually a purple, snakelike alien creature. This is a cool feature although, I must admit, it doesn't work perfectly. I would usually say that the spring mechanism has probably worn out over the years (although I purchased this set new in a box) but I seem to remember my original childhood set being a bit spotty, too. 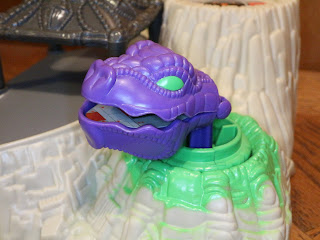 * The alien creature is pretty cool looking, though. If you pull the "neck" down you can have it chilling out here kind of like the big snake on Snake Mountain. You know, just sitting here being a big, bad menace. 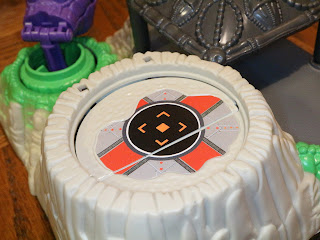 * On top of the largest crater at the back left of the playset is a well marked landing pad. This one definitely doesn't seem to be an alien of any kind. 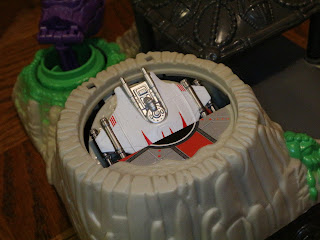 * Hey! It turns out this one actually reveals a secret entrance. It kind of reminds me of something out of Thunderbirds. The landing pad folds down, allowing the landing craft to enter into a secret hangar. 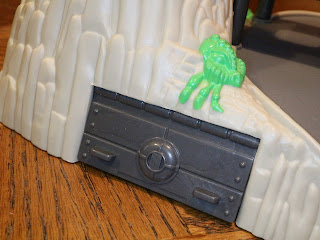 * On the side of the crater is a heavily armored door that leads into this secret hangar. 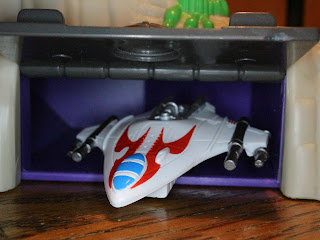 * Just fold it up and you can see your ship just chilling out inside. 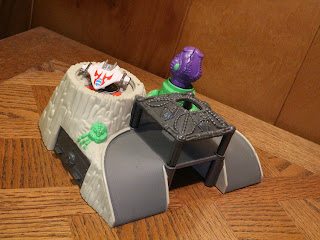 The Alien Pitfall is a pretty cool playset. It's actually the only Galaxy Voyagers set I've ever owned (I'd love to pick the others up) but the quality seems to be on par with most other Micro Machines sets from the time. There are a few cool play features here although the lack of microfigures of any kind definitely doesn't make this as exciting as the Star Wars or military sets. Still, there are some great features here that could help this set to easily blend in with your Star Wars sets if you've got the imagination. It's a Great set and a fairly inexpensive pick up if you're curious about this little largely unexplored area of Micro Machines history.