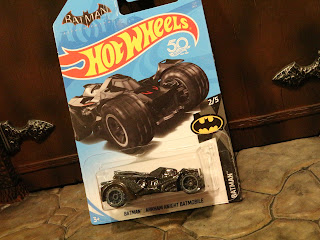 I'm always down for snatching up a Hot Wheels Batmobile and while out at my local Wal-Mart last week I stumbled across an updated version of the Arkham Knight Batmobile. Hot Wheels released the original version of this model in 2015 as part of a Wal-Mart exclusive series but this one has a better color scheme and some enhanced paint applications. It is number 2/5 in the Batman subset and number 112/ 365 overall. Let's take a quick look at this new model after the break... 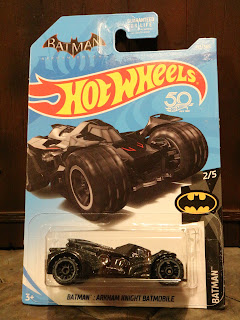 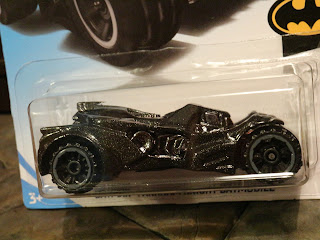 * This is the exact same model as the 2015 release but now the Arkham Knight Batmobile is all black and features some cool red trim on the top sides and on the hood. I couldn't get a picture due to this being packaged as, strangely enough, Hot Wheels Batmobiles are pretty much the only toys I own I keep in the package. 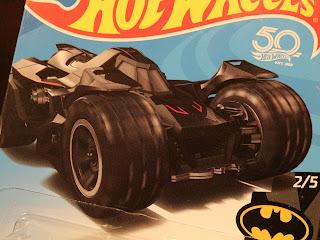 * While the model is cooler than the 2015 version, the packaging isn't as interesting. This is pretty standard Hot Wheels packaging. 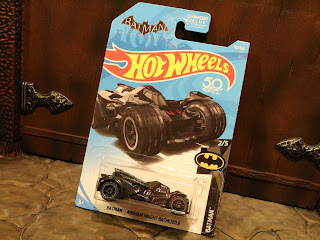 For $1, picking up this Arkham Knight Batmobile is a pretty slick deal. While the game's constant use of the Batmobile may have gotten tedious, there really isn't much about the design itself that can be faulted. It's a nice looking Batmobile that takes the coolest elements from a number of modern Batmobiles and delivers something cool. The enhanced paint applications here definitely make this a Great pick-up.

If you're looking for more Hot Wheels Batmobiles, check out the following: