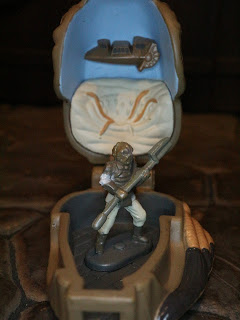 One of the older toylines that I'm always working on trying to complete is Galoob's Star Wars Micro Machines. It's easily one of my favorite toylines ever and it is one of the toylines that my daughter and I regularly play with too. She has a real affection for it and is a great inspiration/ enabler in encouraging me to continue picking up pieces that I missed out on over the years. My goal is to one day have the most comprehensive archive of Star Wars Micro Machines reviews on the internet so today I'm introducing the first Mini Head review into the mix. Near the end of 1996 Galoob introduced the Mini Heads into the Star Wars Micro Machines line. Sold in four packs of three, each set included three miniature character heads that unfolded into a miniature diorama for the specific included microfigure. They remind me of the Mighty Max Shrunken Heads sets from the early/mid 90s as the focus is more on getting a unique microfigure to use with your other playsets. While the second series of Mini Heads were not sold at retail in the USA, 12 of the 16 new heads were released as promotional giveaways through Pizza Hutt in 1998. This was a really cool promotion although I remember it being difficult to find the sets (I only ever scored two back in the day). Internationally the Weequay was sold in Collection VI along with 2-1B and a Royal Guard but through Pizza Hutt he was available in a labeled plastic bag. I recently picked up the Weequay and I'm pretty pleased. While Galoob released quite a few Jabba the Hutt themed playsets they never did include any of the skiff guards. This particular Weequay (sometimes called the Weequay skiff guard) is officially named Pagetti Rook and he was onboard the same skiff as Luke, Han, Chewie, and Lando. Even if you're not familiar with Pagetti Rook's name, you probably recognize him thanks to his appearing in one of the best scenes in the Original Trilogy and appearing in Kenner's vintage toyline. Let's take a closer look at the Weequay Mini Head after the break... 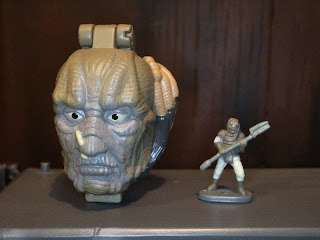 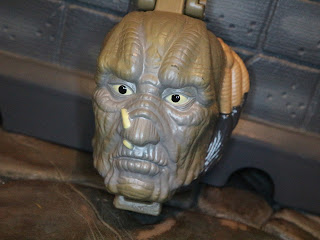 * Overall the sculpt of the Mini Head is pretty impressive. Galoob did a great job on texturing the skin, adding the bone through the nose, and adding the funky braids on the side. This seems to be the mask they based this sculpt on, although while the bone is visible there I'm not sure it is visible in the film. Also, isn't it kind of weird that this Weequay has eyes? Some of them do and some of don't, but I typically don't think of this guy as possessing visible eyes. 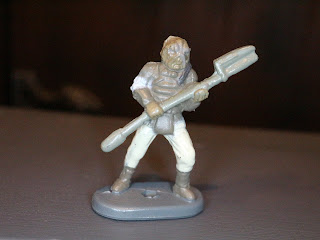 * The microfigure of Weequay/ Pagetti Rook is quite impressive. This was definitely around the point when Galoob's sculpting on these little guys was at the top of their game and the amount of details on this guy is mind boggling. I love the quilted vest, the visible wrinkles on his face, and his super cool vibro-axe. He was definitely a welcome addition to the roster of microfigures in the line due to the lack of Jabba's minions. 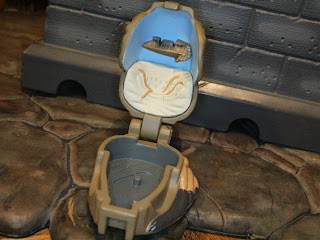 * When you open up the Mini Head you get a small diorama display scene to display the figure on. The base looks like a series of wooden panels so I'm assuming he's either standing aboard the Khetanna (Jabba's Sail Barge) or aboard the second skiff. There is a skiff in the background hovering over the Sarlaac pit. The figure attaches to the base via a small foot peg to aid in displaying this safely. 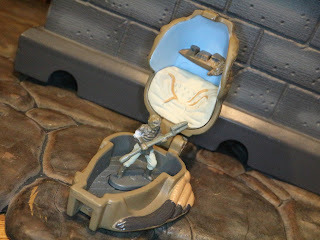 Some of the Mini Heads seemed a bit redundant (why did we need another Darth Vader or Stormtrooper when we already had dozens of them in the line) but the Weequay was definitely a solid addition to the line. The base is kind of fun but the microfigure of Pagetti Rook/ the Weequay is the selling point. Galoob released some fun product and this one is a Good and a 1/2 one, especially considering it was a Pizza Hut promotional.