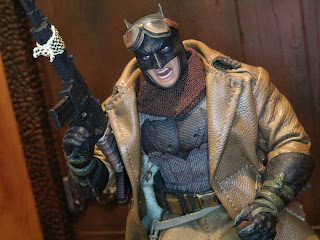 I've had him for a couple of weeks now but I'm finally getting around to reviewing my first 2018 One:12 Collective release (Deathstroke was technically a 2017 release): Knightmare Batman. Despite your feelings on the film overall, I think most of us can agree that Batman V. Superman: Dawn of Justice had some excellent costume designs. One of my favorites from the film is the "Knightmare" Batman costume that Batman sports during his post-apocalyptic nightmare of a world where Darkseid and the minions of Apokolips have invaded and Superman rules the Earth. It's different than what we typically see from Batman, offering up something that is quite new and different than nearly anything we've seen before. Mezco started showing this figure at conventions but cancelled it early last year for some reason. Due to collector backlash, however, Mezco offered it as their own website exclusive and the figure sold our pretty quickly. Now that he has shipped the demand has skyrocketed and the figure is selling for quite a bit above the original retail price. Is the Knightmare Batman worth picking up, though? Find out after the break... 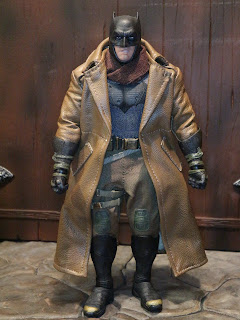 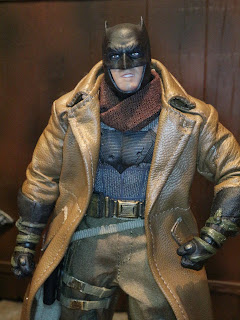 
* Knightmare Batman has one of the most complex outfits of any One:12 Collective figure yet. You've got Batman wearing military styled pants, the Batman chest piece (I assume he is supposed to be wearing the full costume under the pants), a scarf, and a trench coat, mixed in with sculpted gauntlets, boots, and various belts and holsters. Overall, Mezco has done a great job of capturing the likeness of the costume seen in the film and effectively mixing together soft goods with traditional sculpted elements to create an impressive looking figure. 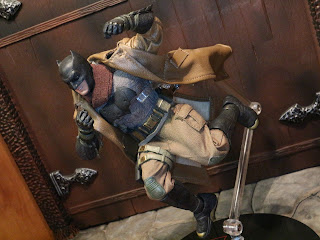 * The articulation overall is quite good. While he has trouble holding weapons two-handed (more on that in a minute), the rest of the articulation is as good as the standard BvS Batman figure only with the restrictions provided by the trench coat. The quality is quite good and feels as sturdy and durable as any other One:12 Collective figure. 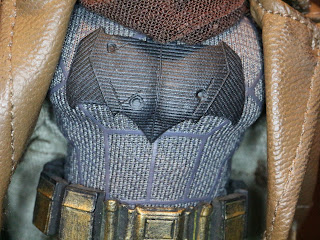 * The chest armor is very cool. It has the same pattern and style as that of the standard BvS Batman but it has various spots on the armored bat that look like dings from bullets. 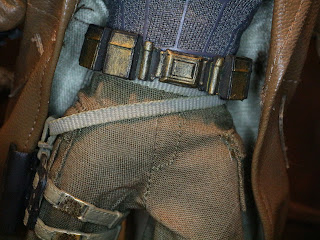 * Batman is sporting his utility belt as well. It's a great sculpt and the paint job looks more battered and weathered than the utility belt on the standard figure. 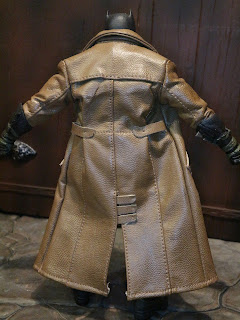 * The trench coat is a very nice piece with lots of impressively precise stitching and an overall good fit. The shoulders are a bit large, but we will get to that in a minute. The sides of the coat even have wires in them which allow for a little extra expressiveness when posing the figure. 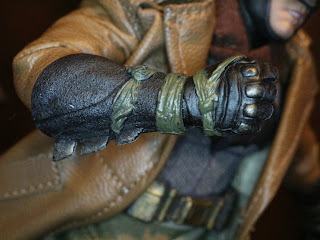 * Batman's gauntlets are great. Not only do they look sharp and feature some good paintwork but they're also sculpted to look like they have some sort of green cloth wrapped around them. 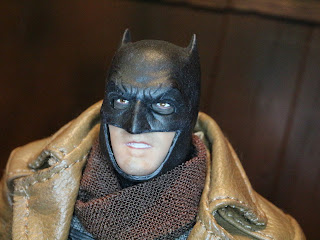 * Knightmare Batman comes with three different headsculpts, all different than the headsculpts included with the standard Batman figure. First up is a Batman with gritted teeth. Mezco does a great job of making the face actually appear like it is a real head underneath a mask and the paintwork on the eyes is excellent. This headsculpt looks incredible in person. 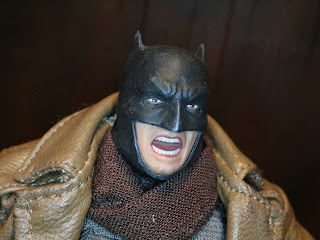 * My favorite of the three headsculpts is the screaming Batman. It is just so gosh darn intense! I love it! 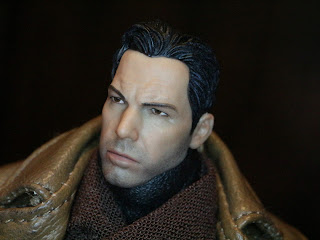 * Last up is an unmasked Bruce Wayne head. This is an excellent headsculpt with impressive paint applications but the likeness to Ben Affleck comes and goes. From some angles it looks just like him while at other times the likeness is a bit weaker. Regardless, it is still a really good headsculpt and definitely worthy of a Positive point. 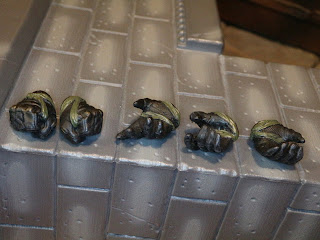 * Knightmare Batman comes with 5 interchangeable hands: A pair of fists, an open right hand, a trigger grip right hand, and a standard gripping left hand. They swap out easily and give you a few options when displaying the figure. 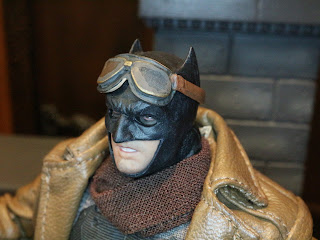 * The goggles are appropriately sized and can fit over any of the three head sculpts. They also have a really cool dust effect on the lenses. 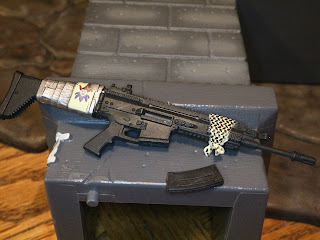 * Batman's primary weapon is an FN SCAR-L rifle. The rifle has fantastic detailing, a handkerchief wrapped around the front, a Joker playing card duct-taped to the stock, and a removable magazine. It does not have the sling used in the film, however, which seems like an odd oversight. The barrel is hollow and will hold the muzzle effect accessory included with this figure and the Punisher. 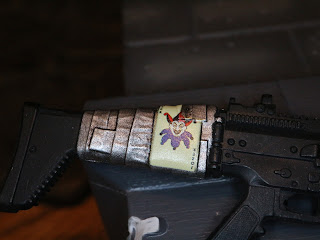 * The Joker playing card on the stock is just a really cool detail and the paintwork on such a small item is very neat and clean. 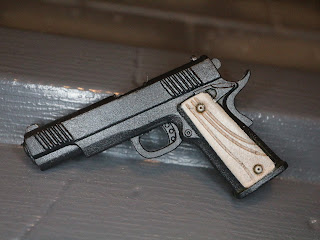 * Batman's Colt Mk. IV Series 80 pistol is an impressive looking accessory all the way down to the grips. I love the detail on these. It also has a hollow barrel so that it can utilize the bullet effect accessory, too. 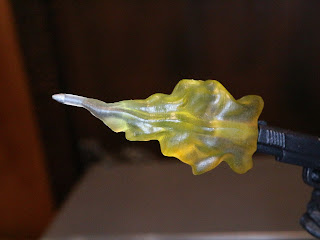 * Batman comes with a muzzle effect for one of his weapons similar to the Punisher figure. Not only does it depict a muzzle flash from the barrel of a gun but it also features a small bullet at the end flying forward. This looks really impressive on display! 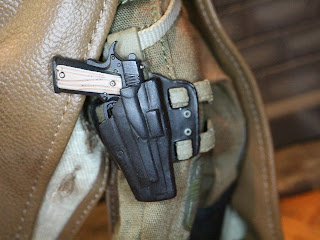 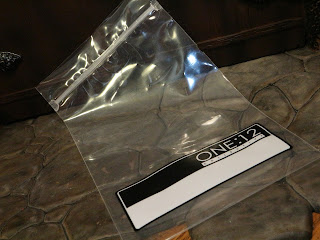 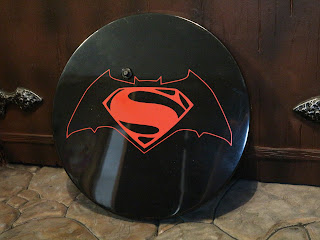 * Like the other One:12 Collective figures, Knightmare Batman features a round display base featuring the BvS logo. The logo is emblazoned on the base and an off-centered peg helps to keep the figure nice and secure when standing up. 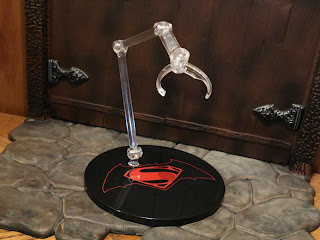 * There is also an articulated display arm that can be inserted where the peg is (you just have to remove the peg). You can get some great, secure poses here as the joints are very nice and tight on the display bar. It can absolutely support the figure's weight if you want to depict Bruce leaping through the air and taking out Superman's minions. 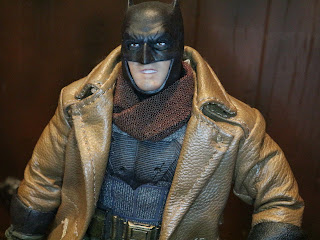 * I mentioned earlier that the coat overall looks pretty impressive. The only problem is that the shoulders and lapels/ collar look a little oversized, making the figure look like he has an overly short neck or a hunched back. 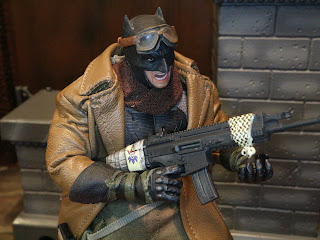 * I'm not sure how it could have been improved but due to the bunching of the jacket at the elbows it is incredibly difficult for Batman to take natural two handed gripping poses with the rifle. 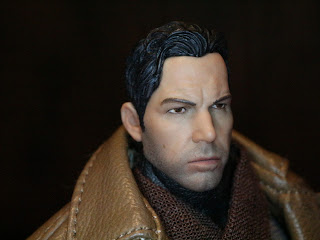 * I mentioned above that the Ben Affleck likeness comes and goes. From this angle does the sculpt look like Ben Affleck? I'm not really seeing it that much here. I think it's the ears, the hair, and the lips. 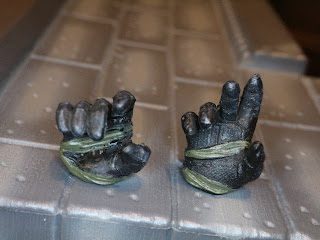 * One of the most frustrating things I've noticed with certain One:12 Collective figures is that they don't include left and right handed versions of the hand sculpts. Why does Batman only have a trigger grip for his right hand? What if I want him holding two guns. Furthermore, why does the cradling hand for the rifle only come with the right hand. This should be on the left hand at least so that he can actually hold the weapon with both hands. What an odd thing to leave out! 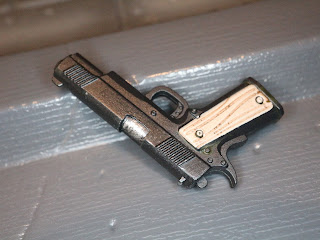 * Remember how the Punisher's pistol had a working slide and a removable magazine? Batman's Colt has neither of those features. For coming with fewer accessories than some other figures I wish Batman's pistol at least had the functionality of most others in the line. 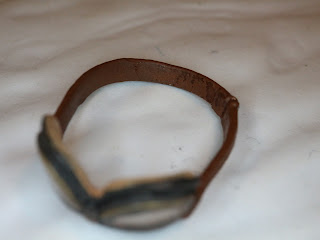 * Oddly enough, the interior of the goggles has some paint flaking that left brown paint on my Batman's head. I had to wipe it off, so it isn't a long term problem, but do be careful if you display him wearing the goggles right away. The paint could possibly stain the figure. 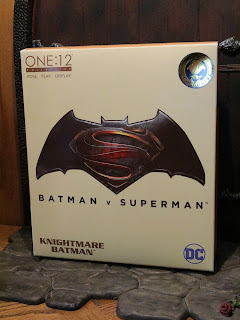 * While the Mezco One:12 Collective figures have typically come with nice 5 panel storage boxes that are easily accessible to put figures and accessories in, the Knightmare Batman comes with a smaller standard cardboard box that feels very light and flimsy. I love the look and feel of the standard boxes and I'm frustrated that Mezco cheaped out with this one. 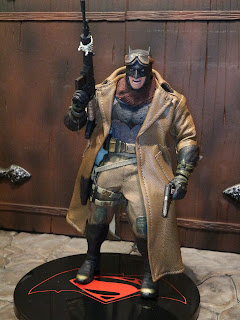 I definitely like this figure. I have some problems with it but most don't take away from my enjoyment of it other than the lack of left handed hand sculpts for more weapon holding poses. Otherwise, this is a very cool figure that nicely captures a fairly unique scene from BvS. While this is the most impressive looking 1/12th scale Batman out there I'm not sure that I like it better than MAFEX's release of the same costume. I would have loved for Mezco to tackle the binoculars and the rifle strap. Still, you're getting some pretty cool stuff here and the figure is well worth the price. This is a Great and a 1/2 Mezco figure and definitely one that I assume we'll be talking about next year when picking the favorite toys of 2018.

I've reviewed so many Batman figures that he has his own review archive: Check out the Dark Knight Gallery!