Action Figure Review: Asuka as the Phantom from WWE Monsters by Mattel 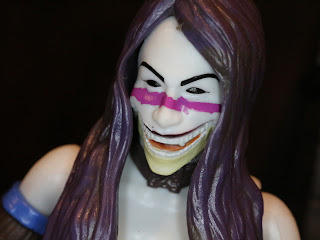 It has been a little over eight months since I last reviewed a WWE figure but something finally grabbed my attention enough again to scoop up another: Asuka as the Phantom from the new WWE Monsters line. I proudly admit that while I'm a WWE fan, the only wrestling figures I pick up these days are Mattel's absolutely crazy WWE lines such as WWE Zombies and WWE Mutants. WWE Monsters is their newest endeavor and it features 6 WWE Superstars as various "classic" monsters. The series includes the Undertaker as the Vampire, Chris Jericho as the Mummy, Jake "The Snake" Roberts as the Creature, Brawn Strowman as Frankenstein, Roman Reigns as the Werewolf, and Asuka as the Phantom. Called the Phantomess of Tomorrow (a play on her title as the Empress of Tomorrow), Asuka mixes together elements of the masked look of the Phantom of the Opera with elements of an Oni from Japanese folklore. It's a great look and easily makes for the coolest figure in this series. I'm a huge Asuka fan and this was a cool way to get an action figure of her to hang out alongside of the WWE Zombies, Mutants, and Wyatt Family collection I have. Let's check out Asuka as the Phantom after the break... 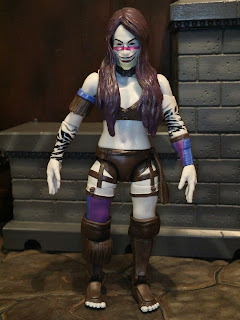 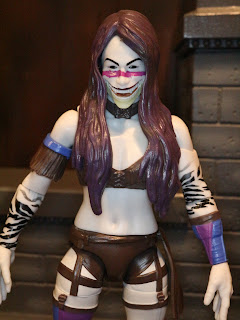 * While the WWE Zombies line is largely just made up of various current and former WWE Superstars in various states of decay there are times in that line and in the Mutants line where the wrestler's personality is used as a springboard to help sell the crazy monster theme of the toy. This really works well for Asuka as the Phantom as she uses masks as part of her entrance garb. The figure is based on her Elite figure from series 47 with a much more subdued and ghostly paint job and a terrifying new headsculpt. 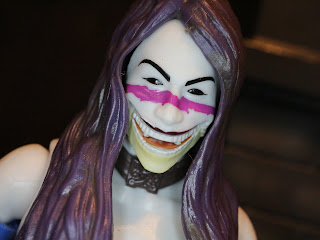 * Yikes! It's only March but if a scarier action figure comes out this year I'll...I'll... sheesh, I don't know. This is terrifying. I mean, this is 100% pure nightmare fuel right here. The long jaw, the extended mouth, and those creepy, unsettling teeth. Yikes! I love the addition of the face paint, too. This is absolutely one of the most horrific toys I own. Great job, Mattel! 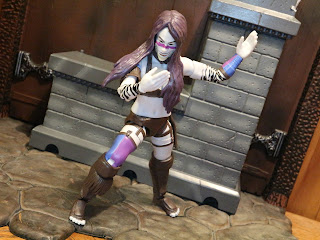 * Asuka has really good articulation. Mattel gives all of the female figures the same articulation, regardless of whether they are the less expensive basic figures or the more expensive Elites, so Asuka has all of the joints you could expect including some "rocker" hinges in her ankles. About the only joints missing are hinges on the wrists. She is incredibly durable and could definitely stand up to the wear and tear play of a child that you want to traumatize. 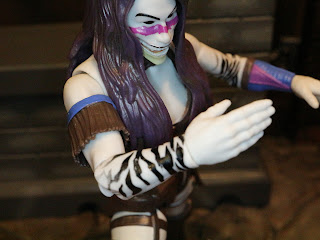 * Asuka has a lot of cool paint apps and various accoutrements on her arms. Her right arm has a bicep wrap with tassels (it is a separate piece) while both arms have some interesting zebra striped tattoos. Pretty cool stuff, really. 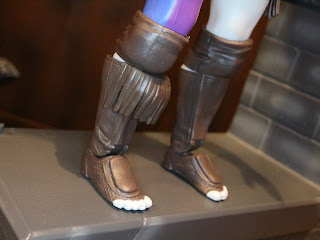 * The boots are also pretty rad. Lots of interesting features on them. 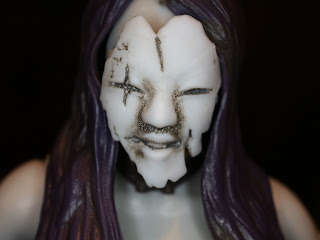 
Geez. Asuka's "Phantom" mask is terrifying. This is the most disturbing thing I've ever seen. It kind of looks like Simon Dark's face but much, much creepier. Much creepier. This is absolutely messed up. 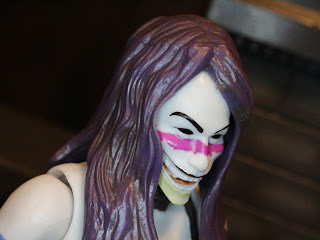 I know that this is "monster" Asuka and not normal Asuka but there is definitely something off about the hair. It looks like it sits up way too high on her head. Also, it looks very rubbery and just like a big lump.

* One of Asuka's signature expressions is holding her mask up to her face. Due to her permanently open hands, this Asuka can't even grip her mask. 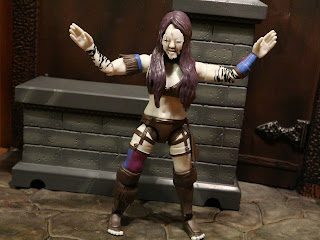 Due to the head sculpt and the absolutely freaking insane mask she comes with Asuka is one of the creepiest action figures I've seen in quite some time. There is something genuinely unsettling here and, I gotta be honest, I'm digging it. She's a very cool figure and something that even horror fans who don't care about wrestling could likely get behind. She's a Good and a 1/2 figure and definitely an interesting site at mass market retailers.