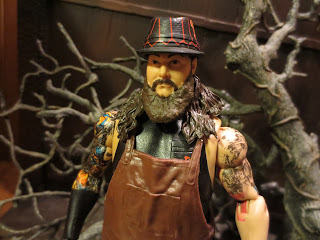 Today is Re-Halloween! I started doing a bunch of horror movie reviews back in September, I did at least one horror themed toy review a day in October, and for the seven days of Re-Halloween in November I've been doing another bonus horror themed review. It's been fun but it's also been a ton of work! Today as I'm off celebrating Re-Halloween (the plans are to go see Paranormal Activity: The Ghost Dimension and then to watch Halloween and Trick 'r Treat at some point) I'm leaving you in the company of my favorite WWE Superstar: Bray Wyatt. The New Face of Fear, Wyatt and his followers Erick Rowan, Luke Harper, and newcomer Braun Strowman always put on an interesting show. I'm not sure what will happen with the Wyatt Family's recent kidnapping of the Undertaker and Kane but I'm sure it will be interesting. This is actually the third Bray Wyatt figure I've reviewed and this one features his outfit from SummerSlam 2014 when he beat Chris Jericho. Ready for a closer look at Bray Wyatt? Then follow the buzzards and join me after the break... 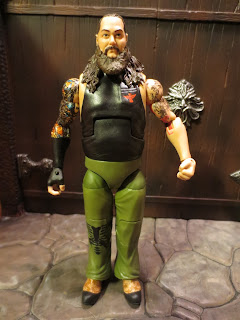 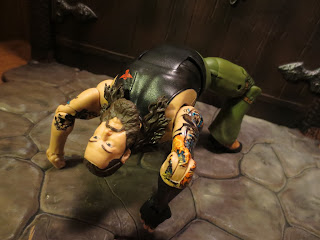 *While this figure's body is a reuse from the series 28 Bray Wyatt it still works just fine here. Bray Wyatt has all of the articulation you'd expect from a WWE Elite figure while still preferring Bray's huskier frame. And while the headsculpt isn't designed for it, you can absolutely put Bray in his creepy spider-walk pose. 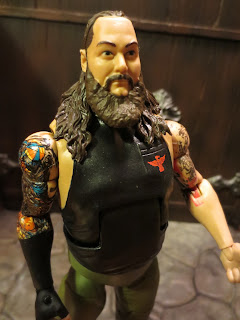 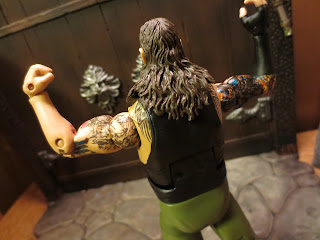 * Wrestler Lawrence Windham Rotunda has lots of tattoos on his arms and back and Mattel has pretty faithfully captured them here. There's a lot of nice color and clean stamping here. 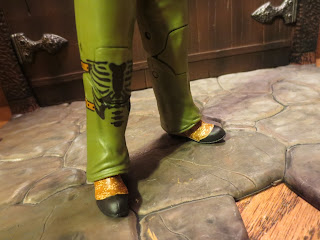 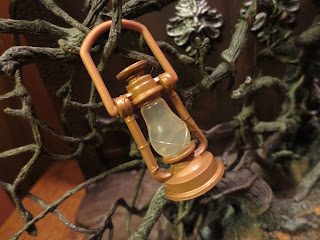 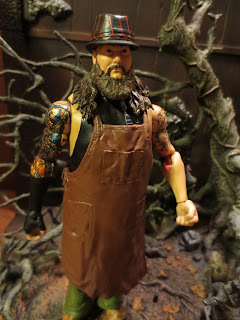 * What really sells this figure is the apron. Wyatt's worn the apron on a number of occasions (the one that stands out in my mind the most was when he appeared at Money in the Bank 2015 to sabotage Roman Reigns) and it's a cool piece to have. It's made from a flexible, rubbery material and is really easy to put on and take off. He also has one of his signature fedoras repainted with red trim. 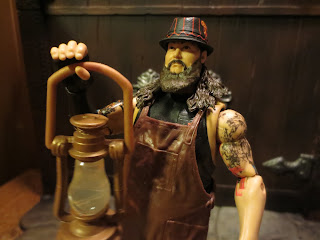 *There's nothing technically wrong with this figure and while did Mattel did make a new headsculpt, I wish they'd do one that resembled Wyatt when he's in the ring fighting. The sweaty strands of hair that hang over his face are definitely part of his look and convey the idea that he's a madman who just loves being in the ring. 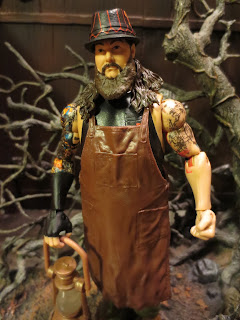 Being a huge Bray Wyatt fan, I'm pretty happy with this figure. Bray's a very visually interesting character and I always love to see what weirdness he'll be up to next. This is a quality figure that comes with three good accessories. That's not a bad deal. Yeah, there's a lot of reuse, but none of it feels forced. I'd give this one a Great rating. I'm hoping that we see another Bray Wyatt figure in the future that features the horned hoodie he's been wearing on and off over the past year. It's another great look that I'm sure will transfer well to action figure form.

And I've reviewed the other WWE Elite Collection figures: